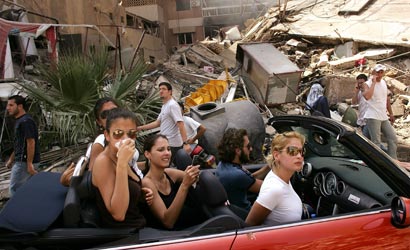 The Lebanese 20-somethings in the shiny red convertible look intrigued but distraught. One holds a cloth over her nose while another snaps a picture on her cell phone of the destruction wrought by weeks of Israeli bombing in south Beirut. Behind the car, men stand atop a building-size pile of rubble. A woman in a headscarf turns away.

“It’s a picture you can keep looking at,” wrote Michele McNally, assistant managing editor at The New York Times, who chaired this year’s jury of the World Press Photo competition. McNally said the photo, taken by Getty Images photographer Spencer Platt, “has the contradiction of real life, amidst chaos.”

The annual World Press Photo contest, based in Amsterdam and judged by an international panel of photographers and editors, is considered the top prize in photojournalism. This year Platt’s image beat out 78,083 images from 4,460 professional photographers in 124 countries.

“This image had been discussed a lot, and I thought maybe this was the one,” Platt said in an interview this morning. “But I honestly never believed it would get photo of the year; it’s the kind of thing you dream about when you’re sitting on the subway.” He got the call from the Netherlands yesterday, not surprisingly while he was on his way to an assignment in Brooklyn.

Platt will receive his award and a cash prize of 10,000 euro during an awards ceremony in the Oude Kerk in Amsterdam on April 22. The ceremony will wrap up a three-day photography program that will include exhibitions of Platt’s work and the other photos chosen by the World Press Photo jury.

This year the jury awarded prizes in 20 categories to 58 photographers from 22 countries. For the first time, this year’s entrants could submit their photos entirely online, which no doubt contributed to growing numbers of entries from usually under-represented countries, especially those in Central and South America. Almost half of this year’s entries — 42.5% — were made online by 1,893 photographers.

Platt, who is based in New York, took the winning image on August 15, 2006, the first day of the ceasefire following this summer’s fighting between Israel and Hezbollah. He had been walking around all day, watching people return to their homes, salvage belongings, or just gawk at the destruction, which he described as “if the Bronx had been leveled, but the rest of Manhattan was intact.”

As usual when shooting for the wire, Platt says he didn’t think too much about this particular photo when he first sent it off to his editors, along with 20 other images from the day. But his boss Pancho Bernasconi, Getty’s director of photography for news, said, “As soon as I saw it I knew it was special.”

Bernasconi called Platt “relentlessly inquisitive,” and said the photographer “always wants to explain things through his photographs. This image kind of stood out to everybody, because it was such a different image from that time, such a different way to look at it.”

Once buzz started to form around his picture, especially in Europe and Los Angeles, where it ran on the front page of the next day’s Times, Platt says he went back and re-examined it.

“For me personally, the immediate reaction I got is that when people see it they say, this is Lebanon, this is the Middle East?” Platt recalled. “People have preconceptions of what it looks like there, and this challenges that — it starts a discussion.”

And while Platt is honored by the World Press prize, he is also humbled when he thinks how serendipitous great photos often are. He only took about five frames of this car of people, and all but this one were obscured by a man walking in front of the group. Worse, Platt was sure he’d blown the shot when an editor asked him if he didn’t have “something wider.” He thought he had lost the shot. Obviously, he hadn’t.

“When you think of the activities that led you [to take a pictures] and how spontaneous it was, that’s what I love about photography,” he said. “That’s what keeps me going, waiting for that moment.”

See all the winning images at www.worldpressphoto.com.