Already a success at 21, Mike Brodie is an exception to the rule. 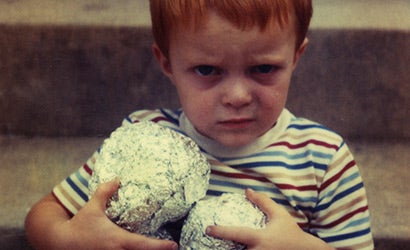 Mike Brodie is barely old enough to drink alcohol legally, yet he’s already achieved something photographers twice his age are still striving for: He makes enough from his photos to keep taking pictures.

Brodie fell in love with photography a few years ago when a friend lent him her vintage Pol­aroid camera. “I took a photo of the handlebars of my BMX bike, and the Polaroid that developed blew my mind!” he wrote in our e-mail interview.

Equipped with a Polaroid SX-70 Sonar OneStep from eBay and stolen packets of its hard-to-find film, Brodie began obsessively photographing the things around him and uploading scans to his burgeoning Website (Google “The Polaroid Kidd”).

The results have blown several well-respected minds, including magazine editors and curators at Los Angeles’ M+B gallery, which added Brodie to its roster and staged his first show in 2006.

Now living with his mom and brother in Pensacola, Florida, Brodie is fleshing out a new project in 35mm film, photographing his friends and fellow travelers as they hop trains around the country.

You’ve said you can’t have a job. Why not?

I think working is great and all, ya gotta make money, but personally I don’t like having time restraints on me. I say this now, but years from now I’ll feel totally opposite I suppose. Haha.

In recent work you have shot people you travel with. Are you friends with the people in your photos?

Photography has made me what I am. It pulls me in all directions. It gives and takes friends, and pushes me to move miles and miles. My desire to photograph these people in the beginning is what led me to develop such great relationships with them; some being relationships that will last clear on ’til the day I die. I’m really lucky ’cause I never used to be this social.

Why are you drawn to photography?

I don’t really like getting into the “why” question; there’s no tellin’ really why people do what they do. Photography is especially important; images are one of the leading medias that shape our lives. There’s so much bullshit out there. It’s nice to see/show things you’ve never seen before.