Photo Books to Write Home About

From Martin Parr's keen sense of color to Stephen Wilkes' images of forgotten Ellis Island, these books are worth a second look. 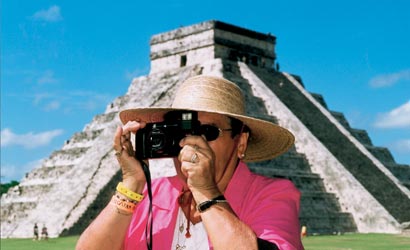 “I’m constantly trying to express ambiguity,” photographer Martin Parr explains in reference to his newly released book, Mexico. Known for his keen sense of color and witty, often ironic delivery, Parr offers here an 81-image study on the impact of American pop culture and technology on traditional Mexican culture. Parr’s flair for vivid hues occasionally borders on the obscene, but more often than not finds its element. The images in the book brim with effusive shades — the fluorescent-pink frosting of donuts, neon toys in storefront windows, the luridly bright vacation attire of tourists — and emphasize exactly where and how America and traditional Mexico overlap in culture today. Close-ups of carefully juxtaposed artifacts and objects — the reds and pinks and teals of the ubiquitous Virgin Mary, interwoven with the equally bright colors of the Simpsons, Mickey Mouse, Spiderman, McDonalds – make up one long, dazzling display that represents, as Parr puts it, consumerism both as “a good and bad thing.” Viewers’ opinions aside on global consumerism, Parr’s images are a brilliant exposition of the sheer vivacity of contemporary culture south of the border.

“For two weeks after shooting the first group of pictures of Ellis, I was obsessed,” Stephen Wilkes writes in the introduction to Ellis Island: Ghosts of Freedom. “I couldn’t sleep, I couldn’t erase the buildings from my mind. … What began as a one-hour editorial assignment became a five-year passion.”

Many are familiar with Ellis Island, the tiny landmass in New York Harbor just off the New Jersey coast, which, from 1892 through 1954, was where approximately 12 million immigrants were processed. (Reportedly, at least 40% of all Americans can trace at least at least one relative’s passage through the island.) Fewer may be aware of its more recent history, since the island was closed down in 1954. It took 22 years of total neglect and disuse before New York reopened the island to the public for guided tours, and another eight years before the city commenced a partial restoration of the administration buildings. In 1990, Ellis Island National Monument opened its newly renovated doors to the public and became one of the most popular attractions to tourists and history buffs alike.

What many of its visitors may not be aware of is that the greater part of Ellis Island — Islands 2 and 3, or the South Side, which house 30 of the 33 original structures — remained untouched up until 2005, when historical conservation groups successfully petitioned grant money to restore the remaining buildings. Northern Island 1, where immigrants disembarked on their gateway to citizenship, is perhaps most enduring as a landmark. But the southern islands, which housed the hospital buildings for physically and mentally ill passengers, tell an equally valid though largely forgotten part of the immigrant experience. These are where passengers who arrived ill or unfit passed time in fitful uncertainty of their chances of staying in America.

Wilkes’ photographs span the years from 1998, when he first set foot on the island, through 2003. The book shows us the island as it will never be seen again — neither the operating Ellis Island as it exists in historic prints, nor the restored buildings that will be open to visitors in the future — but the building as a presence in between. The exoskeleton of the buildings are intact, yet in an advanced state of decay, with paint peeling from the walls, sinks littered with dust and debris, and foliage growing up through holes in the floor and wrapping themselves around the bars of windows. The rooms that Wilkes wanders through do not seem abandoned as much as inhabited by some strange lingering presence. Scraps of furniture, like a chair perched beside the window in a long-forgotten measles ward or a steamer trunk resting as the sole object in an isolation room, litter the floors and hallways as infrequent but startling reminders of the history the buildings contain. It’s these artifacts that are the main element of Wilkes’ images, and are most revealing of the object of the photographer’s obsession, which is — as the title rightly suggests — an island of ghosts.

Those who are readers of the POP PHOTO monthly feature, Nature, are familiar with the breathtaking landscapes of shooter Tim Fitzharris. To see them in a way that truly does them justice, fans will want to check out Big Sky: Wild West Panorama, a collection of 72 15×11 panoramic photographs of the North American West. Taken in 13 U.S. states and two Canadian provinces, these images are a kind of best-of-the-best Fitzharris, compiled over the span of 20 years of exploration and meticulous picture-taking. For those who have never witnessed waves crashing against the rock formations at Garapata Beach, Calif., the mist rising off of Moraine Lake through the Wenkchemna Peaks in Alberta, or the truly iridescent reflections of sunset on the still water off Ruby Beach, Big Sky is possibly the nearest-most-beautiful way to see them after reality. And for residents or travelers of the western region who want to learn how to capture a little of the glory of twilight at Mohave Point, Ariz., or the full color spectacle of spring bloom on the Salt Flats in Utah, Fitzharris shares techniques and tips he’s gathered from his experiences within the pages. With seven sections (one for each major region, including Canyon Lands, Rocky Mountains, Pacific Coast and others), Fitzharris’ book runs the full gamut of truly radiant things you can expect to see if, like the photographer, you have the means, lighting savvy, and wherewithal to set out in search of natural beauty with a load of equipment in an RV. If not, diving into these pages is a good momentary escape from city or suburban life.

Jason Langer’s world, as Michael Kenna writes in the introduction to Secret City, “is a world of shadows and portents, where our intrepid protagonist openly faces and challenges the powers of the night.” While shadows and portents command the black-and-white noir universe captured in the 58-page book, it’s debatable whether it’s true to say that Langer openly faces the powers of the night, or if he merely lurks a few feet away as an eternal voyeur. Figures are silhouetted under streetlamps or behind the closed curtains of a seedy motel, in profile and from behind, stalked unawares by the photographer’s lens. Though we don’t know that these characters are up to no good — the actual crimes go undocumented — the angles of the compositions, framed from around corners and at a distance, suggest that the photographer is pretty sure that they are. It’s printed on uncoated paper, which adds texture to the images as it heightens the suggestion that the work is not intended for public consumption, but is rather a clandestine monograph for the anonymous client, one who holds the keys to the mystery within.

For more on Langer and his approach to Secret City, see our Q&A.