Movie Review: ‘Flags of Our Fathers’

Joe Rosenthal gets short shrift in the new Clint Eastwood movie depicting the raising of the American flag at Iwo Jima. 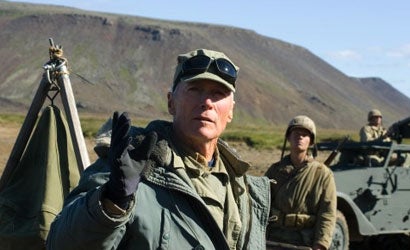 Joe Rosenthal, the photographer who took the Pulitzer Prize winning photograph of the U.S. Marines raising the American flag on Iwo Jima during WWII, and without whom there would be no “Flags of Our Fathers,” is a fleeting figure in the new Clint Eastwood-directed movie. Neither the eponymous book nor the movie pays enough respect to Joe and the other photographers who risked their lives to document the bravery of the men and women fighting the war.

Joe’s camera-toting character comes across as some kind of accidental tourist who has just blundered off of an amphibious landing craft into one of the biggest battles of all time. In fact Rosenthal, a veteran of five Pacific campaigns, was among the first to hit the beach with the Marines when they went ashore a few days earlier.

In the book on which the film is based, written by James Bradley and Ron Powers, Rosenthal is quoted as saying that enemy fire during the initial landing was so intense that, “not getting hit was like running through rain and not getting wet.” Joe not only made the initial landing, but had to fight his way out to the command ship at the end of each day to deliver his film for shipment to Guam where it was processed. As a civilian, he didn’t have to return to that fierce combat, but did time after time, knowing precisely what carnage was taking place there, and that he could well become one of the casualties.

On his way up to the top of the extinct volcano Mount Surabachi on the southern tip of Iwo Jima, Joe meets another photographer on his way down who told him that he had taken a picture of a flag being raised at the summit. Despite missing that event, Rosenthal decided, as any good newsman would, to press on up the mountain to see what else was happening at the top. It’s a good thing he did.

Director Clint Eastwood’s characterization of the second and bigger flag being raised as captured by Joe Rosenthal emphasizes why the actual moment made a much better still shot than a movie. It is very matter-of-fact filmmaking, and the incident is over in seconds. There’s not much doubt that it was that fast when it really happened, and as it is depicted in this Hollywood version. It is almost incidental to the rest of the film, and comes late into the flashback-ridden script. The scene, however, underscores the spontaneity of the moment, hopefully overcoming once and for all the lingering controversy that Rosenthal somehow staged the tableau.

To get the picture, Joe concentrated on the swift action unfolding before him, and angled himself and his Speed Graphic for an unobstructed view, one not showing the other flag being carted off. It was the right choice. One click of the shutter and in a 400th of a second Joe Rosenthal composed the Gettysburg Address of photography.

In the movie, after he took the picture, Joe is heard to mumble something about, “you couldn’t see their faces.” He never said that. His concern, like most news photographers, was whether he had nailed the shot, not about seeing the faces of the participants. One of the great controversies concerning the photograph was who was actually in it, a point explored throughout the film, and ending with a dramatic resolution.

So that is Joe Rosenthal’s 15 seconds of cinematic fame. “Flags of Our Fathers,” of course, isn’t about him, but those who planted the flag and were lucky enough, or unlucky enough, to be in the photo.

Gazing into the rearview mirror of the past and holding them up against events of Vietnam forward, “Flags” portrays the Marines and other government officials as coldly using the three men as the “Heroes of Iwo Jima” in order to spearhead the crucial Seventh War Bond Drive. That fundraising effort was tasked to raise $14 billion from corporations and individuals to keep those still fighting WWII in guns and ammo. It paid off and then some. The effort led by the three men netted almost twice the goal, $26.3 billion, which added up to more than $3 billion a week for their eight-week tour around America. If in fact they were being used, it was to great advantage, and it was a factor in ending the war. One imagines that you could also make the claim that anyone ordered to “take that hill” was also being used by the military and the government.

The movie, like too many veterans of war who saw fierce combat, is bereft of emotion. One notable exception is a scene with Ira Hayes, played brilliantly by Adam Beach, hugging the mother of Michael Strank who was one of the flagmen and his friend later killed on Iwo Jima. The hug goes uncomfortably on and on, and tears stream down Ira’s face, until he finally has to be separated from her. That moment puts an exclamation point on an overall performance that could very well win Beach an Academy Award.

Clint Eastwood’s directing is an unflinching look at combat, and except for one perplexing example, no moment of gore or evisceration is spared. A severed head on the sand here, an unattached leg there, a gaping hole in a Marine, guts spilling out onto the dark sand to the right, Japanese soldiers turned inside out after killing themselves with grenades to the left. But in a moment of curious directorial cop out, Doc Bradley discovers his close friend who had been tortured and killed by Japanese soldiers in an unspeakable fashion. In a close-up, backlit image, Bradley looks at the body and his expression hints at the horror he is witnessing. The audience is spared this hideous scene, having been spared nothing else. The problem with not sharing the awfulness, as we later find out, is that this was the precise moment that tormented Bradley for the rest of his life. Throughout the movie Bradley calls out for his dead friend in his sleep, and then consciously right up until his last breath almost 50 years later.

As with most of the men who made it off Iwo Jima alive, the guy who took the immortal photo also didn’t consider himself to be a hero. Joe once said, “To get that flag up there, America’s fighting men had to die on that island. What difference does it make who took the picture? I took it, but the Marines took Iwo Jima.”

— David Hume Kennerly won a Pulitzer Prize for his photographs of the Vietnam War.