Somewhere on the coast of Maine a much-loved photography program is reinventing itself. 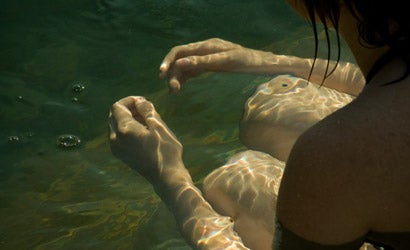 Jay Maisel has put his Maine Media Workshops class on the spot by asking its students to ask him questions. Most of the diverse photographers around the big table know him well enough at this point to hesitate, and they keep their mouths shut. But one brave class member takes the leap. “What colors are you attracted to?” she asks Maisel, one of photography’s great colorists. “That’s pathetic,” he says, predictably but in good fun. “That’s like asking what’s your favorite f-stop. F-you?”

Maisel goes on to say that there’s no such thing as good or bad colors, it’s just how you use them, then softens up and admits that he’s working on a project he calls “the reappearance of red.” Digital capture, which he has switched to entirely, is up to that challenge, he avers. “I wish I hadn’t stocked so much Kodachrome.”

The wisecracking photographer gets off track, which is when he’s at his best, and explains why he’s never done celebrity portraiture. “I couldn’t deal with their personalities,” he says. “I’d probably end up telling the guy to fuck off.”

“Was that a good question?” asks the student. And the repartee continues.

Jay Maisel is teaching in the quaint Maine coastal town of Rockport for the first time in many years. He is part of a new creative energy weaving through the Maine Media Workshops’ crazy-quilt campus, an energy fueled by big changes at what was America’s first large-scale photo workshop, founded in 1973 by photographer David Lyman. Formerly, and famously, known as the Maine Photographic Workshops, the institution had become both insolvent and staid in recent years, falling a bit behind the learning curve of the technological changes transforming photography.

The program’s revised name reflects an important and timely expansion of its curriculum, which has long featured both photography and film, into the multimedia world. Download its new catalog at TheWorkshops.com and you’ll find the unlikely “Web TV,” a class where you can take your YouTube videos to the next level. (Who knew there was a next level of YouTube?)

Which is not to say that the Maine Media Workshops has abandoned the photographic ethos and discipline that brought it into being. Sniff the wafts of fixer as you stroll past its Haas darkrooms (named for the influential colorist), where up to two dozen people dodge and burn under the tutelage of experts such as legendary printmaker George Tice and RIT’s Willie Osterman (who made late prints for Ansel Adams), and visions of middle gray dance in your head. Educated noses may even detect a whiff of nonsilver processes. Walk ten minutes to Union Hall, once Rockport’s town hall, and the exposed rafters, bare brick, cluttered studios, and informal exhibition space — a far hue from the white on white of Manhattan galleries — remind you that being a photographer still takes more than skill with a mouse.

Even so, back on the main campus classrooms hum with the sound of fan-cooled Macintosh G5 computers and pens tapping at Wacom tablets. Here dozens of workstations are networked to an on-campus service bureau equipped with various digital printers that spew forth hundreds of large and small prints each day. In other classrooms critiques are underway, now as often a matter of viewing digital projections of someone’s “contact sheets” (neatly arranged by Apple Aperture or Adobe Photoshop Lightroom) as it is the old-fashioned practice of studying prints pinned to a wall of Homasote.

The Maine Media Workshops is, in fact, a kind of meeting ground for photography’s rich past and digital promise. Its teachers and students seem to be searching for ways not only to make new imaging technology serve traditional photographic techniques but also to apply photography’s artistic traditions to pictures made with that technology. “Digital technologies have created relationships between media forms that never existed before,” says the school’s new executive director, Charles Altschul. “The boundaries between those forms have broken down, and we think photographers need to broaden their multimedia knowledge to continue as effective artists, teachers, and businesspeople.”

Workshops listed in the 2008 winter/spring catalog are more varied and specialized than any college photo curriculum could allow, and will now be offered in full measure throughout the colder months in which the school previously went into hibernation. They include a course in making enlarged digital internegatives for antiquarian processes (taught by Alan Vlach); another in trendy high-dynamic range imaging (taught by Dan Burkholder); and even one focusing on family storytelling (taught by Anne Day), the last timed to winter break so that families can attend with their children. Other tempting offerings include a class on creating handmade books (taught by Tara Law); 360-degree panoramic photography (taught by Jook Leung); and “The Intimate Portrait,” taught by photographic master and Workshops cheerleader Joyce Tenneson, who lives part time in Rockport.

There is an equal gamut of courses in film and video, and, now, multimedia and animation. Some are even aimed specifically at photographers, covering important topics such as building a Website to promote your work and videography for still shooters, taught by veteran photojournalist Dirck Halstead. And this isn’t all happening just in Rockport, as lovely as it is. “Destination” workshops include a master class with Peter Turnley called “The Streets of Paris”; a sojourn in Kashmir with former U.N. photo chief John Isaac; and ten days of shooting Barcelona with renowned architectural photographer Norman McGrath. There are even classes for photography instructors, including Digital Imaging for Teachers (taught by Jane Pirone of Pratt Institute). Yet the catalog for MMW’s first full summer, with its hundreds of weeklong workshops during peak season in Maine, is still to come.

The Workshops’ rebirth is due to the long labor of ardent supporters, both artists who frequent Rockport and art-minded locals who were able to leverage considerable resources for the cause. Last March this group, which included Tenneson and Altschul, was able to arrange for the transfer of the school’s assets from Lyman (who continues his affiliation as an adviser on its international programs) to a nonprofit corporation. Those assets included the Maine Photographic Workshops, the International Film and Television Workshops, and Rockport College, established by Lyman in 1996 so that the Workshops could offer year-round degree- and certificate-granting programs. (A private financial group bought the Workshops’ real properties and is leasing them back to MMW.)

Rockport College’s programs include a Professional Certificate earned by spending a year of “total immersion” at the Workshops, and a Master of Fine Arts in which participants are mentored by both faculty and visiting artists. (The M.F.A.’s curriculum is actually designed by the student, with guidance from a faculty adviser.) Either program can be undertaken in any of three specialties: photography, film and video, or, now, multimedia. Both program tracks allow participants to draw fully on the resources of the Maine Media Workshops, meaning that students can take summer workshops, attend retreats, and be “in residence” for four weeks if they choose not to live and work on campus. Rockport College even offers a semester-in-residence program in which students from other colleges can attend a 15-week fall term at the school and receive academic credit. A two-year Associate of Arts Degree program previously offered is on hiatus as the school’s new leadership redesigns it for future reintroduction.

The new leadership of the combined workshops and college includes Altschul, who after a stint of teaching at Yale ran Kodak’s seminal Center for Creative Imaging in neighboring Camden then went on to create the nation’s first B.F.A. in multimedia at Philadelphia’s University of the Arts; director of education Elizabeth Greenberg, an 18-year Workshops veteran who was assistant to the great Arnold Newman; manager of the photo program Kate Izor, another alumna who was lured away from a job as Bruce Davidson’s studio manager; Brenton Hamilton, a Savannah College of Art and Design alumnus who has led the Professional Certificate program for 16 years; and Jan Rosenblum, a Cranbrook Academy of Art alumnus who is chair of the M.F.A. program.

With the help of Tenneson and other longtime Workshops teachers, the leadership has brought back well-known photographers who once taught at the school but have lost touch with it in recent years, including Duane Michals, Sally Mann, and of course Jay Maisel. Last summer, photographers from the elite VII agency, including Lauren Greenfield, Eugene Richards, and Ron Haviv, came to the Workshops to participate in a symposium on photographing conflict, moderated by New York Times photo critic and American Photo contributor Vicki Goldberg. Yet part of the new agenda is to attract photographers who have never taught at the Workshops before. One already booked is William Wegman, who will be the focus of a long weekend next June that features his films, paintings, and of course photographs of generations of Weimeraners. This will be Wegman’s first time at the Workshops in all the decades that he has summered in Maine.

And what about going to school so far from the cultural amenities of the city? Most of the Workshops’ students would tell you that its remoteness is, in fact, a creative asset, not a shortcoming. It offers an environment largely free of life’s daily distractions, one in which food and lodging are taken care of with style. (In the warmer months students eat at tables under a big tent, choosing from a buffet that transcends any college cuisine this writer has experienced.) The setting is, of course, beautiful. What better place to face your creative demons? 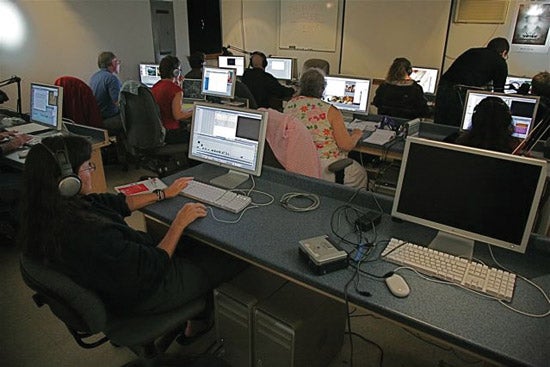 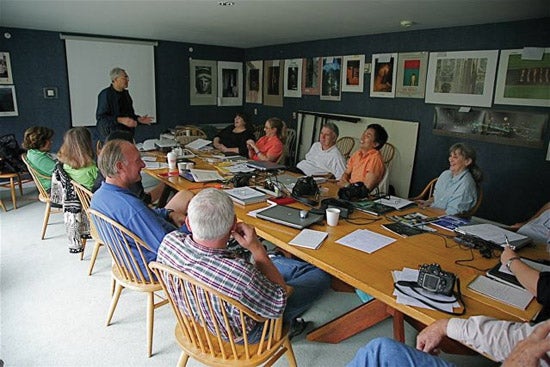 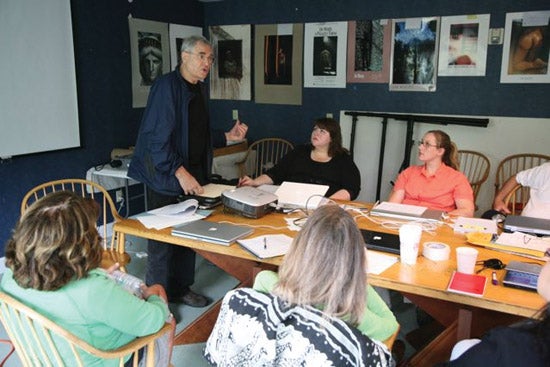 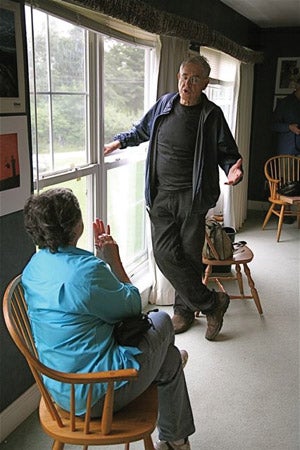 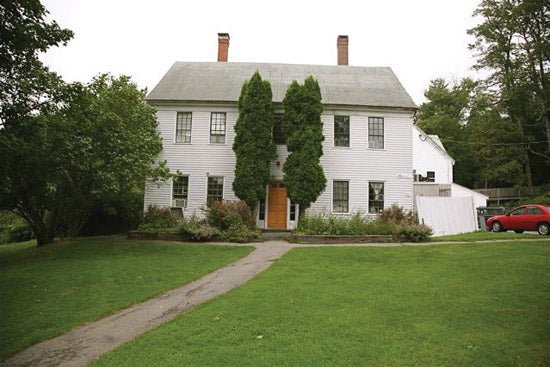 The homestead, a student residence at the Main Media Workshops. 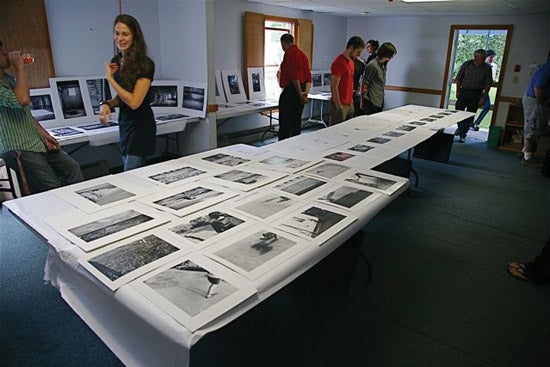 A viewing of work by MMW work-study students. 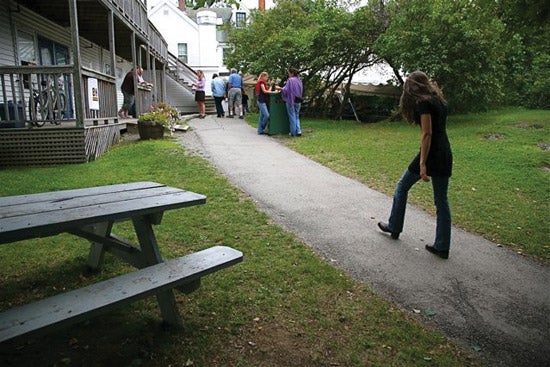 On the way to MMW’s new imaging center and dining tent. 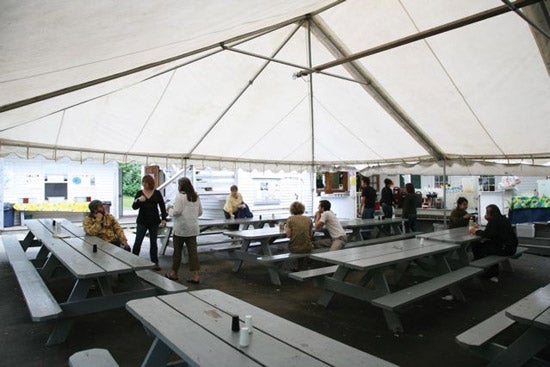 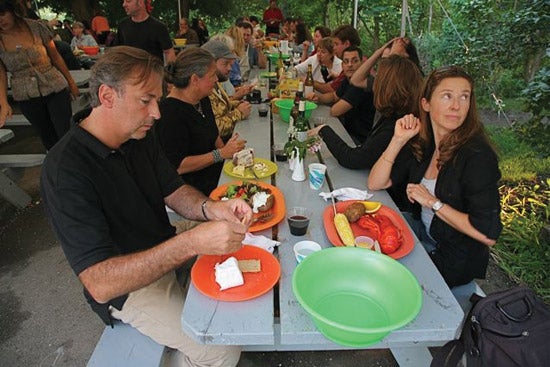 MMW students feast on Maine lobster under the dining tent. 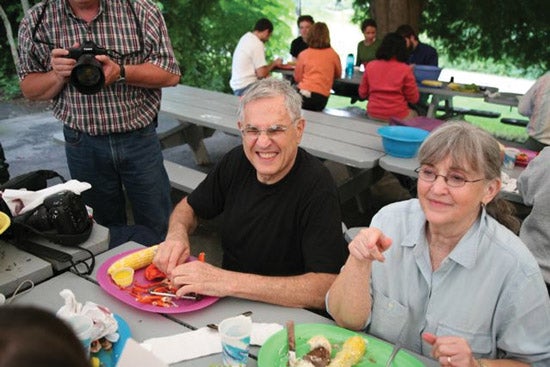 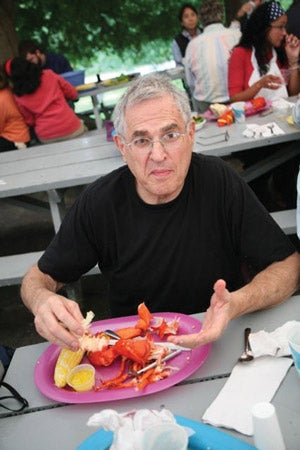 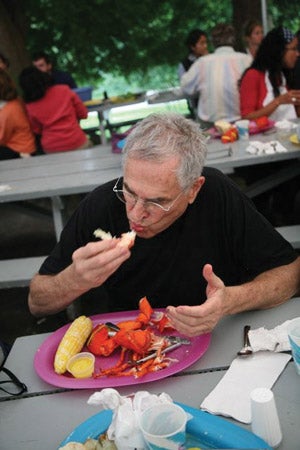 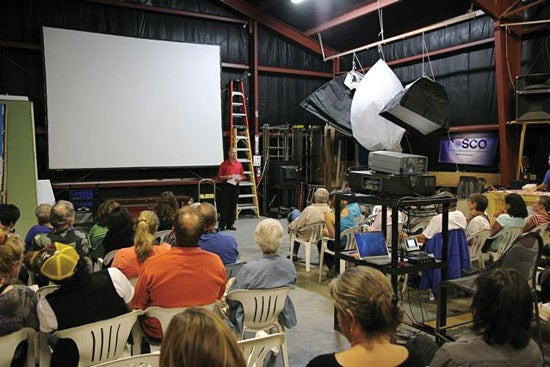