The documentary photographer's magnum opus on war and its lasting effects on survivors took her to 30 countries. 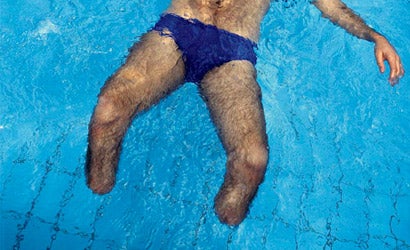 Five years was about how long Lori Grinker thought it would take to document the stories of former soldiers; she was only off by a decade.

Afterwar: Veterans from a World in Conflict (de.MO), a 248-page collection of intimate color portraits and searing first-person accounts of postwar existence was published in March, 2005 — 15 years and 30 countries after she began the photographic odyssey.

Grinker’s timeframe was based partly on her previous long-term project, The Invisible Thread: A Portrait of Jewish American Women (The Jewish Publication Society, 1989), a six-year collaboration with writer Diane Bletter.

One difference was that the concept of Afterwar was not as defined. “When I started the [Afterwar] project, I just wanted to see if they had more in common with each other than not. I had some conflicts in mind — Arab-Israeli conflicts and Vietnam — but I didn’t have a clear plan, just a hunch that there was a larger story to be told,” says Grinker, a longtime member of the Contact Press Images photo agency.

The germ for the massive project came to her three years earlier, on a self-assignment to the Israeli and Occupied Territories in 1986. Her intention was to produce a photo-essay about Arab-Jewish cooperation, but she didn’t witness enough instances of such cooperation on the eve of the First Intifada. “The image in my head was that I would have an Arab and a Jew at a table discussing their postwar experiences,” she recalls. In lieu of that, she visited a rehabilitation center where she interviewed and photographed injured and maimed soldiers whose accounts of a tortured and isolated postwar life echoed those of Vietnam veterans from the U.S. “Their reception at home was radically different,” writes Grinker on her Website (www.lorigrinker.com), “yet their alienation, nightmares and pain seemed strikingly similar.”

It was only in the mid 1990s, however, that the shape and scope of the project emerged as Grinker began to cover more stories of ex-combatants, beginning with a photo-essay for Life on Vietnam vets from the U.S. returning to Vietnam in 1989. Other assignments she generated took her to Liberia, where she documented the impact of war on child-soldiers, Ethiopia to examine the role of women in the Eritrean Armed Forces, and Russia for a story on the meaning of memorials and reunions.

“I began to see that the various images and narratives, taken together, were telling a previously untold story…a story that went beyond the politics of any individual war and when I reached that point I began to expand the focus geographically while sharpening its focus into a cohesive set of images. I wanted to capture the ‘wars’ after the wars are over.” Ultimately, the book — which Grinker likens to a time-capsule — includes 23 wars of the last 100 years, starting with Sri Lanka and peeling back to World War One.

It was as a student at Parson’s School of Design that Grinker discovered her passion for going the distance. She initially planned to become an illustrator, but was knocked out by the power of documentary photography after taking an “inspiring” course with George Tice and viewing groundbreaking books like W. Eugene Smith’s Minamata. While still at Parsons, Inside Sports published her photo-essay on a nine-year-old pugilist, and she continued to train her lens on another young boxer she met along the way — Mike Tyson — for a decade.

Staying with it, acknowledges Grinker, takes a high level of perseverance and the willingness to let the story unfold. “You have to be very Zen about it,” she notes.

“Patience is so important and while photography gives us instant results, a larger project takes a lot of planning and research. And life happens in between the work and it takes a lot of tenacity to keep focused on the larger goal.” For Grinker, there was cancer and her brother’s death. (The book is dedicated to him.)

Funding, too, is an ever-present challenge. Grinker estimates that at least half of her time was spent raising money — a skill she acquired while working on Invisible Thread. “I learned to apply for every grant there is,” she says. Financial support for Afterwar came from many sources including a Eugene Smith grant, the Santa Fe Center for Photography, the Marty Forscher Humanistic Award, and a grant from the New York Foundation of the Arts.

Long-term projects can also be emotionally draining. Grinker says she was “heartbroken” by veterans’ horrific physical and psychic wounds. “There was so much to absorb.” Yet she also learned how resilient and philosophical they were, despite an “aura around them…born of having witnessed something they never should have witnessed.”

For Grinker, the extended project is essentially a way of being, and if there’s a drawback, it’s simply that there’s not enough time. She is currently juggling three works-in-progress: Distant Relations which explores the universal experience of diaspora through the experience of her own family; urban Iraqi refugees’ life in exile; and a new chapter for a possible second edition of Afterwar that will focus on veterans from both sides of the Iraqi war.

“This work is life’s knowledge,” says Grinker. “It teaches new ways to understand the world for yourself and for the viewer.”

If she needed affirmation that Afterwar has opened hearts and minds, she found it at a series of public exhibits. At one show, a student from a military family told her the stories in the book confirmed his decision not to join the service; at another forum a woman spoke of her father’s inability to discuss his war experience and vowed to work with other vets to help them give voice to their demons. At yet another gathering, local veterans of the Iraq and Afghan conflicts said they found it cathartic to learn that ex-soldiers from so many wars and diverse cultures shared the same postwar trauma.

Asks Grinker: “What more could one want from one’s work?”