The in-demand photo illustrator explains how his creations for Esquire, Men's Health and others are done without the aid of Photoshop. 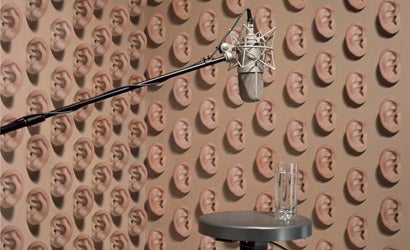 At first glance, professional photographer and photo illustrator Hugh Kretschmer’s work looks like the result of Photoshop wizardry. His surreal photographs reveal other worlds, born of Kretschmer’s imagination, where a man’s body can be firmly set in the ground while his head is, literally, in the clouds; where a giant alien woman attempts to eat all of New York; where tightrope walkers perch gracefully over tiny beds; and where the walls of sound rooms are, of course, covered in ears. Beyond the potency of Kretschmer’s content, though, what’s really amazing is that the bulk of his work is done manually, through a detailed process of collage and assemblage, with minimal digital finessing. Here, we consider the unusual process behind three of Kretschmer’s photographs: Reformed Liar, All Ears and Return of the Thin Man.

It all begins with the sketch, Kretschmer’s blueprint. “The process of sketching enables me to plan the shoot, so that [later] when I have a sketch in front of me, it’s almost like a schematic.” He is meticulous; every angle, every shadow, every aspect of the shot is considered during this phase, streamlining his efforts later.

Reformed Liar was initially intended to complement a story about a writer who challenged himself to give up lying for 30 days. “I usually use a lot of symbolism in my work, and so I wanted to use the Pinocchio nose to interpret that. He’d given up his former self as indicated by hanging up his mask, or a representation of him, on a hook on a wall.”

After a thorough sketching phase, Kretschmer built the plywood set and worked with a representation of the mask on the wall to determine proper lighting. It was crucial at this stage to visualize the end result, so that the angle and lighting of the first shot would match up perfectly with his overall vision.

Next, he placed a layer of tissue paper over the poster board. He drew in the contours of the mask on the tissue paper, and cut along the tissue into the print. This step was delicate and time-consuming. As Kretschmer describes it, it’s like drawing on a 2-dimensional plane, only much trickier. “If a cut is off even a little bit, it becomes glaringly obvious.”

Using another print, he extended the nose further for additional emphasis. Then he mounted the poster board to the wall, connecting the mask’s string to the sides of the print and looping it over the nail in the wall. To give an added sense of three dimensions, he grabbed another print of Shannon, cut a piece of skin from that print, and wrapped the skin around an edge of the mounted poster board.

To give some detail to the shadow areas, Kretschmer photographed the mounted poster board from the front with a single light source, using a Toyo “G45” camera and a 210 mm lens and Fuji RDP III 4×5 film. The camera’s lens had to be at just the right height and angle with the print. “The print is basically facing the film plane flat, so that there’s no distortion or foreshortening, which is critical to make it look realistic. If it’s off a little bit, it will look odd.” Hugh used selective focus to hide little problem areas, such as the space around the eyelashes, which was not as fine as he’d wanted.

Then he worked in Photoshop to finalize the shadow detailing. Because of his careful initial sketching and execution, however, there was ultimately very little retouching to be done.

All Ears was shot for a mid-year article on American music for Esquire magazine. This shot depicts a sound room, its walls covered in ears. In this case, Kretschmer determined the angle of the ears he wanted during the sketching phase, as well as the appropriate lighting, how the shadows were going to appear on the wall, and, “all the little subtleties that you can do in Photoshop easily. But all that stuff gets preplanned ahead of time the way I do it.”

For the shoot, Kretschmer went to a modeling agency and surprised them with his request for “someone with a very nice ear.” Kretschmer acknowledges, “Ears are funny; they’re not necessarily photogenic.” As the shoot was done in the middle of the year, there were some obstacles. “We photographed one ear, so she was lying down, and she had very fair skin, and when she turned over to let me photograph her other ear, it was bright red, so we had to wait a little while for the redness to subside before we could photograph her. I had to be careful not to embarrass her and make her ear go red!”

The ears were photographed on Kodak Portra NC 4×5 film, and Kretschmer made prints on Kodak N Type “C” paper. He and his team cut the prints, and mounted the photos of the ears to the wall with tacky wax. They worked from the corner outward, making sure the cutouts didn’t overlap where the two walls met. Finally, he photographed the entire set with a Toyo “G45” camera and a 210mm lens on Fuji RDP III 4×5 film.

Kretschmer definitely enjoys the process. “It’s really fun. For that particular shot, when everything was up on the wall, the set was dressed and lit, to pull that first Polaroid and to see how realistic it actually looks… it’s very satisfying.”

For Return of the Thin Man, done for Men’s Health magazine, Kretschmer’s approach was a little different. This time, the story was about a writer who’d lost 60 pounds, and described the dieting process from both physical and emotional standpoints.

Kretschmer made the printing process easier for himself by actually pulling the camera away from the initial shot, cutting out the Polaroids and taping them together to make sure that the size relationships were working throughout the process. He shot with a Hasselblad and an 80mm lens on Kodak Portra NC 120 film, and made prints on Kodak Portra N Type “C” paper. Finally, he made his cut outs and carefully assembled them in front of the camera. Again, he used a Toyo “G45” camera and a 210mm lens on Fuji RDP III 4×5 film.

Throughout the process, whether he’s building a set or combining images, there’s little room for error. Kretschmer’s accurate details are what make his otherwise surreal scenes appear so plausible. And the intricate process is probably why he thinks of himself as a photo-illustrator more than anything else.

So why the commitment to a more labor intensive, manual process? “People have asked me why I don’t do this in Photoshop, and I don’t know if I could get this quality. Maybe someone else could; power to them if they can. But me being so sensitive to it, I’d probably be able to tell the difference. I come from a very old school. This is the way I learned and what works for me.”