How To Photograph A Funny Cow

Glen Wexler's new photo book, "The Secret Life of Cows," re-imagines cows as heroes out to save their own species. 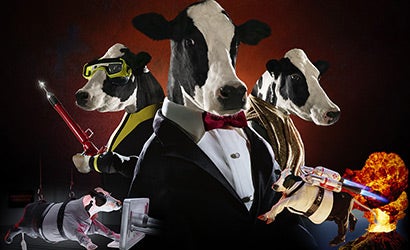 I grew up on a farm, and though it wasn’t a dairy farm I certainly have spent enough time around cows to know their ways. And I must tell you that I have not been impressed by them. Cows at best are contented, but they don’t have much charisma, which may explain why the characters in all those Saturday-morning cartoons I used to watch were rabbits, ducks, chipmunks, cats, mice, birds, magpies, dogs, and bears, but never bovines.

Now I have seen Glen Wexler’s new photo book, The Secret Life of Cows, and I am being forced to re-examine my feeling about cows. More important, in talking with Wexler I learned some valuable lessons on photographing problematic subjects.

Wexler’s pictures, which will also be shown at the Track 16 Gallery in Bergamot Station in Santa Monica from July 7 through August 4, re-imagines cows as heroes out to save their own species-playing against type, since real cows don’t really do that. (You have my word on it.) Simply put, hero cows are funny. (By the way, the comedic opposite is also true: to be funny, a lion had better be cowardly, as in the “Wizard of Oz”; a brave lion, like Mustafah in “The Lion King,” is just a tragedy waiting to happen.)

A successful commercial photographer based in Los Angeles, Wexler has shot a number of very famous album covers for artists such as Michael Jackson, Van Halen, ZZ Top, and others. He’s probably best known for his early and expert adoption of digital technology to create elaborately produced images for advertising clients.

The cow pictures, in fact, came about as an advertising job for the Chick-fil-A restaurant chain. The company’s ad agency had built up a marketing campaign that used cow characters to advocate the consumption of Chick-fil-A chicken sandwiches instead of hamburgers. Wexler was brought in to produce the chain’s 2004 and 2005 calendars.

That’s when the photographic problem solving began. Before Wexler came on board, the photographers hired by the company would simply dress up cows in costumes and shoot them. But, as has been over-abundantly stated here, cows are not natural performers. Plus, as Wexler notes, bovine bodily functions are both unpredictable and frequent.

Instead, Wexler enlisted the aid of artist Charles Rivera to sculpt a realistic one-third-scale cow, from which a mold was made. The mold in turn was used to create foam castings that could be cut up and reassembled into a variety of cow characters.

Each image required about two or three days of principle set and element photography, followed by several days of shooting actual cows that were lit and photographed in perspective to match the sculpted body doubles. Wexler estimates the entire project consumed 600 hours of post-production time. Some of the images required special-effects teams to set off explosions. Elaborate costumes were required for other shots. (This was done by James Hayes, who also costumes the Muppets.)

That’s a lot of work just to make cows look funny. Wexler says the humor of the images comes from turning our assumptions about the “perceived credibility” of photography upside down. Mixing elements of the real world and a fantastical world together creates a surreal, absurd effect, he says.

I intend to contemplate this question over lunch. Guess what I’m going to order…