Ed Kashi and the Importance of Advocacy Journalism

A crusading photographer takes on the dirtiest subject of his career: oil. 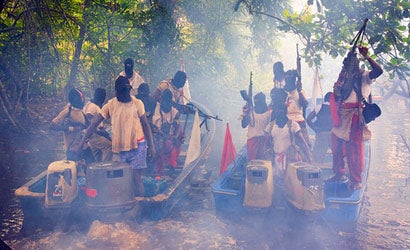 Photojournalist Ed Kashi says, “At the tender age of 50 I became what I always wanted to be.” Kashi describes his trade as “advocacy journalism.” His goal, he says, is to tell visual stories that not only inform viewers but also inspire them to find “activist solutions to social problems.” Kashi, a longtime contributor to National Geographic magazine, has earned a reputation as a dogged journalist, covering the plight of the Kurdish people of Iraq and working in troubled areas such as Northern Ireland and the West Bank. But his career breakthrough occurred in 2003, with a project called Aging In America: The Years Ahead. The tender look at the issues of aging was at the forefront of a new approach to photojournalism — an approach that combined still photography, video documentary, an award-winning book, and a resource-laden website to reach as wide an audience as possible.

Kashi’s latest project, about the oil industry of the Niger Delta region of Africa, takes his notion of advocacy journalism to a new level of sophistication. First published as a 30-page feature in National Geographic in 2007, the work has been leveraged in a number of media, including a website (www.curseoftheblackgold.com), an eight-minute multi-media piece, an exhibition at the George Eastman House museum in Rochester, New York, that runs through September 1, and a new book called Curse of theBlack Gold: 50 Years of Oil in the Niger Delta (powerHouse, $45). The work focuses on Nigeria, one of the world’s largest producers of oil. Despite the riches the country has earned from this valuable resource over the past 50 years, its people live largely in poverty, the result of rampant corruption and a form of government the New York Times has called a “brutal kleptocracy.”

“Of all the places I’ve been as a photographer, I’d never seen such an example of injustice,” says Kashi. Coming at a time of climbing oil prices and potentially catastrophic climate change due to fossil fuel consumption, Kashi’s images are a reminder of the human cost of the world’s oil dependency. “I came away from this project feeling that oil is just this nasty, dirty stuff,” says Kashi. “It pollutes everyone and everything that it comes in contact with.”

American Photo: It’s a remarkable moment in history to bring out this big project on oil, a subject that seems to be dominating the news.

Ed Kashi: I think our response to the current oil crisis will be one of the defining issues of humankind.

AP: Like a lot of people, I associate oil production with the Middle East. So it’s interesting that you are focusing on another oil-producing region.

EK: This year marks the 50th anniversary of oil production in the Niger Delta. America buys half the oil produced there. That means that all of us in America are burning Nigerian oil — far more from there than from the Middle East. So we have a real interest in Nigeria.

AP: How did you get started on the project?

EK: In 2003 I went to Iraq to cover the aftermath of the American invasion there, and when I came back I was invited to give a lecture about my experiences at my son’s school in San Francisco. One of the parents who attended the lecture was Michael Watts, a professor at the University of California at Berkeley and a human-rights activist, and afterward he came up to me and told me about the situation in the Niger Delta. He’s been going there for 30 years and was working on a book about the area. He said we should work together. That was in December 2003, and by the following July I was in Nigeria shooting.

AP: And what did you find there?

EK: I’ve never been so gripped by a subject. There has been $600 billion of oil wealth accumulated in the Niger Delta over the past 50 years. This area should be as rich as Kuwait — the people should be living in wealth. But the fact is that most Nigerians live in crushing poverty. There are various reasons for this, of course. Nigeria is not a small Arab country in the Persian Gulf; it is the most populated country in Africa — one out of five Africans live in Nigeria. But the social and economic injustice is unbelievable.

AP: How long did you actually work there?

EK: That first trip lasted a month or so, and I went back in 2005 and 2006. I pitched the story to National Geographic. That was a turning point. With that backing I had the funding to spend enough time to do the story. More important, it helped me get access to the oil works, which I wouldn’t have gotten otherwise. The oil companies there — Chevron, ExxonMobil, Agip from Italy, Totale from France, Shell, and others — usually don’t allow photographers to shoot their facilities.

AP: Nigeria is known for its institutionalized corruption . . .

EK: All this money, it’s intoxicating. At every level of the Nigerian government, from the national level to the state level to village chieftains, there are kickbacks and a siphoning of wealth into private hands. People love to point fingers at the oil companies for the misery in the country, and those companies could certainly do a better job in terms of protecting the environment and supporting communities. But the real problem is the Nigerian government. In a perfect world, Nigerian officials would be the guardians of their own people. But as a Nigerian environmentalist pointed out to me, even though Nigeria is a democracy, politicians are not really beholden to voters. There isn’t a tax base — government gets its money from oil. So ultimately, the politicians are going to represent oil interests.

AP: Your book explains that this kind of corruption pre-dates oil production in Nigeria.

EK: It really goes back to the 1600s and 1700s, when Nigeria was one of the main African ports for the slave trade. Then in the 1800s it was an exporter of palm oil, which greased England’s industrial revolution. All this time the chiefs and officials in Nigeria have been in the position of receiving foreigners who come and say, we want what you’ve got. And they reply, you’re not going to get it for free.

EK: I’d say it was the most dangerous place I’ve ever worked. Iraq was dangerous for obvious reasons — things exploding around you. But Nigeria was dangerous in a different way. You never felt safe there.

AP: Can you explain?

EK: In June of 2006, I was detained for four days by the Nigerian military and held for no reason. It was worse than being pinned down by fire in Iraq. When you’re being shot at, you can tell yourself, well, I’ll either live or die. But being held by the military felt like everything had been taken away from me. I wasn’t told what was going on, or why I was being held.

EK: While I was being transferred from one location to another I was able to get a cell phone call out to my assistant back in Montclair, New Jersey. I said, “Listen very carefully, here’s where I am, call everybody.” My wife is a journalist and very resourceful, and together with the National Geographic Society she was able to put pressure on the right people, and within 24 hours the BBC and Reuters were carrying stories about an American journalist being held by the Nigerian military. The American embassy also applied pressure, and I was released. Afterward, I kept thinking, I am so lucky. What if I weren’t working with a big organization like Geographic? What if I weren’t an American?

AP: What were you shooting with?

EK: Everything was shot digitally, with Canon DSLRs — the EOS 5D and the EOS Mark II. The photography is meant to be striking, but overall what I wanted to produce wasn’t an art piece but a documentary piece. I think you can look at the images and appreciate them as pure photography, but the real goal was to wake people up about this issue.

AP: That is the goal of advocacy journalism?

EK: Exactly. It’s about driving the issue forward. And what I learned doing my project about aging is that to really drive issues forward you have to get your work seen by as many people as possible. So we have taken a multi-media approach, with a traveling exhibition, a website, a one-hour television documentary, and of course a book. I think the book is still a very important part of this, even though it may be seen by only a relatively few people, compared to television or the interest. Without the book, none of the other stuff happens. It serves as a fulcrum. If a photographer does a great body of work and creates all these multi-media outlets for people to see it, if there isn’t a book involved you feel that there is something missing. A book has a certain thing-ness, it’s a tangible quality we still need.