Without Internet access or even running water, the students were taught the basics of photography and created images sold at a fundraiser in Chicago. 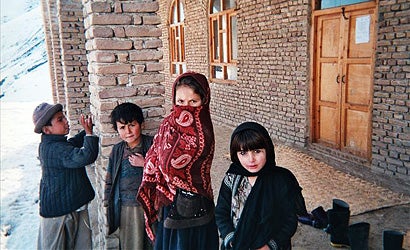 A group of young students in the rural mountain village of Eal Keshan, Afghanistan were given the opportunity to share a glimpse of their lives with strangers worlds away.

Concern Worldwide, a non-profit humanitarian organization focused on improving the quality of life in third world countries, provided the donated disposable cameras that enabled the students to use photography as a tool to communicate aspects of their lives to philanthropists in America.

Images captured by the students were brought back to Chicago, where they were sold at Concerned Worldwide’s Brigid Awards Luncheon in February. The event raised over $100,000 for education in Afghanistan. The organization will use some of the funds to build an eight-room school, which will provide primary education to 800 students in Eal Keshan.

Laborers will use materials available locally, including stones, sand and gravel, to help build the school. During the construction process, 10 educators will attend the government’s Teachers Training Institute, which will prepare them to teach reading and writing skills.

Justin Schair, press officer for Concern Worldwide in the U.S., says the organization has been working in Afghanistan since 1998. They have been responsible for the construction of several new schools in Afghanistan, including some in Takhar Province and other areas.

Students learned only the basics of photography in order to capture images with their disposable cameras, but were able to see prints of their images after the film was developed in the United States. With the community lacking running water let alone any familiarity with technology, Schair says photography will not be part of the curriculum.

Based in Dublin, Ireland, Concerned Worldwide has over 3,500 personnel working to improve the lives of the five million people they reach in developing nations each year. For more information or to make a contribution, visit their U.S. web site.