A Conversation with Taryn Simon 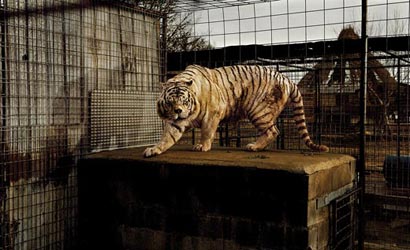 Photographer Taryn Simon admits that the similarities between her two most recent art projects are not readily apparent. But they certainly do exist. Each, in its own way, is a story about America.

Simon’s breakthrough 2003 book The Innocents was a collection of portraits of former prison convicts who had been exonerated through DNA testing. The elaborately lit and staged portraits (in some cases, the former prisoners posed with the very people they had been accused of victimizing) were filled with blank and bitter gazes. In accompanying interviews, the former prisoners often questioned notions of justice and the merits of freedom.

In her latest book, titled An American Index of the Hidden and Unfamiliar (Steidl/D.A.P., $75), Simon turns her attention to particular American places and spaces — rooms and landscapes that “lie deep within the borders of the United States at the foundation of a national culture.” In one way or another these are all essential places: essential to the functioning of government and science, and essential to the way we think or ourselves as Americans. They also happen to be inaccessible or hidden from the general public. (There is also an exhibition of the work up at the Whitney Museum of American Art through June 24.)

Simon’s pictures document everything from a nuclear waste storage facility in Washington to a room at John F. Kennedy Airport in New York where seized contraband is kept. There is the Avian Quarantine Facility of the New York Animal Import Center in Newburgh, New York, and the Marijuana Research Grow Room at the National Center for Natural Products Research in Oxford, Mississippi; the Church of Scientology film screening room in Hollywood and a great white shark in a tank in an aquarium in Monterey, California.

“Shooting pictures without people in them was something I hadn’t done for awhile,” says Simon, who spent a little more than four years on the project. “When I was doing The Innocents I’d been concentrating on portraiture. So that’s one of the reasons I wanted to do this new project.”

But what links the two bodies of work? In each case Simon gazes at corners of America that normally remain out of view — spotlighting prisoners whose lives might have otherwise gone unnoticed, documenting rooms that are literally hidden from most of us. There is an underlying sense of haves and have-nots: those with the power of freedom to move about and witness, and those without that power. In both there is also the sense of exploration and cataloging, as if Simon were a naturalist examining and collecting the flora and fauna of an exotic, perplexing, and sometimes dangerous land.

Recently, Simon spoke with American Photo about her new project and discoveries she made on her journey through hidden America.

AP: How did the American Index idea come about?

TS: When I completed The Innocents I went back to my older work to find what I had done previously that I thought was successful or not. And the photograph that I kept coming back to was a shot I’d made of the Palace of the Revolution in Cuba.

AP: What brought you back to it?

TS: I was attracted to its geometry and formal lighting and the absence of a figure in the photograph. But what I also liked about the shot was that its impact was bound to the fact that it showed an inaccessible space. The combination of the aesthetics and the hidden dimension of the place is such an important part of photography.

AP: There is something purely photographic about using the camera to show a place that is hidden from view…

TS: Yes, and then I wanted to find photographs that had that combination of qualities within America’s own borders — places that were unseen and could reveal something about the foundation of America and its mythology and how it works.

AP: How did you research and find these places?

TS: The Internet played a huge part in that process. I worked with three producers on the project. I began with a wish list of the places that I had imagined would be what I was looking for. Then through my research process I would arrive at places far different from what I imagined when I started. Some places came from our own original ideas. Sometimes we’d be looking for one place and that would lead us to another place.

AP: That sense of surprise is part of what is interesting. The viewer can’t imagine where you’ll take them next.

TS: A large part of this project is its entropy — its disorder in the way it jumps from one subject to another, from entertainment to security to religion to nature. There were certain categories within those themes that I wanted to fill. I worked in such a calculated way. For instance, I knew I wanted to photograph in an avian quarantine facility. I had no idea what an avian quarantine facility looks like, nor do most people. But I knew I wanted to address the subject of avian influenza in some way, because I think Americans somehow expect there to be some place that is protecting them from this kind of epidemic. Then I had to find an avian quarantine facility, and then I had to arrive at this place and had to respond to it with a large-format camera and a lighting setup.

AP: The subjects you photographed are so different, and yet in the end you need to come away with images that hang together visually. How do you do that?

TS: As I said, I generally am extremely calculated. I like things to be very ironed out when I go into a photographic situation. But I also had to be somewhat spontaneous within that framework. That was a contradiction for me. The lighting setups changed from subject to subject. But in general I wanted to create a kind of strange, eerie beauty in each setting. I shot with a large-format camera most of the time, though there are some cases when I was unable to use that. I shot a Native American sun dance in Texas and had to use a smaller camera that was more discreet because photography was not allowed there. For a shot of an exploding warhead I made at Elgin Air Force Base in Florida, I couldn’t use a photographic camera, so I used an IMAX 70mm film camera and pulled a frame from that.

AP: How do you see this body of work fitting in with what you did in The Innocents?

TS: From a visual standpoint, the connection is how both projects set up a seductive stage to show subject matter that typically wouldn’t receive that sort of treatment. A huge part of what I do is to simply finding subjects that aren’t being given attention or thought and then applying this seductive aesthetic that draws in a larger audience.

AP: Did you do much post-production work on the images?

TS: The only thing I use Photoshop for is preparing files for my lab to make Lamda prints. I tweak the images so they’ll look right on the conventional paper that the printer uses.

AP: I want to ask about the book’s design. It was a perfect marriage of design and photography.

TS: I know. It was done by a designer named Joseph Logan. He has his own company and does a lot of art books. We both wanted to make the cover look like an old index — sort of like those 19th century books that documented plants and animals and exploration. This project does have that element of exploration in it.

AP: Can we come away from your pictures with any conclusions about America or our culture?

TS: To each his own, really. But certainly for me I would say the process of doing this work revealed something to me. I photographed a lot of government sites, and I was struck that so many of them looked like they hadn’t really evolved since the 1960s or the 1970s. They felt locked in time. That felt surprising to me. You just rely on these places to be modern or powerful in some way; you take for granted that you are being kept safe by the work done in them. To see the reality can be a little frightening, or dream crushing.