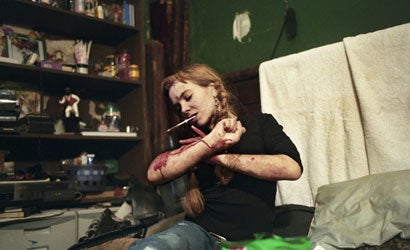 Sometimes being a good photographer is as simple as knowing when to say “yes.”

In October 2004 photojournalist Jessica Dimmock, who recently won the new 20,000 Euro “F Award” for her series on heroin addicts, was approached by a drug dealer while she was hanging around New York City’s Union Square with her digital SLR.

“He made it clear that he was a cocaine dealer and that if I wanted to follow him around and take pictures, I could,” Dimmock explains. “I said, yes.”

Dimmock brought the photos of that day to her professor at New York’s International Center of Photography, where she was studying documentary photography and photojournalism. He encouraged her to stick with the dealer, so she followed him around for the next three nights — looking in on chichi parties, escort services, and, finally, the ritzy, rent-controlled apartment turned heroine den that would become Dimmock’s surreal photo studio for the next year.

The images that garnered Dimmock her F Award, as well as and Inge Morath Prize and PDN’s Marty Forscher Fellowship Fund, are compassionate yet disturbing portraits of lives stifled and consumed by addiction.

Although Dimmock says she never would have expected to choose this as the topic of her first major photo project, looking back she can see that she was drawn to these people because her father struggled with drug addiction when she was young.

“Only after going back to this apartment did I realize there was something really familiar there,” she says of the lonely, isolated community. “I know as a kid I was in spaces kind of like that.”

The first few times Dimmock visited the apartment at 4 W. 22nd St. she didn’t bring her camera, but she did bring photos from her first night there with the dealer (who was arrested shortly afterward). Everyone loved them. They put them up on the walls and Dimmock just hung out for a while, watching movies and getting to know the people behind the addictions.

“It developed into this relationship where we became very comfortable with each other,” Dimmock says.

So comfortable was this relationship that Dimmock eventually was able to capture no-holds-barred photos of them shooting up, selling drugs, and having sex — which she continued to show her subjects to make sure they didn’t mind her publishing them.

“They liked it because they said ‘it’s kind of a bridge between what we do, which is so private, entering a more public sphere,'” Dimmock explains.

In September 2005, having only been published once before, in Fader magazine, Dimmock’s heroin den photos landed her a piece in New York magazine. Since then, the 28-year-old has joined Redux Pictures and has photographed on assignment for Newsweek, Time, Fortune, The New York Times Magazine, and its sports edition, Play.

As part of the F Award, Dimmock’s work will be turned into a book and will be shown at Forma international photography center in Milan in fall 2007. The F Award is a new prize from Fabrica Forma Fotographia, a cooperative effort of Forma and another Italian group, Fabrica, the Benetton Group’s creative laboratory.

Although the handsome award (about $25,300) did not stipulate that Dimmock use the money to finish this project specifically, she plans to continue photographing her subjects until spring. They were kicked out of the apartment last fall and since then she has continued to document their diverging paths.

Dimmock is also looking for ways to incorporate her subjects’ words into her upcoming book, and has found one rich source in a girl who filled two thick journals while she was at a rehabilitation center.

When interviewed for this article, Dimmock was waiting to meet with the girl, whom she had recently picked up from the center and taken to her mother’s house in Woodstock. Now she was back in the city with her “junkie boyfriend,” and the disappointment and worry was evident in Dimmock’s voice.

But to the ubiquitous photojournalist question — are you worried you are getting too involved with your subjects? — Dimmock has an equally unavoidable answer.

“My roommate is a social worker, and I know with social work it’s about not getting too close to your clients,” she says. “I don’t feel like the same rules apply to photography. For whatever reason, I signed on and I’m in it.”