Cole Named Photojournalist of the Year 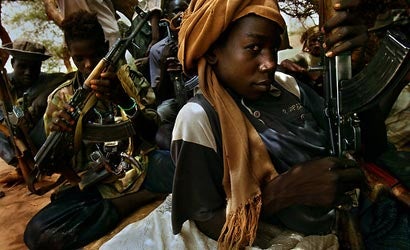 Carolyn Cole’s shelves are getting cluttered. With a Pulitzer Prize, a Robert Capa Gold Medal, more Pictures of the Year International awards than you can shake a stick at and three National Press Photographers Association Photojournalist of the Year awards, she has to be running out of room to store her awards.

Cole, a staff photographer for the Los Angeles Times , was named NPPA Photojournalist of the Year last week for the third time in the past five years. Her portfolio from this year includes striking photos of everything from the Israel-Hezbollah conflict to riots during the Haitian presidential election to New Orleans’s recovery from Hurricane Katrina to the genocide in Darfur.

Cole was born in Boulder, Colo., in 1961 and graduated from the University of Texas in 1983. She began her career as a staff photographer at the El Paso Herald Post in 1986; two years later she moved to San Francisco to take a position at the Examiner, where she stayed for another two years. In 1990, she moved to Mexico City and worked as a freelance photographer for the Los Angeles Times, the Detroit Free Press and Business Week before returning to the United States in 1992. After a stint at the Sacramento Bee, Cole joined the staff of the Los Angeles Times , where she remains today.

Her photographs of bank robber Emil Matasareanu, who was killed in a nationally televised shootout with police in North Hollywood, Calif., helped the Times win a Pulitzer for its coverage of the event and were used as evidence in a wrongful-death suit filed by Matasareanu’s family. The photographs from her two-month stay in Afghanistan in 2001 earned Cole her first NPPA Photojournalist of the Year award — and started her run though every major photojournalism award.

In 2002, Cole was in the West Bank to cover Israel’s incursion into Bethlehem. She holed up in the Church of the Nativity with a group of Palestinian militants and peace activists, enduring the infamous siege of the church. The photos she took from inside the church earned her a Pulitzer nomination in 2003. The following year she headed to Liberia to cover the country’s civil war and the rebel insurgency into the capital city of Monrovia. For her photos of the effects of civil war on the citizens of Liberia, Cole was awarded not only the Pulitzer Prize, but was also named the NPPA Photojournalist of the Year (for the second time) and the Pictures of the Year International Photographer of the Year — the first person to win all three major awards in the same year.