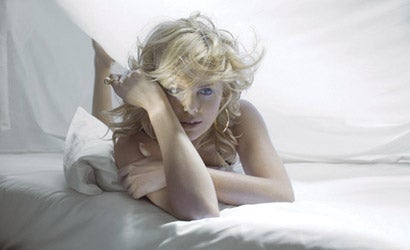 Despite the sudden rise and slow decline of skin-baring laddy mags in recent years, U.S. males still seem eager to contemplate the relative hotness of modern screen sirens. Yet in this marketplace crowded with Top This or Top That lists, Esquire’s annual Sexiest Woman Alive issue has remained at the top of the heap, aided by the magazine’s sass, wit, and top-notch art direction. The unveiling of Esquire’s favorite female is now a bona fide media event, speculated on in hundreds of online forums and teased in four preceding issues of the magazine with images that obscure the woman’s identity.

Los Angeles-based photographer Sheryl Nields, who has made a name for herself with her portraits of famously beautiful women, created the photos of Esquire’s 2007 Sexiest Woman Alive, Academy Award-winning actress Charlize Theron. Nields admits that it makes her job easier to work with someone like Theron, who is often compared to classic screen beauties like Grace Kelly. But the teaser photos that appeared in the lead-up issues presented a challenge: They had to be sexy without capturing the famous traits that make Theron recognizable.

Luckily Nields had plenty of experience to fall back on, including 12 years working in editorial and advertising with celebrities from the film and music scenes. She had also worked with Theron on an earlier assignment and photographed Esquire’s 2006 Sexiest Woman Alive, Scarlett Johansson. From this extensive portraiture work, Nields has come up with a few techniques to help her get the most out of her subjects. Her most important trait, she says, is her fun-loving attitude: She works hard to make the set an enjoyable place to be. So even though her high energy level sometimes “scares people,” she knows that “people who trust it learn that it also allows them to be free.”

“She has more energy than anyone I’ve ever met,” confirms Theron. “She’d hang from a chandelier if she thought it would make a good picture.”

Nields also prides herself on being “nimble,” which for her means being able to rework a shoot at a moment’s notice. Because she considers her portraits collaborations between herself and her subject, she is always willing to make last-minute changes. “I see what works with the sensibility of the artist I’m working with,” she explains. “I see where their lines are, and I like to respect those lines.”

For the Esquire shoot, the magazine’s art director discussed ideas with Theron in advance, then passed them on to Nields. In effect, she would be shooting a movie in stills: Theron would start on the bed (referencing another glamorous star of the screen, Marilyn Monroe) then move on to other sets, including a tiled shower and a wall of venetian blinds (for an image that would become the Esquire cover shot).

Nields shoots with a Mamiya 645 (with an 80mm lens) or a Mamiya RZ67 (with a 110mm) on color negative film. She also tends to use a mixture of HMI and strobe lights. Other than that, she keeps an open mind on set, leaving room to incorporate her subject’s opinions.

And Theron has plenty of opinions. “She’s such an amazing woman, so down to earth, and has such a good idea of what she likes and doesn’t,” Nields says of the actress. Working with Polaroids, Theron and Nields negotiated what poses worked best: Theron would say, “It’s a stronger image if you only see skin,” or would want to try it without jewelry or without shoes.

Which is not to say that Nields lacks her own opinions about how to create strong images. The initial idea for the venetian blinds was to have Theron peeking through them for one of the obscured pictures. But Nields “wasn’t loving it,” so she switched to the other side of the blinds, in a move she’s made so often that her assistants tease her about it.

“I did what I normally do, which is build a whole set and then shoot from the other angle,” she says with a laugh. “It always reveals some spontaneous thing.”

It seems to be that spontaneity, along with the trust Nields engenders, that keeps Hollywood’s biggest names, as well as big-name magazines like Esquire, coming back for more of her images.

“Working with Sheryl is as unique as it gets,” Theron says. “Her photos are interesting, complex, and beautiful at the same time; she has a special way of looking at things, and this comes across in her photographs.”