Custom-made for each project, his cameras become a part of the stories they tell. 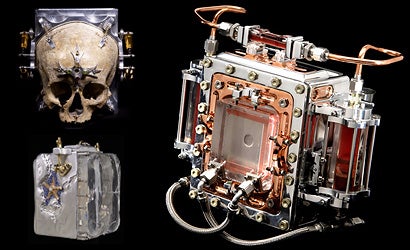 Strike up a conversation with Wayne Martin Belger and you’ll hear about the warm weather in Tucson and airport security woes, but browse through his studio or website and you’ll find everything from the heart of a baby to a 500-year-old Tibetan skull to a vial of HIV-positive blood. No, the man’s not a mad scientist; he’s an artist.

While some of his prints hang on gallery walls, Belger’s true masterpieces are the tools he uses to create his photographs. The Arizona based machinist’s operation is a one-man show. After conceptualizing a photographic series, he sets out to create a unique pinhole camera, gathering materials that range from the practical (aircraft grade aluminum) to the absurd (HIV-positive blood).

Perfecting a new camera can take anywhere from a few weeks to several months for Belger, who sometimes goes for days without sleep. Customers don’t take that hard work for granted, however, with some of his cameras selling for as much as $240,000. Once the camera meets his high standards, Belger begins his role as a photographer.

His subjects range from Californian body builders dealing with AIDS to mothers during childbirth. All images are captured through a pinhole, but a different camera is used for each series. Once complete, Belger heads to the darkroom, dodging and burning each print to perfection. He works independently from start to finish, never seeking help from an assistant, technician, or even a camera manufacturer.

Belger says he even makes his own frames. “Everything is done in-house,” he says proudly. “I don’t like anybody else messing with it so I kinda make everything. The only thing I don’t make is the film itself.”

The 44-year-old artist discovered photography just nine years ago, when automotive photographer and friend, Brian Booth, showed him a pinhole camera. A perfectionist, Belger decided to build a better camera for Booth. The Bee, as it came to be known, was a pinhole camera made from materials including aircraft grade aluminum and its namesake, the bumblebee. Booth continues to shoot with the camera today.

Most of Belger’s images follow a particular theme related to the camera created to capture them. Still a work in progress, his recent project documents mothers who are at least eight months pregnant. The 4×5 pinhole camera created for the project contains the heart of a child who died at birth. The heart, donated by a gallery owner who found it among a collection of old anatomy equipment, is preserved in a sealed compartment at the rear of the camera. Despite its chilling reminder of the risks of childbirth, Belger says he was surprised by how well the mothers took to the Heart camera.

Word about his project spread fast, with expecting mothers now contacting the photographer to set a date. So far Belger has photographed portraits of 30 women. He’s even been invited to photograph the women giving birth. Belger is able to capture only one frame, about a ten-minute exposure, and begins to expose the film just before his subject gives birth. Because of the project’s widespread popularity, he relies on air travel to reach some of his subjects, always carrying his cameras on the plane.

With the unusual appearance of his cameras and tight security at airports, Belger finds it necessary to take extra precautions when traveling, including arriving at the airport at least three hours before a domestic flight. Belger says a recent shipping mishap sent some of his cameras on an “unscheduled tour of Europe,” so shipping the cameras to his destination is out of the question.

He faces the most difficulty when traveling with his HIV camera, which contains sealed vials of blood donated by an HIV-positive friend. Belger uses the HIV camera to capture portraits of individuals suffering from the virus. The camera is subjected to additional scrutiny by airport security because of its unusual appearance. “The thing looks like a small nuclear device,” Belger says. “It’s really hard to explain.”

He plans to continue photographing his series with the HIV camera, and has already captured portraits of AIDS victims in San Francisco. Belger says that 13 of the 14 individuals he’s photographed for the project are very muscular, citing the steroids they use to treat AIDS as the cause. He plans to expand the project, hoping to travel to South Africa and Calcutta this fall, creating a geographic comparison of people with HIV and AIDS. “Where you live has so much to do with your survival,” he says.

Survival and death alike are recurring themes in his work. Belger says a future project may include portraits of Holocaust survivors. Employing this concept, his subjects would be photographed using a split cam that exposes the 4×5 film in two parts. A portrait of the survivors would appear on the top two-thirds of the film, while a close-up of their identification number tattoo would be displayed below. The pinhole camera used for this project would include a cross worn by Hitler’s wife, Eva Braun. The relic is already in Belger’s collection.

Belger says he’s very interested in studying genocide, and that the Holocaust project was partially inspired by war and wedding photographer Mark Brecke, who published photographs documenting genocide in Darfur and Sudan.

Belger places a strong emphasis on originality, and will even employ a particle accelerator for an upcoming project photographing icons of creation and destruction. Collaborating with a scientist, the photographer will use the Stanford Synchrotron in Palo Alto, CA to discharge a high intensity X-ray beam focused on the icon, which he’ll capture using a specially designed pinhole camera and 8×10 X-ray film.

Belger included prints with each of the six cameras he’s sold. His first camera, Bee, is currently in photographer Brian Booth’s collection. Third Eye and Yemaya were sold to fine art galleries, and Deer, Roadside Altar, and Sons of Abraham, his 9/11 camera, were sold to private collectors. Etherton Gallery in Tucson is currently listing the Yama installation for $240,000.

Yama is a 4×5 “stereo” camera contained in a 500-year-old Tibetan skull. The pinhole camera creates two side-by-side images captured through the skull’s eyes. Belger says that every metal part of the camera was assembled by hand. Embedded in the skull are precious stones, including a $5,000 ruby. The $240,000 asking price includes a gold Burmese temple case and an elaborate steel and wood table made with materials from India.

Belger has arrangements with each of the camera’s owners, allowing him to use the cameras whenever he chooses. In exchange, he provides the owners with prints of the new images he captures.

He will be reuniting with Yemaya, an underwater pinhole camera, at Birch Aquarium at the Scripps Institution of Oceanography in San Diego. Belger, a certified scuba diver, will shoot on July 12th and 13th at Scripps. His work will also be featured at an inaugural gallery showing in La Jolla the following weekend. The opening reception at Device Gallery will be held on Saturday evening, July 19th.

For more information about Belger’s cameras and to see examples of his work, please visit our image gallery. 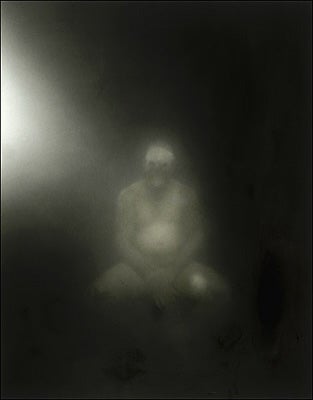 Untouchable (HIV) CameraThis 11×14 toned gelatin silver print was made in Belger’s darkroom and captured with the Untouchable camera. 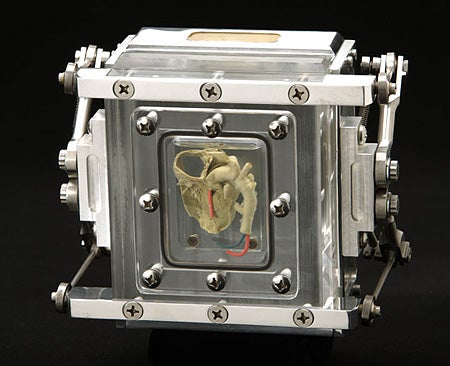 Heart CameraThe Heart pinhole camera is made of aluminum, titanium and acrylic. The camera features the heart of child who died at birth preserved in formaldehyde. The camera is used by Belger to capture portraits of expecting mothers. 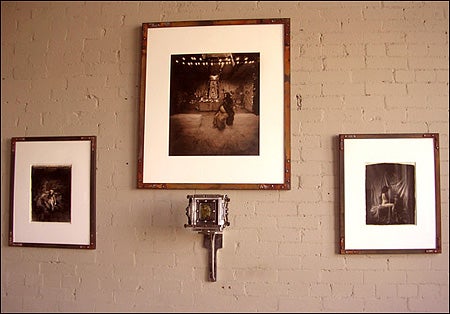 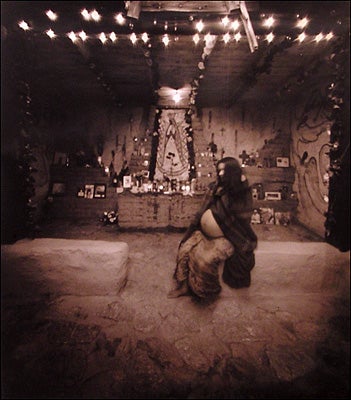 Heart CameraThis image was captured by Belger using the Heart camera. A print is included in the camera’s installation. 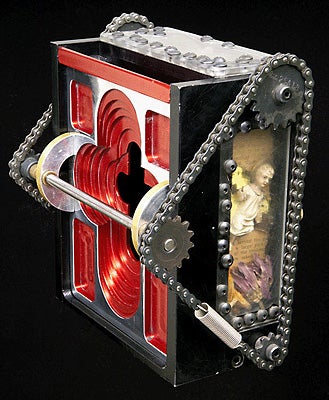 Dragonfly CameraThis camera was designed by Belger as an altar for a nine-year-old girl who passed away. Belger used the 20 lb. camera to photograph time segments of children in India. 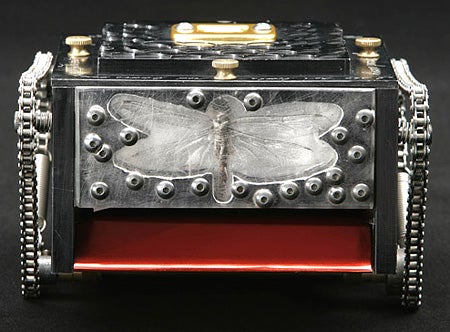 Dragonfly CameraA side view of the Dragonfly camera reveals an embedded dragonfly. 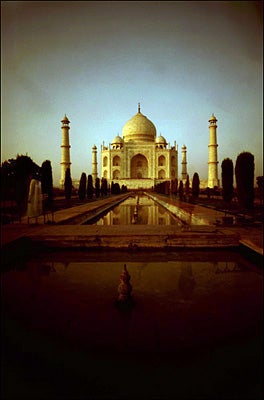 Dragonfly CameraThis image of the Taj Mahal was captured by Belger using the Dragonfly camera. 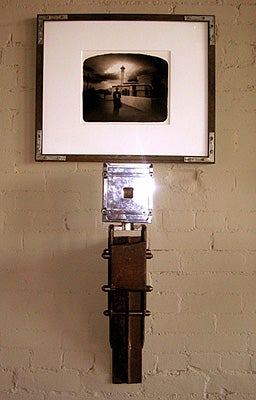 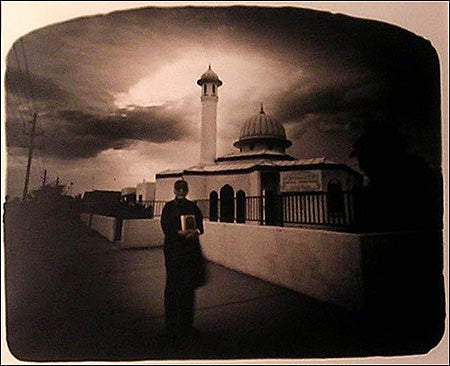 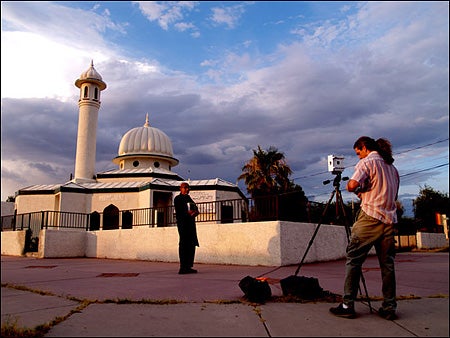 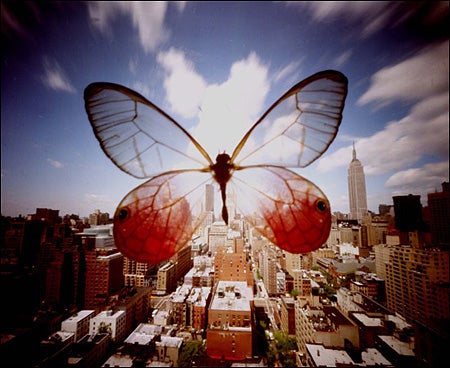 Wood CameraBelger placed a butterfly in front of the pinhole to capture this image of Manhattan. 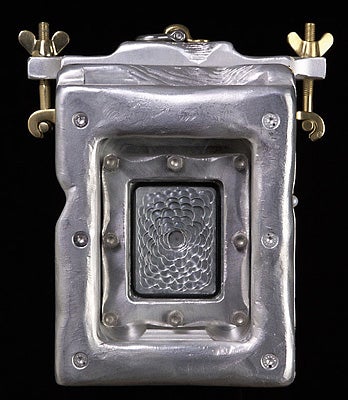 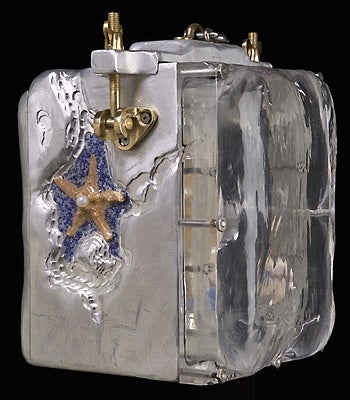 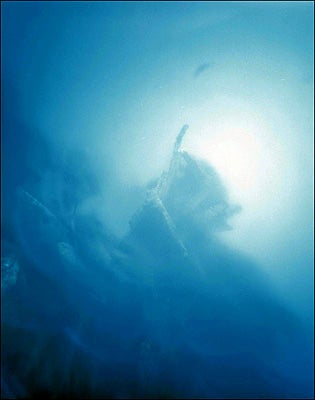 Yemaya (Underwater) CameraPhotographed off the coast of Catalina Island in California, this image was the first captured using Yemaya. The 90 minute exposure depicts a sunken ship at 105 feet below the surface. 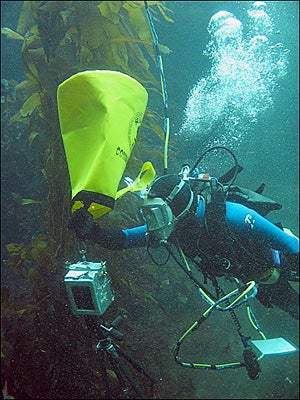 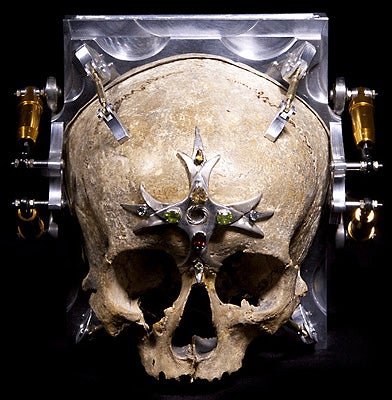 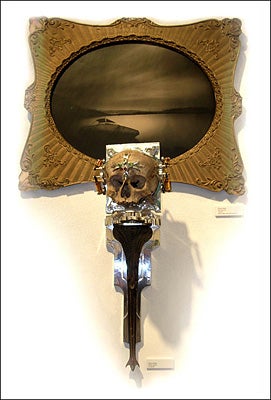 Third Eye CameraThe Third Eye camera installation includes a print of an image captured in San Francisco and presented in a frame designed by Belger. 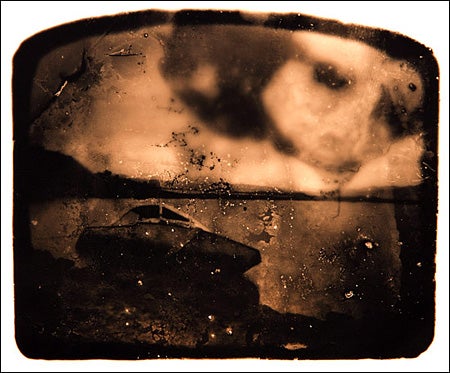 Third Eye CameraThis 11×14 gelatin silver print was made from a Polaroid negative captured with Third Eye in San Francisco. 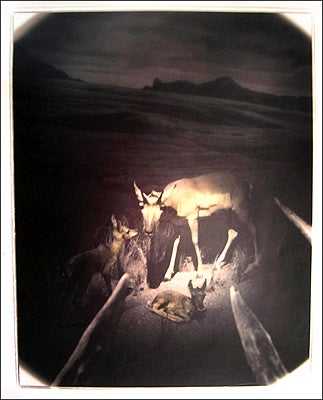 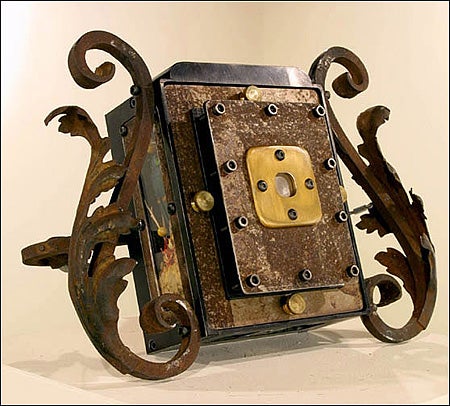 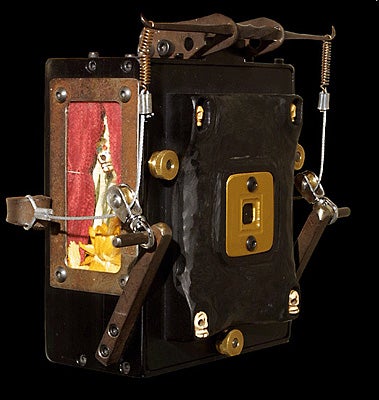 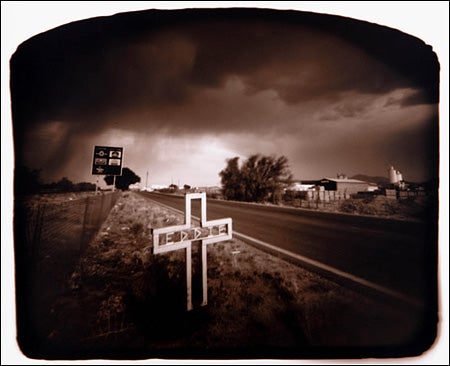 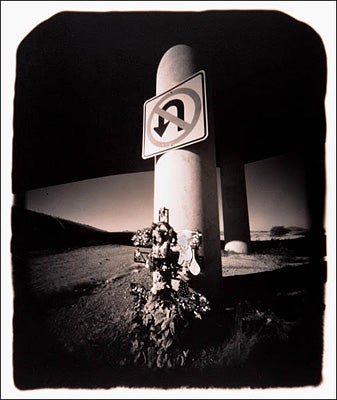 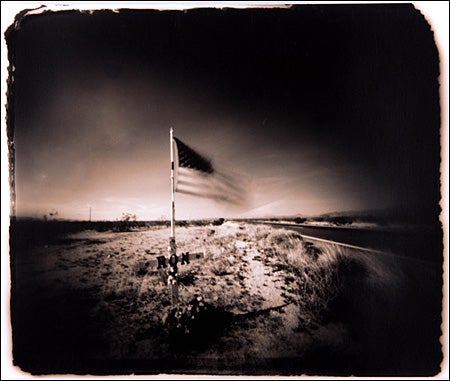 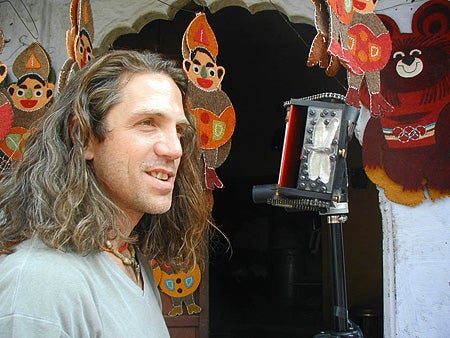