Behind the Lens with Preston Gannaway 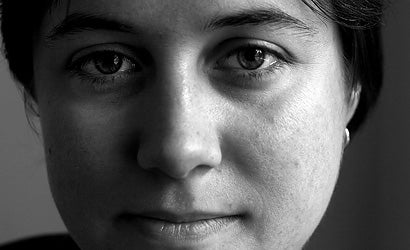 The photographic community is incredibly diverse, made up of photographers that shoot from the sky to the sea and everywhere in between. Each month we look at a different segment of the industry, interviewing top professional photographers about life, their careers, and what sets their piece of the photographic industry apart from the rest.

This month we focus on Preston Gannaway, a staff photographer at the Rocky Mountain News in Denver, Colorado. While driving from New Hampshire to Colorado earlier this month, Gannaway learned that she had been named the recipient of the 2008 Pulitzer Prize in Feature Photography. The 30-year-old photographer was recognized for her picture story, “Remember Me,” which she created while on staff at the Concord Monitor. In April’s installment of “Behind the Lens,” Gannaway talks about her career as a newspaper photographer, and the hard work and dedication that went into her Pulitzer-winning picture story.

Q. When did you begin your career as a newspaper photographer? Have you always worked for local publications?

I started professionally as a photographer right out of college at the Coalfield Progress in rural southwest Virginia. I had just graduated from Virginia Intermont College, where I studied fine art photography, when I was hired. I had no real experience with journalism, but I thought a newspaper job would be a good way to have a steady paycheck and still take pictures. The Coalfield Progress had a circulation of 8,000 and was published twice a week. A few years and internships later, I was hired at the Concord Monitor. I spent five years there. I loved the community photojournalism that has become what the Monitor is known for. I’ve always worked at small (until now) newspapers.

Q. You recently spent several months working on your project, “Remember Me.” Do you prefer working on long-term projects or daily assignments?

I spent almost two years on “Remember Me” — the longest I’ve spent on any project. I like doing both projects and daily assignments. That’s one of the reasons I love newspapers. But long-term projects are the most fulfilling for me. I enjoy the immediacy of daily work, but I also like delving into more complexities in a long-term story. For me, daily work is mostly about making good pictures, but long-term work is more about the story.

Q. When working on a long-term project, how do you judge which life events best tell the story? Do you spend all of your time with the subjects or anticipate situations and plan your time around them?

It’s usually determining which life events I can be there for and which ones I can anticipate ahead of time. During the editing process is when there’s more analyzing of the story and the themes we’re trying to illustrate.

As a newspaper photographer, I do what I can do to be there for situations, but it’s often in balance with other job responsibilities. At a small paper with a photo staff of five, you still have to put a paper out every day. My editor at the Concord Monitor, Dan Habib, was good about freeing me up when I needed to be. And the staff is always supportive when someone is working on a project.

Maintaining focus on a long-term project can be extremely challenging. It takes a lot of time just trying to stay up to date. The most frustrating thing in the world a photojournalist will hear is, “You should’ve been here yesterday…” But spending time on a project is also a balance with the subjects — it can be exhausting to have a photographer constantly around!

Q. How did you meet your subject for “Remember Me?” Was it difficult to get access? How did you make the St. Pierre family feel comfortable around you?

A friend of Rich and Carolynne’s contacted reporter Chelsea Conaboy about doing a story. From there, it really evolved. Originally, we planned to follow the family for only few months. Rich and Carolynne were very pleased with how the first story came out — and how we were able to capture what they were going through. That first story really built trust. At the same time, Chelsea Conaboy and I became more attached to the family and committed to the story. Some afternoons I would go by their house and just spend a few hours talking and visiting with Carolynne. Many times I would go and not even make a photo. Carolynne had reservations about the story at first, but she was so incredibly courageous and amazing about it.

Q. Did you become emotionally involved in the story? Is it possible to avoid after spending so much time with a subject? Was it difficult to continue after Carolynne’s death?

We couldn’t have done the story if we weren’t emotionally involved. Chelsea and I were always careful to be truthful in our coverage and not to interfere, but we never tried to be detached emotionally. It just wasn’t possible.

It was extremely difficult to continue after Carolynne’s death. We were dealing with our own grief. But we felt strongly that that we wanted to tell that part of the story as well — to share what a family goes through after the loss.

Often people don’t realize that that’s the darkest time for a family with someone so sick — when the house gets quiet and other friends and community members get back to their lives. After the loved one has passed, the needs are just as great. We wanted to show what that part of life was like for Rich and the kids.

Q. Working at a local newspaper, most of your readers live near one city, so neighborhood stories are obviously a priority. Do you cover events beyond where your readers reside? Have you spent time photographing in other countries?

At the Concord Monitor, I never photographed in another country. We would occasionally do stories outside our coverage area (of central New Hampshire), but only if it had a strong local angle. I love working domestically; there are so many fascinating things here and so many stories that need to be shared.

I think a lot of photography students feel pressure to shoot internationally – that that’s the way to become a photojournalist. I don’t think that’s true at all. The St. Pierre family lives two miles from the Concord Monitor office. So that’s, pretty literally, telling a story in your own backyard.

Q. As newspapers increase their Internet presence, there seems to be a greater focus on multimedia. Do you find yourself shooting video and capturing audio in addition to stills? How has this changed your workflow?

I’ve done some audio, but just for long-term projects. Most newspapers are in flux right now, the Rocky Mountain News is the same way. There’s a lot of emphasis on the web which changes the way you define the typical daily newspaper deadline. Now, photos are needed throughout the day for the website.

I think audio paired with still photographs can be incredibly powerful. And I really enjoyed creating the multimedia that went with the “Remember Me” story. It feels like such a more complete way of telling a story.

Q. What equipment do you use on a daily basis? Does the newspaper provide all of your equipment?

At the Rocky Mountain News where I am now, the paper provides all my equipment. Currently, I shoot with two Canon Mark II bodies. For documentary stories, like “Remember Me,” I don’t want to draw too much attention to myself so I usually stick with one body and a wide-angle zoom. I use my 16-35mm for 90% of my work, I would guess. I think your equipment needs to be good enough and reliable enough to not distract you from the job. But other than that, it’s just equipment.

Q. You’ve been recognized for your photography before, but the Pulitzer Prize is an award like no other. What did you do when you found out you had won? How has your life changed in the last few weeks?

My editor from the Monitor, Felice Belman, called me as I was driving out to Denver to start at the Rocky Mountain News. I had been on the road for four days, so it was surreal. I thought I must have heard her wrong.

I’m still having a hard time believing it! But the number of people who have seen the story is just incredible. We have received so many emails in support of the family [from readers] who have been moved by the story. It feels really wonderful and affirms the power of documentary work.

The “Remember Me” project has been, by far, the most significant work I’ve done as a journalist (and personally the most profound experience of my life). I put so much of myself into the project and I didn’t want to look back years later and think, ‘I wish I would have entered it in the Pulitzers.’ And I thought it would be really cool to be a finalist! It never occurred to me that I would win.

Q. What resources would you recommend for photographers interested in a job in the newspaper industry? Can you recommend any workshops or conferences? Are there any good resources on the Web?

There are tons of great resources for photographers! Aphotoaday.org is an excellent online community — especially for those starting out. The Missouri Photo Workshop is a great hands-on training ground for documentary storytelling. The National Press Photographers Association also provides great resources. The Atlanta Photojournalism Seminar has always been one of my favorite conferences. I could go on and on…