Behind the Lens with Martin Schoeller

The in-demand portrait photographer once waited tables, so there's hope for us all. 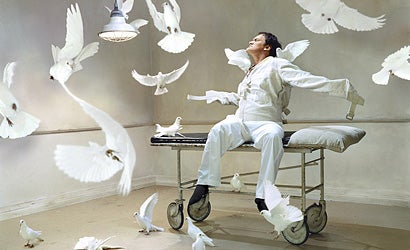 The photographic community is incredibly diverse, made up of photographers that shoot from the sky to the sea and everywhere in between. Each month we look at a different segment of the industry, interviewing top professional photographers about life, their careers, and what sets their piece of the photographic industry apart from the rest.

This month we focus on Martin Schoeller, a world-renowned portrait photographer based in New York City. Schoeller is best known for his “Close-Up” portrait series, for which he has photographed a slew of politicians, celebrities and everyday people over the last 10 years. As an editorial portrait photographer, Schoeller’s clients include the New Yorker, GQ, and Rolling Stone, among others. He also has several commercial clients including Goldman Sachs, Nike and Citibank. Schoeller, who began his photographic career as an assistant for Annie Leibovitz, provides an intimate look into his work.

Can you remember your first experience with photography? What aspect of photography pulled you in enough to consider it as a profession?

After graduating high school I was at a loss until a friend of mine got me interested in photography. We applied together at a technical school in Berlin. He helped me with my portfolio and explained the basics to me. He didn’t get into the school, but they took me. We are still friends; he is a very successful documentary filmmaker now.

Have you always been a photographer? What was your early career like?

No, not at all. I only got interested in photography while working on the portfolio that I needed to apply for this school. I always thought photographers are nerds and tech geeks, constantly talking about cameras and equipment. They just go to a party to take pictures, while not initiating anything.

After finishing school I assisted many different photographers in Germany, some more successful than others. Being an assistant is a lot of work and I decided it is time to work for somebody whose work I really respect. I had seen a big exhibition of portraits by Annie Leibovitz in Hamburg and was very impressed. I came to New York in 1992 and called up Irving Penn, Steven Meisel and Annie Leibovitz, trying to find work as an assistant. Nobody offered me anything; my broken English probably didn’t help. I went back to Germany, took more pictures and worked as a waiter. Half a year later I came back and ended up working with Annie Leibovitz for three years.

It was a great experience, I learned so much. It opened my eyes and took me to another level. Sometimes it wasn’t easy, she gave me a lot of responsibility, which at times was overwhelming. Photographing portraits on assignment comes with a lot of limitations and pressure. Watching her deal with all of the elements that have to come together — subjects, lighting, production, weather, styling, location — gave me an insight into what it takes to be a portrait photographer.

It’s clear that you’ve developed a unique style for capturing subjects in a natural state as seen in your book, “Close Up.” Who or what inspired you to photograph people in this way?

Bernd and Hilla Becher’s work inspired me to take a series of pictures, to build a platform that allows you to compare. Thomas Ruff’s images fascinated me when I saw them at a museum in Frankfurt. Richard Avedon’s images encouraged me to just photograph people the way I see them and not to worry if they will like their picture or not.

How do you get your subjects to open up to you? Do you spend time getting to know them well before a shoot or do you get right down to business?

Most of the time I have a very limited amount of time with my subjects. I do talk to them continuously while I take their picture and put on music that they might like. I always research my subjects, and watch their most obscure movies whenever applicable, if I think that might help me with ideas.

Where do you do the majority of your work? Do subjects often come to your studio or do you spend a lot of time on the road?

I prefer to photograph on location. The “Close Up” set up travels with me wherever I go. I don’t even have a studio.

What photographic equipment do you use on a daily basis? Do you shoot with digital medium format cameras or do you capture images exclusively on film?

I have never taken a digital picture, except for on vacation with a snapshot camera. I still prefer film and will continue to use it until the end. Film just looks so much better in galleries and museums. I use all different cameras. For my “Close Up” series I used a Mamiya RZ67 Pro II with a 140mm lens. A lot of magazine assignments I shoot with a Fuji 6×9 and for my latest project, “Female Bodybuilders,” I used my Sinar 8×10. Now that’s a camera. The quality is just amazing. The prints in the show will be 72″x89″ and the detail and colors are just beautiful and yet realistic. They’re not over saturated, too sharp and with too much depth of field, the way digital photographs sometimes look.

I exclusively use negative film, because it has the widest range of tonality. We scan them on a drum scanner and work on them in Photoshop. The scans for the “Female Bodybuilder” series were 1.86 gigabytes per image. I don’t think there will ever be a digital camera with that kind of resolution, since there is only a very small group of potential costumers in need of this kind of detail.

What difficulties do you run into on the job? Is there a lot involved in coordinating each shoot?

The preparation is often the most amount of work. To come up with an idea and to produce a shoot can be very involved and can take many days. The subject is most of the time the biggest unknown. Publicists are also a force to be reckoned with and can be quite challenging to say the least.

How many portraits have you shot over the years? Who was your favorite subject? What was that experience like?

I have probably photographed 1,000 people in my “Close Up” style so far. That’s about 100 a year for the last ten years. In the beginning I set up on the street and worked with whoever was willing to cooperate.

What projects are you currently working on? What do you have planned for the future?

A series on female bodybuilders. I have a show opening at Ace Gallery in L.A. on the 5th of March. They will also be shown in Beijing during the Olympics. This fall there will be a book published as well.

What books or Websites do you recommend for photographers interested in learning about portrait photography? Are there any Websites you keep up with on a regular basis?

No, not really. I get ideas from all different experiences. Just everyday events can have inspiring moments, such as riding the subway or going to a museum. I love to see people thinking outside the box of commercial photography that surrounds us everywhere.