Behind the Lens at the Beijing Olympics

Zach Honig presents a photographer's guide to the 2008 Beijing Olympics, including everything you need to know to cover the games or watch from home. 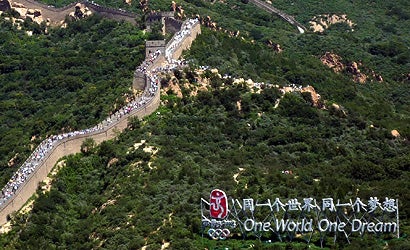 Today marks the end of the second week of my Beijing adventure, and it’s been quite the ride so far. I’ve experienced near collisions in taxicabs, great food, entire days of dense smog, fakes galore, and citywide anticipation for the Olympics — just over three weeks away. China has spent nearly the last decade preparing for these 16 days in the global spotlight, and excitement is certainly growing as the opening ceremony draws near.

Many say the Beijing Olympics will be the most spectacular to date, and officials are doing everything possible to make sure the party goes off without a hitch. The language barrier makes communicating very difficult for Westerners, but the government has recruited tens of thousands of English speaking volunteers to provide assistance to visitors and journalists covering the games. On a good day, I run into fewer than a dozen Beijingers who speak my native tongue, but volunteers dressed in blue collared shirts will help guide the way once visitors begin to arrive for the Games.

Western retailers have embraced the Olympics as an opportunity to enter the Chinese market — making American food and conveniences prevalent in Beijing. Officials have begun to deal with smog by reducing emissions, and Beijing’s infamous gridlocked traffic will hopefully be a thing of the past (and future, unfortunately) once Olympic lanes and even/odd license plate driving days go into effect early next week. Construction projects are winding down in what was once one of the fastest growing cities in the world. Visitors will enter a changed Beijing — if merely a city treated with an enormous band-aid — when they pass through Terminal 3 in the coming weeks.

There’s no question that residents are proud of what they’ve built, what they’ve accomplished — I’ve taken thousands of pictures since I’ve arrived and not once has someone ordered me to turn off my camera. The city and the country of China as a whole are ready to welcome you into their home.

I’ve created a blog documenting my daily experiences and providing information that I’ve only been able to gather from first hand experiences and talks with officials. Behind the Lens at the Beijing Olympics should be used to help guide your Beijing experience, and to provide information about the city not found anywhere else. Beijing has been extremely photog-friendly so far, and is without a doubt an amazing place to visit be that now or years after the 2008 Olympics have faded from memory.