Shooting with a 150-megapixel, medium-format camera 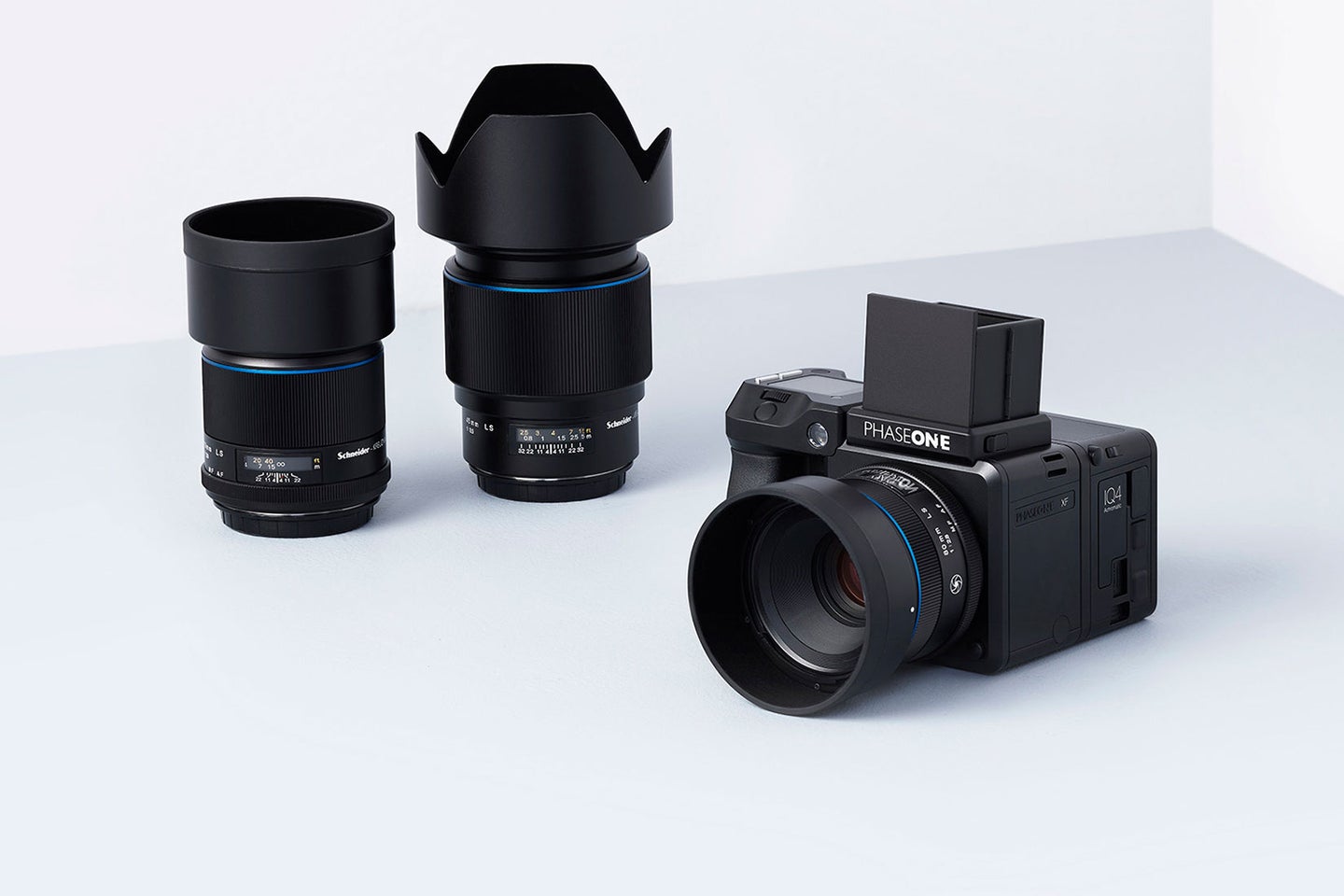 The Phase One IQ4 150MP expects you to know your way around. Phase One
SHARE

Taking a decent photo with a modern digital camera is relatively easy. The built-in light meters that determine exposure are smarter than they ever have been, and autofocus lenses snap into sharp focus quickly and silently. Smartphones are the pinnacle of this concept. The Google Pixel 3 with its Night Sight mode, for instance, can automatically create an image that would be genuinely challenging with a DSLR.

So, when I handed the $50,000+ PhaseOne IQ4 150MP medium-format camera to a friend and budding photo enthusiast during my testing, he was surprised by how many bad photos he took. He wondered why the lens made so much noise when it focused and where all the autofocus points were. He was curious why the images look a bit flat with no processing. They were all valid questions if you approach cameras within the frame of using consumer-grade, or even some professional, gear. But, the IQ4 is much more a tool than it is a “it just works” gadget. And by that I mean: you have to learn to use it.

What is a medium format digital camera anyway?

The term “medium format” simply refers to the size of the image sensor inside the camera. A sensor that’s the size of a single piece of 35mm film is considered “full-frame” and it’s what most high-end consumer and pro-grade DSLRs use. Medium format sensors, despite how it sounds, are actually larger than a full-frame sensor, which means there’s more room for larger or more numerous pixels.

A typical DSLR or mirrorless camera comes in two distinct pieces: a body and a lens. The body contains the sensor that actually captures the images, as well as the viewfinder so you can compose your shots, a screen for navigating menus and reviewing images, and the buttons you need to actually make the whole thing work.

High-end medium-format cameras work similarly, only the pieces are more modular. The sensor is larger than a single frame of 35mm film and lives inside of a digital “back,” which is a module that pops on and off of the body that holds everything together. So, when you want to upgrade, you can buy a new lens or a new back and they will typically work with the body you already have. It’s a system that has been in place since the film days. Photographers would attach a Polaroid film back to the camera to take a test shot and check framing and exposure. Then they could start shooting on rolls of negative or slide film.

In the film era, the larger negative meant a higher resolution image when you scanned or printed it. You could enlarge the photo more before you’d start to see the grain encroaching on fine details.

What’s the deal with the IQ4?

In 2014, medium format cameras started using a different type of imaging sensor. They switched from CCD sensors, to CMOS, which had become a lot more common. You could get higher-image quality out of the CCDs, but they had drawbacks. You couldn’t get a high-res live feed off of the sensor, for instance, so you couldn’t really compose a shot on the screen or on a remote monitor. CCDs also suffered from a lot of ugly digital noise when you amped up the ISO setting (the camera’s perceived sensitivity to light). The cameras were meant for the studio where they could sit on a tripod and crank out maximum detail under nice lighting conditions.

Once CMOS sensors came on the scene, however, the early models landed on a resolution of 50-megapixels. It was a lot for the time when the 36-megapixel Sony A7R seemed high-res and the 50-megapixel Canon 5DS was still a year away. Earlier this year, Fujifilm introduced its GFX 100 camera, which, as the name suggests, has a 100-megapixel resolution.

The IQ4 goes another 50 percent beyond that for a total of 150 megapixels, which means every image has a resolution somewhere in the 14,200 x 10,600 range. To put that in perspective, an 8K resolution screen—of which there are only a few commercially available at the moment—has a resolution of 7680 × 4320. Even an exported JPEG at that resolution—which is inherently compressed so web browsers and other programs can read it—will check in at more than 60 MB.

Move up to a pro-level DSLR like those from Canon and Nikon and you’re inundated with buttons. Once you know what they all do and spend hours learning the layout, they feel like second nature, but the physical interface is imposing. The IQ4 150, however, is the opposite. There are four generic, rectangular buttons flanking the screen. Two control wheels give you access to common functions like adjusting aperture and shutter speed. There’s a power button and, well, not much else.

The menus aren’t as complicated as a pro DSLR’s either. You don’t have to swipe through dozens of pages to find functions. There aren’t really any automated modes to give you training wheels for capturing images. It’s not confusing, but it expects you to know what you’re looking at. It’s a race car—it expects you to know how to drive it.

Once you’re shooting, the experience is similarly foreign if you’re used to cameras with a lot of whizzbang features. The camera focuses using the center of its frame—you can’t choose from a huge array of focusing points typical to consumer cams. You put your subject in the middle of the frame, press the shutter halfway to lock the focus, then move the frame around to get your exact crop. Interestingly, Phase One uses AI and internal motion sensors in the camera to make sure that you don’t move or tilt the camera enough to throw your subject out of focus. It automatically adjusts if you’re in autofocus mode, which is a nice touch.

The camera is loud. The lens’s motor is audible when it moves and if you’re using the optical viewfinder, there’s a very satisfying ka-chonk sound from the mirror in the body moving up and down. If you want to shoot silently, you can lock up the mirror, use the live feed from the screen to compose your shot and focus manually, though, that’s not easy to do on the move.

For what it’s worth, it feels like shooting with a pro-grade film camera. It doesn’t hinder your shooting, but it also doesn’t hold your hand along the way.

There are also specific features built-in that really only apply to high-end pro shooters. For instance, it can sense even slight shakes from something like a subway passing nearby. Even if it’s on a tripod, that little bit of shaking can cause a slightly blurry image. The camera can delay the shot until after the shaking stops. While you and I likely don’t need that for everyday photo taking, it can be a big issue for still-life photographers who want every last bit of detail they can squeeze out of a picture.

What about the image quality?

The files that come out of the IQ4 150 are marvelous in the literal sense of the word. The Schneider Kreuznach lenses resolve absurd levels of detail and, when I first zoomed into 100 percent view on a studio portrait, I laughed out loud at how close I could get to my subject’s eyes. It’s beyond counting eyelashes and into “ew gross, is that what tear ducts look like?” territory.

When my enthusiast friend looked at some of the images he had taken, he was disappointed. He was trying to shoot a photo of an always-moving bee on some flowers. A lot of them were blurry. Seeing those full-resolution images fully render blurry is particularly frustrating. With a camera this expensive and advanced, how could anyone take a bad photo?

Ultimately, this isn’t the kind of camera an enthusiast is going to go out and buy. In fact, even many pros will typically rent it for when they need a ton of resolution that will let them make super-huge prints meant for up-close viewing or just giving themselves a lot of room to crop without losing quality.

This is one of those instances in which a piece of gear really and truly is “pro” gear and it acts as such. While it’s more forgiving than older models when it comes to adjusting exposure after the fact, it wants you to tell it what to do and understand how it will react.