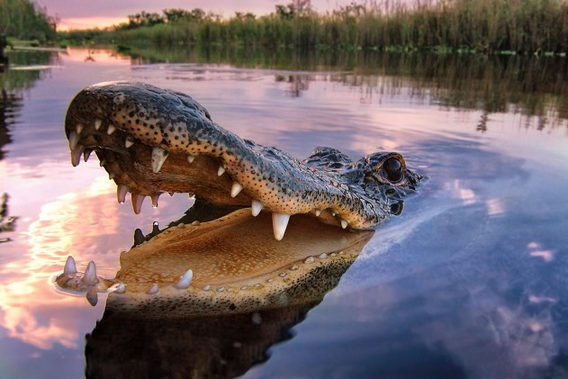 THE STORY: I had visited this same alligator on several occasions over a 6 month stretch and I found that I could get REALLY close to it. The closest that I have gotten the camera was a foot away but my head was not behind the viewfinder when I did this because I’m not quite that crazy! I layed down on a dock that was starting to fall apart so that it was even with the waterline when I was at the edge. I positioned the camera just above the water so that I got a waterbird’s perspective, pressed the shutter halfway and listened for the beep while pointing the lens towards the alligator’s eye, reframed using my best judgement (in regards to aiming the camera) and finished pressing the shutter. Lacking a right angle viewfinder adapter, I had to do this over and over again to make up for bad aim while not looking through the view finder. There was one funny moment when I made a sudden movement to get a picture of the gator in the perfect position that I had been waiting for. My sudden movement startled the alligator. This beast demonstrated it’s speed and power by suddenly whipping his tail so that it went into reverse away from me and down below the surface. The alligator’s quick and powerful movement in contrast to how still everything had been scared the hell out of me and caused me to jump backwards as well and scream like a little girl. I laughed afterward at how silly that scene would have looked to anybody who might have seen it, but I was all alone out there with my timid friend.