The husk was captured on a specialized macro lens. 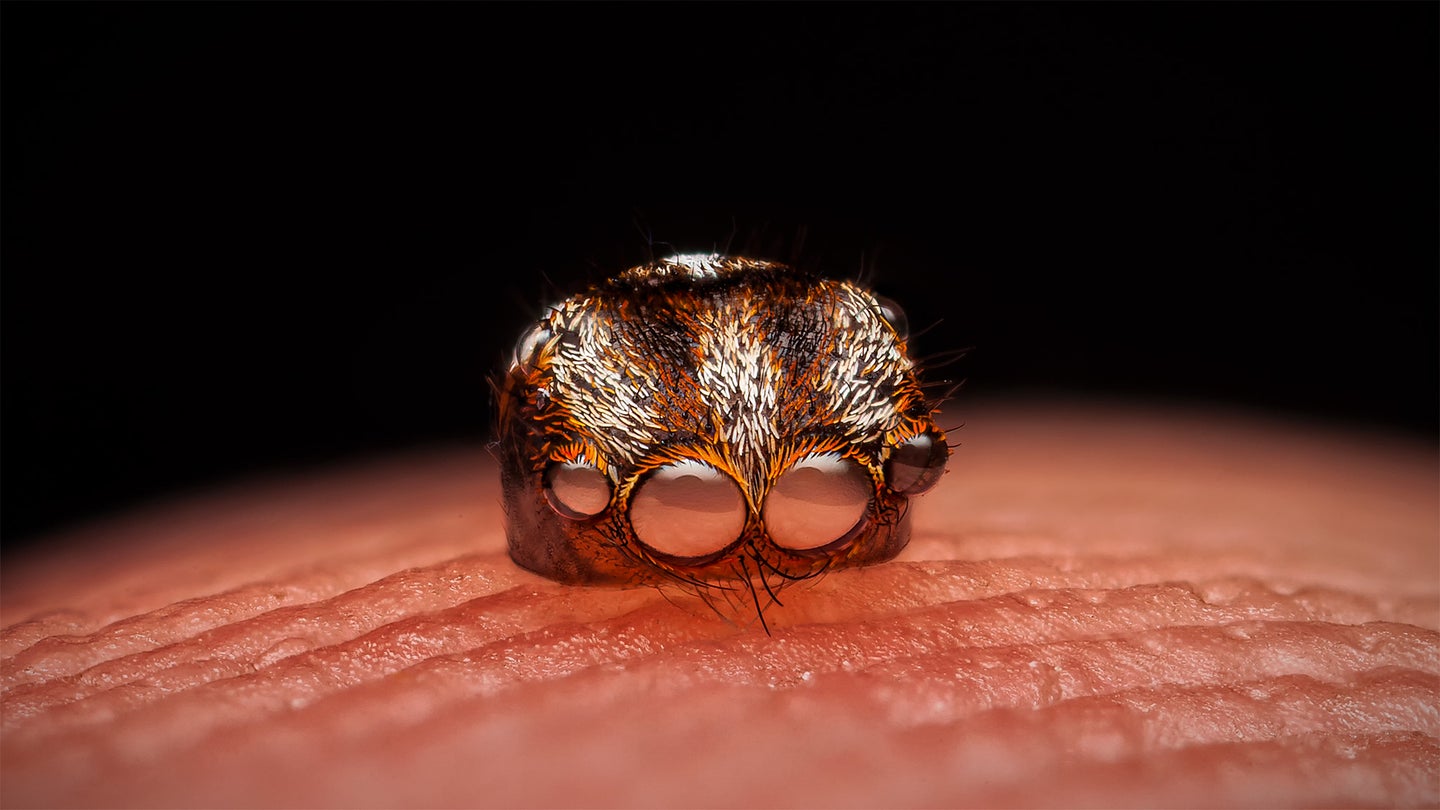 Mating can be a real battle in the animal world, but peacock spiders leave their helmets behind—literally. This arachnid exoskeleton came from an adult male Maratus velutinus that shed his skin one last time before mating. And that’s not fancy carpeting it’s sitting on, it’s Australian photographer Adam Fletcher’s fingertip. Talk about an itsy-bitsy spider.

Fletcher used a specialized 65mm macro lens, which can shoot minuscule objects with striking sharpness. He’s been an amateur photographer for over three decades, specializing in capturing spellbinding images of some of the tiniest and most intricate spiders on the planet.

“I love the fact that I can find small things anywhere and photograph them to show everyone the exquisite beauty of all the patterns, colors, and details,” Fletcher says. Peacock spiders are native mostly to Australia, and over different 70 species can be found all over the continent. Most measure only a couple millimeters across, but they have powerful adaptations worthy of their feathery name.

Peacock spiders are a type of jumping spider, which are known for their two big, bulgy (dare we say, cute?) front eyes, accompanied by six smaller peepers. While most other spiders have six or eight eyes of more modest stature and can’t produce much more than a blurry, black and white interpretation of their surroundings, jumping spiders have a complex retina and focusing system that helps them see in technicolor.

Because they can see so well, jumping spiders can spot prey many feet away and leap distances that measure over 20 times their body lengths to catch ants, wasps, and other small insects. They hunt so successfully this way that they don’t even bother building webs. But peacock spiders use their exceptional eyesight for an additional purpose: picking up the ladies.

Each species of male peacock spider sports a unique, colorful pattern that typically develops through several moltings. But the design reaches its peak vibrancy after the final molt of adulthood, a process that also unveils fully functional genitalia. Orange and white head stripes and a glossy jet black abdomen (velutinus means “velvety” in Latin) distinguish an eligible Maratus velutinus bachelor, and when confronted with an available female, he will display his opulence proudly—just like a peacock. If the female likes what she sees, they’ll mate.

Beauty is in the eye of the beholder—in this case, it never hurts to have a few extra eyes.