Riffing off vs. Ripping off – When does inspiration become plagiarism?

There's nothing wrong with being inspired by a great artist. But blatantly plagiarizing their work and entering it into an exhibition is definitely not cool. 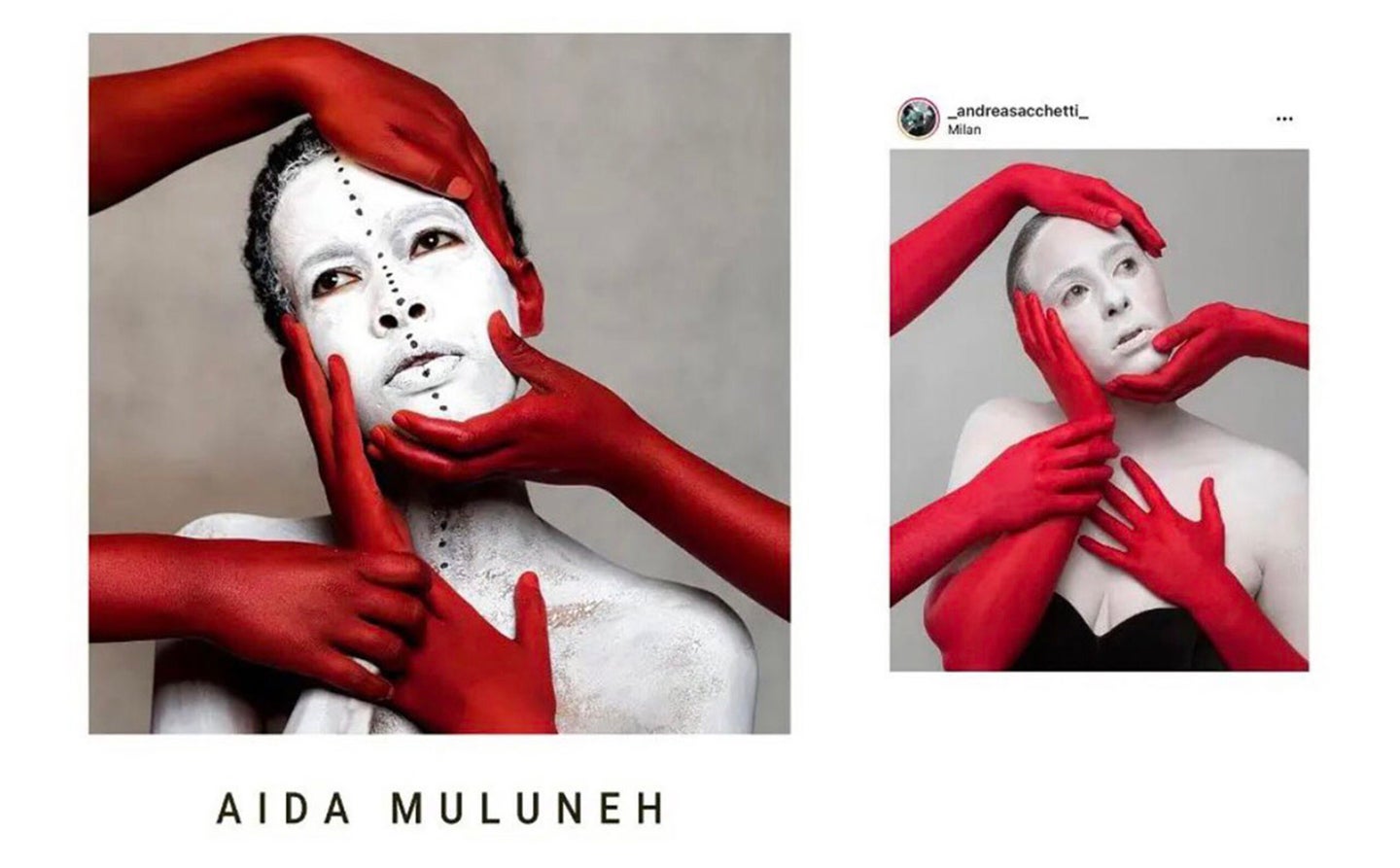 The image on the left is by acclaimed artist, Aïda Muluneh. The image on the right is by photography student Andrea Sacchetti, who has been accused of copying the former and showcasing it in a group exhibition.
SHARE

Andrea Sacchetti, an Italian photography student, is in trouble for blatantly plagiarizing Aïda Muluneh, an acclaimed Ethiopian artist and photographer, and exhibiting his knock-off at the 2021 Milan Photo Festival. What’s special about this instance is just how obvious the plagiarism is—as well as the venue in which it’s displayed.

It’s also a useful jumping-off point to talk about the difference between inspiration and plagiarism.

In 2014, Muluneh shot a series of images interpreting Dante’s Inferno for an exhibition at the Smithsonian National Museum of African Art. The 99 Series featured a model covered in white paint with red hands against a gray background. It’s an incredibly striking series.

Then earlier this month, the African Women in Photography Twitter account spotted Sacchetti’s “eerily similar” work in a group exhibition at the Milan Photo Festival. Understandably, they called it “another case of theft” and “unacceptable.”

The Istituto Italiano Fotografia assigned students to interpret Dante’s Inferno, and Sacchetti indisputably plagiarized Muluneh without attribution nor permission, producing a series of diptychs that used a model painted in white with red hands, photographed against a gray background.

The Milan Photo Festival, in a now-deleted Instagram statement, claimed: “there was no will to plagiarize against such a prestigious author and we know that the young photographer has already apologized.”

Which, to be honest, seems like a bit of a cop-out given the similarities between the images. Muluneh seemingly feels the same way, saying she takes “this quite personally” and that Sacchetti’s apology is “not the end of the conversation,” in a Twitter statement.

Copyright doesn’t come into this

Many people’s instant response in a situation like this is to mutter something about copyright. However, as I explain in another article, only individual artworks can be copyrighted, not concepts.

If Sacchetti printed a copy of Muluneh’s work and displayed it in Milan, that could potentially be a breach of copyright. But, because he recreated the work himself, he holds the copyright to the new work.

Could Muluneh sue him? Maybe, but the court case would be expensive, probably not get very far, and be run in Italian. This isn’t really a story of illegal behavior, but rather immoral behavior.

There is no hard and fast line between being inspired by something and plagiarizing it. It’s a scale with most instances falling somewhere in the middle.

In this situation, Sacchetti claims (through the Festival’s now-deleted Instagram statement) that there was “no will to plagiarize.” From that, I’m guessing we’re meant to assume he was merely inspired by Muluneh’s work.

And this is where things get iffy.

There are plenty of ways Sacchetti could have been inspired by Muluneh without plagiarizing her:

But that isn’t what happened. The photo in question is clearly a knockoff. It certainly seems too similar to not be deliberate, while falling short both technically and artistically.

Part of the problem here is that Muluneh’s work is so distinctive. This isn’t some overdone photographic motif—like a double exposure shot of a person and an outdoor scene or a selective-color photo of a rose—but a genuinely original and brilliant piece of art.

There are other situations where plagiarism is almost impossible.

Well-known tourist attractions like the Empire State Building have been shot from almost every imaginable angle. The odds are whatever your idea is, someone else has done it before. This doesn’t mean capturing your shot is plagiarizing theirs. Instead, you were likely both just inspired by the massive existing catalog of Empire State Building images.

Falling closer to the middle of the scale is a common situation for landscape photographers who often scope out what other photographers have captured at a location before visiting. If someone stands in the same place and takes a similar photo to one they saw online is it inspiration or plagiarism?

How many other people have taken that photo? Are they putting their own spin on things or trying to copy it as closely as possible? What is their intention in the moment?

It can be very hard to tell, which is why cases of plagiarism and image theft are so contentious. They’re almost never as clear-cut as this one.