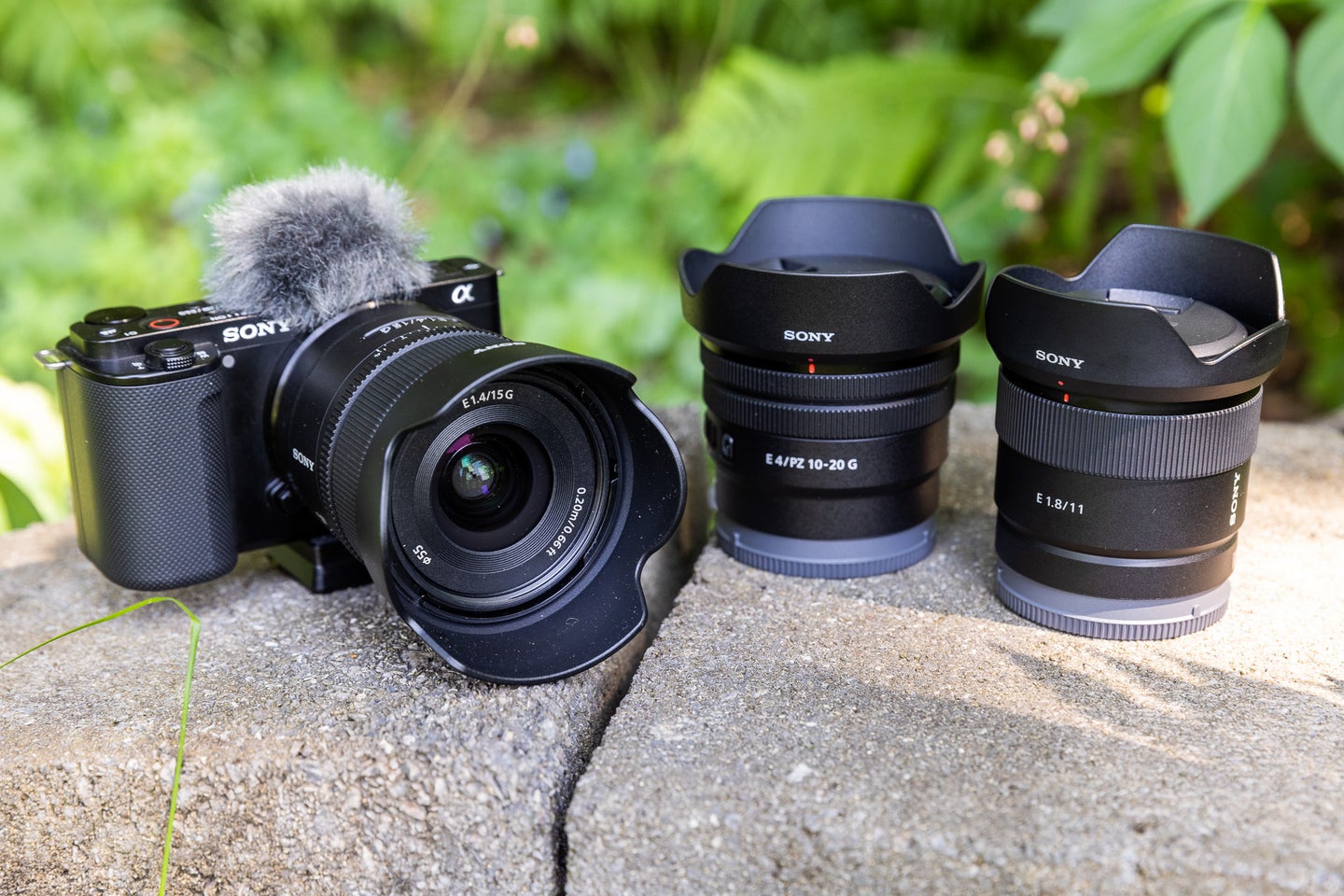 These tiny wide-angle lenses are much smaller than most of their competition. Stan Horaczek
SHARE

Sony has given its full-frame A7 series cameras and lenses lots of love lately, but now the company has introduced some new lenses intended for use with its APS-C bodies, like the ZV-E10 and the A6600. The announcement includes three new wide-angle lenses, all of which are built extremely small and light. The E 15mm f/1.4, E 11mm f/1.4 and E 10-20mm f/4 PZ take aim at hybrid shooters who capture both motion and stills with their mirrorless cameras.

Sony’s APS-C bodies have been popular with content creators for years and the company claims an increasing number of its users are shooting both stills and video. In fact, Sony claims that roughly 80 percent of the creators it surveyed utilize their camera’s photography and video modes.

I have had some early hands-on time with Sony’s new wide-angle glass. And while I haven’t quite shot enough to give a full review, I can give some early impressions—based on using them on a ZV-E10—mixed in with the specs and details below.

On a crop-sensor body, this 7.3-ounce lens offers roughly the same angle of view you’d expect out of a 23mm lens on a full-frame body. It has three aspherical elements inside, which help it keep sharp, bright corners. That can be a challenge with lenses this wide. It has a seven-blade aperture and solid dust and moisture resistance thanks to weather sealing inside the body.

Sony made these lenses for video shooters, so it has added a few features specifically useful when shooting motion. The company promises minimal focus breathing, a phenomenon in which the field of view changes as the lens focuses. It can be very distracting when shooting motion, and Sony seems to have tamed it in this lens.

The lens has a built-in aperture ring, a feature I personally love and would put on every lens ever if I was in charge. The ring clicks at each setting by default, but it can also work de-clicked.

A pair of linear motors inside help it focus quickly and silently. This drive system also allows for predictable and repeatable focus changes, which is particularly handy in video settings. There’s a button on the side of the lens to hold focus as well.

I haven’t done a thorough image quality test yet, but my first impressions are positive. The bokeh is pleasing, and the focusing really does feel smooth and quiet. There’s some distortion, but that’s a given with a lens this wide. The corners do appear relatively sharp and bright, however, especially at smaller apertures.

I really like the way this lens feels on the front of the ZV-E10. It’s extremely small and light, but doesn’t feel particularly cheap. It also focuses down to 6.7 inches, which comes in handy for close-up shooting.

If 15mm isn’t wide enough, you can go all the way to 11mm with Sony’s new ultra-wide prime. This 6.3-ounce lens is even smaller than its slightly longer sibling, though its maximum aperture is slightly smaller. It provides an equivalent field of view to a 16mm lens on a full-frame camera, which is extremely wide. Even holding it at the end of my arm to record some walk-and-talk video made me seem farther away than I’d want. Getting in close introduced too much perspective distortion.

Despite its super-wide field of view, the 11mm f/1.8 also has three aspherical elements inside to help with its corner sharpness and vignette avoidance. Like the 15mm, it also offers a seven-blade aperture, a pair of linear motors, dust and moisture resistance, as well as a focus hold button on the lens. Unlike the 15mm lens, it lacks an aperture ring of any kind.

The super-wide angle of view comes in handy for shooting in indoor spaces and capturing sweeping landscapes. Again, Sony has done a solid job combatting lens breathing and the lens focuses smoothly and silently.

While the corners seem relatively sharp, you will notice tangible distortion around the edges and vignetting—especially when shooting wide open.

The only zoom in Sony’s newly announced lens lineup offers the same angle of view as a 15-30mm lens on a full-frame camera. Even though it’s a zoom, it only weighs 6.2 ounces, which makes it the lightest of its new offerings. Sony calls this the “world’s smallest ultra-wide APS-C zoom,” and it’s hard to argue with that statement.

Like the rest of the lineup, the lens employs a pair of linear focus motors and offers up a focus hold button on the barrel. It has a constant maximum aperture at f/4, but it doesn’t come equipped with an aperture ring. A zoom ring on the lens can change the focal length, but cameras like the ZV-E10 can also control the zoom electronically.

Inside, you’ll find a pair of extra-low dispersion elements and a single extra-low dispersion aspherical element. With a lens this wide, we expect some distortion, especially at the wide end, and that’s the case here. At 20mm, it’s relatively manageable, but it gets fairly obvious at 10mm. It’s the nature of the thing.

While we’ve had some time to shoot with these lenses, we’re still working on our full reviews to go in-depth on image quality and overall performance. This small-and-light approach makes sense for Sony’s APS-C bodies as a differentiator from its full-frame A7-series cameras. On the ZV-E10 with each lens attached to a DJI RSC 2 gimbal, which is a heavy device on its own. Having lenses this small and light is a welcome change. Of the three, I personally find the fast 15mm the most practical in the bunch. Not only does it offer a manageable angle of view, but it has the fastest aperture and the built-in aperture ring, which I really like.

If you’re a hybrid shooter looking for a super compact kit, these will be worth at least considering when they start hitting shelves later this year.