The Solarcan Puck is a tiny, reusable pinhole camera designed to track the sun’s path

This affordable, little pinhole is capable of creating some seriously awesome results over the course of just a day or two. 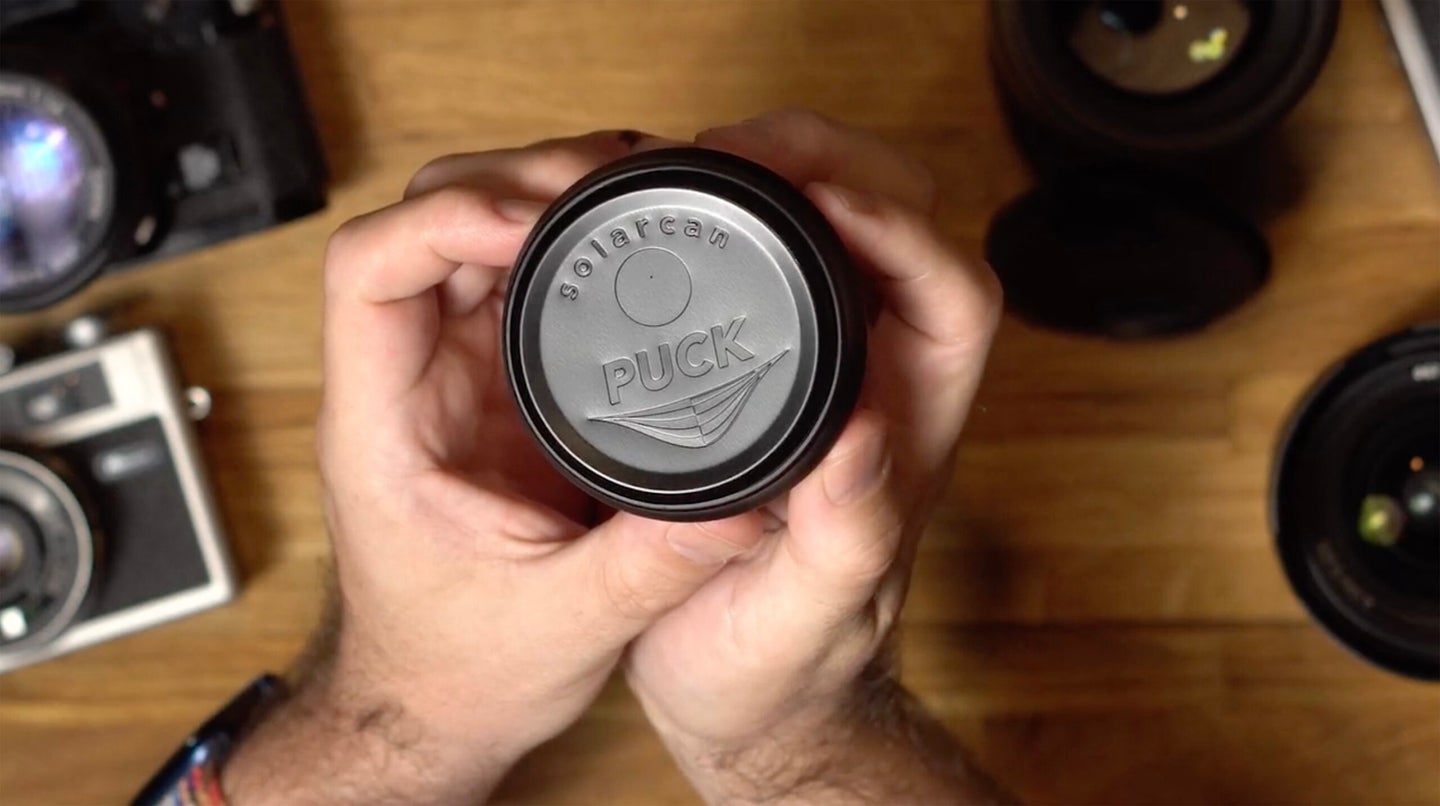 Back in early 2016, Scottish photographer Sam Cornwell first created the Solarcan, a pinhole camera in a beverage can that made light work of months-long exposures tracking the sun’s path. It proved hugely popular on Kickstarter, pulling in a whopping ten times its funding goal. He followed up last year with the tiny “Puck,” an even smaller pinhole camera that was originally included as a Black Friday freebie along with other purchases.

That freebie, it turns out, was more than it seemed and served double-duty as the beta test for the next Solarcan. Now, the final version has entered the crowdfunding phase and will soon start shipping as the Solarcan Puck.

Crowdfunded once more, but the track record bodes well

Like the original Solarcan, the Puck makes its debut via a Kickstarter campaign. Crowdfunded products can be a risk, but this one is hopefully somewhat less so for two reasons. Firstly, Cornwell already has a proven track record from the original Solarcan’s crowdfunding campaign, as well as two subsequent (and successful) campaigns for Solarcan variants and retail packaging. All of these earlier products were very quick to arrive, with shipping commencing just 2-4 months after funding kicked off.

The original Solarcan’s swift delivery was possible only because Cornwell decided to complete development and tool up for production before the Kickstarter campaign was even launched, and it sounds like that’s largely the case this time as well. Once again, the product design is already finalized and sufficient materials sourced to complete a production run of several thousand units. Delivery is currently expected to begin this June.

Like the Solarcan before it, the Solarcan Puck is both designed and manufactured in Hawick, Scotland. The original was housed in a ~15-ounce sealed beverage can, but the follow-up resides within a far smaller two-ounce aluminum can of the sort typically used for cosmetics. It’s also intended to produce a usable exposure within a single day, unlike the original which could take months for a single exposure.

Longer exposures may be possible depending upon ambient light levels, and indeed, Cornwell includes one on the Kickstarter campaign which he says was exposed for a few days. If you want a record of the sun’s trails over a longer period of weeks or months, you’ll obviously want to opt for the original version instead. If the look you’re after can be achieved with a shorter exposure, though, the Puck will get results in your hands far faster.

Unlike other analog mediums, no chemicals or processing is required to make a visible exposure with the Solarcan Puck. Simply load it up, mount it outdoors, wait a day (or several), and pop it open—your final image is ready to enjoy!

Small (but eye-catching) round prints

The original Solarcan used 5 x 7-inch Ilford Pearl photographic paper. Cornwell has yet to identify the specific paper used for the Solarcan Puck, nor the precise dimensions of either paper or camera.

What we do know, though, is that it’s been precut into the round shape of the tin itself. While the paper size is likely pretty tiny—we’re guessing in the region of 2 to 2.5 inches in diameter—the shape will certainly help each diminutive print to draw some attention.

You also get more sheets of paper with the final product than with last year’s freebie, which was given away with enough paper for just three exposures. Cornwell says that each Solarcan Puck will ship with nine sheets of precut paper, the first of which is preinstalled for you. Backers can also purchase additional exposures alongside their pledge, with a cost of £5 (~$6 USD) for packs of nine sheets, or £20 (~$25 USD) for 52 sheets.

If you plan on making many exposures, picking up the larger packs will likely save money in the long run, as Cornwell notes that while final retail pricing isn’t yet decided, “additional exposures that are available now are heavily discounted.”

Shipping this summer with plans for retail sale

Teachers will want to consider the Classroom Pack instead, which for £299 (~$376 USD) should receive 20 Pucks and a one-hour online video presentation at a cost of £14.95 (~$19 USD) per Puck. Finally, Cornwell says that a £399 (~$502 USD) pledge will get everything from the Classroom pack, plus a hoodie, five of the original Solarcans, and a “secret, surprise Puck box.”

As well as the Solarcan Puck, paper and instructions, each package will also include some 500mm cable ties and other accessories that can be used to mount the Puck in preparation for your photos.