The colossal banner is just a whisker under 7,000 square feet—the new sensor used to take it set to debut in smartphones next month. 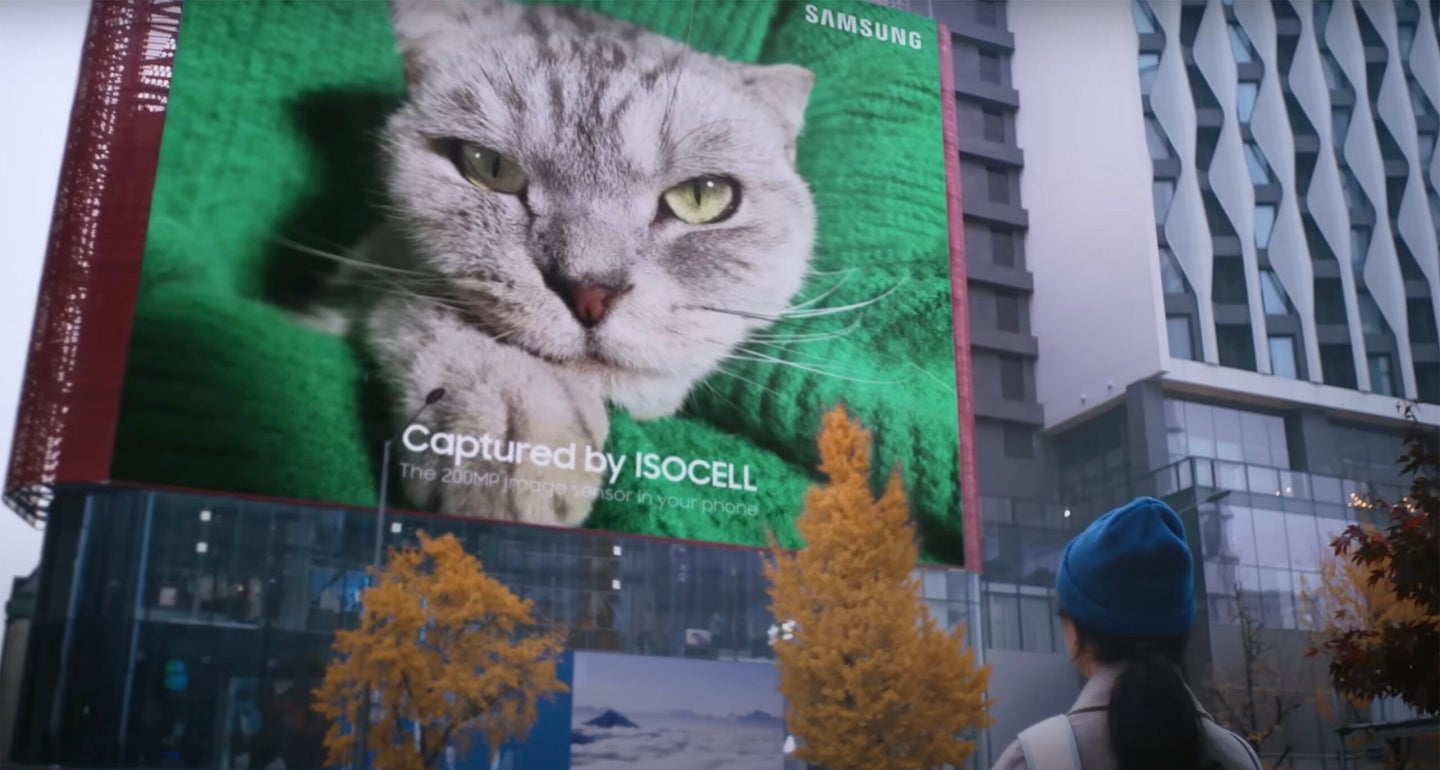 For the folks over at Samsung Semiconductor, the mighty megapixel reigns supreme. Not content to rest on the laurels of the 108-megapixel sensor it co-developed with Xiaomi back in 2019, the company launched the record-breaking 200-megapixel ISOCELL HP1 sensor late last year. In the process, it set a new benchmark for smartphone camera resolution.

As the ISOCELL HP1 sensor nears retail—the rumor mill currently has it landing next month in a new Motorola handset—its maker is looking for ways to emphasize the level of quality available from the chip. And as everyone knows, if you want the internet’s attention, it’s usually helpful to stick a cat in there somewhere. That’s precisely what Samsung’s marketing team has done, using an early copy of the new sensor to take an exceptionally high-res feline photo. They then turned it into an absolutely epic banner and wrapped it around a Korean high-rise building.

Capturing the shot and creating the print

Of course, since the ISOCELL HP1 hasn’t yet reached the market, Samsung couldn’t use it in an actual phone as none have been officially revealed. Hence, it used a camera module containing the new sensor mounted on a development board instead. Multiple engineers were needed to handle the framing, exposure, focus, and cat-wrangling.

Initially, the company says it used various SLR camera lenses in front of the sensor, and indeed the video shows an unidentified lens in use, although curiously it appears to be exposing the lens built into the camera module, rather than a naked sensor. Either way, the company says that the final image was taken without using an accessory lens.

Creating the banner was no less of an ordeal. With dimensions of approximately 92 feet wide by 72 feet tall, it is roughly the same length as a basketball court, and a fair bit wider to boot. (The total area works out to roughly 6,630 square feet.) Clearly, it couldn’t be printed in one go. Instead, Samsung printed off a dozen strips, each containing a 7.5-foot wide slice of the final image. These then had to be sewn together to create the end result, and a crane was needed to lift the completed banner into place before the big reveal.

Impressive resolution, but being forced to view from afar helps

There’s no denying that the amount of detail in the image is impressive, and it seems to hold up to examination even from a relatively close distance. With that said, Samsung is also taking advantage of the fact that it’s impossible to get truly up close to the print. With a sensor resolution of 16,384 by 12,288-pixels and assuming no cropping, the final output resolution would be roughly 14 to 15 pixels per inch, making each pixel large enough to be easily visible from very near.

Still, that would be true regardless of the capture device. A sensor resolution of 200 megapixels goes far beyond any DSLR or mirrorless camera, which would have required multiple shots to yield the same output resolution without additional interpolation. Of course, most of the time that much resolution is going to be overkill. There’s not much call for basketball court-sized prints from the general public, and so you may be wondering what the point of all this is.

You mostly won’t use the full 200-megapixel resolution directly

One of the key advantages of such a high-resolution sensor is the ability to use pixel binning to improve light-gathering capability. Pixel binning combines information from groups of adjacent pixels together so that they act as one much larger pixel. This in turn allows them to gather more light than they would otherwise be able to individually. More light = better image quality. This process has the benefit of reducing the resolution of the output image to a more manageable size.

The 200-megapixel resolution additionally allows for a higher-quality “zoom” to be achieved by cropping the image and then downsampling slightly less for the final shot. That zoom can operate entirely silently, making it great not just for stills but also video. The extra resolution also provides finer-grained data on which focus, exposure, and AI algorithms can potentially operate as needed.

Future product plans have yet to be revealed

So where can we expect to see this device show up first? Some sources predict that Lenovo-owned Motorola will likely be the first to employ the ISOCELL HP1, debuting it with the launch of the Motorola Frontier next month. It’s also pretty much a given that the chip will feature in one of Samsung’s phones, just as we saw for the previous-generation chip. Presuming those rumors aren’t too far off the mark, watch this space for more news in the not-too-distant future!