The Parker Solar Probe has gone where no probe has gone before—to the sun's outer layers—and even sent back pics to prove it. 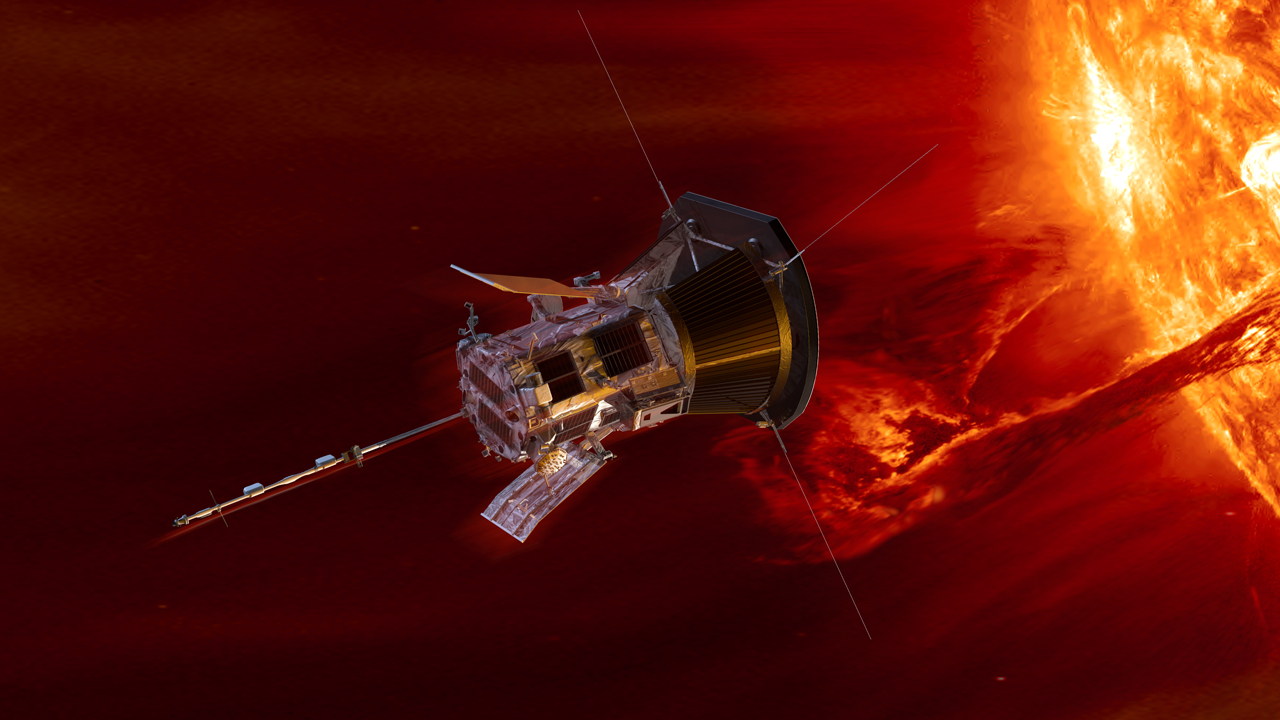 An illustration of the Parker Space Probe approaching the sun. NASA
SHARE

For the first time ever, a spacecraft has touched the outermost layers of the sun. NASA’s Parker Solar Probe recently flew through the sun’s upper atmosphere or corona—and brought its camera.

That’s right, we now have some pics from inside the sun, and they’re pretty sweet. You can see a time-lapse in the video below around the three-minute mark, but trust us, and just watch the whole thing.

Composition of the sun

The sun, unlike the Earth, doesn’t have a solid surface with a separate gas atmosphere. It’s a giant ball of plasma (the fourth state of matter) 865,000 miles across held together by its own gravity. This means that its surface roils and changes like the ocean, with chunks of it shooting up into its atmosphere all the time.

Most of the solar material that flies out from the surface remains bound by the sun’s gravity and magnetic field. This is what forms the corona. (It’s generally too faint to see from Earth, except during solar eclipses.)

Some of this material, though, breaks free from the pull of the sun and shoots out into the solar system as solar wind. When it hits the Earth’s atmosphere, we see it as the aurora borealis and aurora australis.

The boundary line between the sun’s atmosphere and the rest of the solar system is called the “Alfvén critical surface”. It’s the point where the sun’s magnetic field and gravity are no longer strong enough to bind the solar material. Until now, scientists have only been able to estimate that it was somewhere between 10 and 20 solar radii (4.3 to 8.6 million miles) from the surface of the sun.

But, for the first time in history, a spacecraft has now crossed the Alfvén critical surface and entered the sun’s atmosphere.

Photos from inside the sun

The Parker Solar Probe launched in 2018 and has spent the last three years circling closer and closer to the sun. And on April 28th this year, on its eighth fly-by, it finally reached it.

At 18.8 solar radii (roughly 8.1 million miles) from the surface of the sun, the Parker Solar Probe’s sensors detected the “specific magnetic and particle conditions” that suggested it had crossed the Alfvén critical surface.

During the flyby, the Parker Solar Probe passed through the corona several times confirming that the corona isn’t a smooth ball but, rather, is “wrinkly” with spikes and valleys.

The Parker Solar Probe also captured some stunning photos during the flyby, which only lasted a few hours. These show “coronal streamers” up close—a feature of the sun that are only visible from the Earth during total eclipses.

Even more impressively, you can also see the Milky Way and a few of the planets in the solar system.

The Parker Solar Probe’s mission is important for a couple of big reasons. Solar wind affects life here on Earth and, in particular, can interfere with technology like satellites. This means solar storms can disrupt GPS and communication satellites, which is a pretty big deal. The more we understand what’s happening in the Sun’s atmosphere, the more we can do about it.

Also, on a more philosophical level, the sun is the only star we can study up close. And it’s the only star we know of that supports life. Investigating it will also help the search for extraterrestrial life around the galaxy.

What’s next for the Parker Solar Probe

The Parker Solar Probe is continuing to orbit the sun, gradually making closer and closer passes. Its next pass will be in January, while its closest final approach isn’t until 2025 when it will pass within 3.83 million miles of the sun’s surface.