Kim Kardashian posed next to the glistening coffin at the 2018 Met Gala. The image went viral and then things got really interesting. 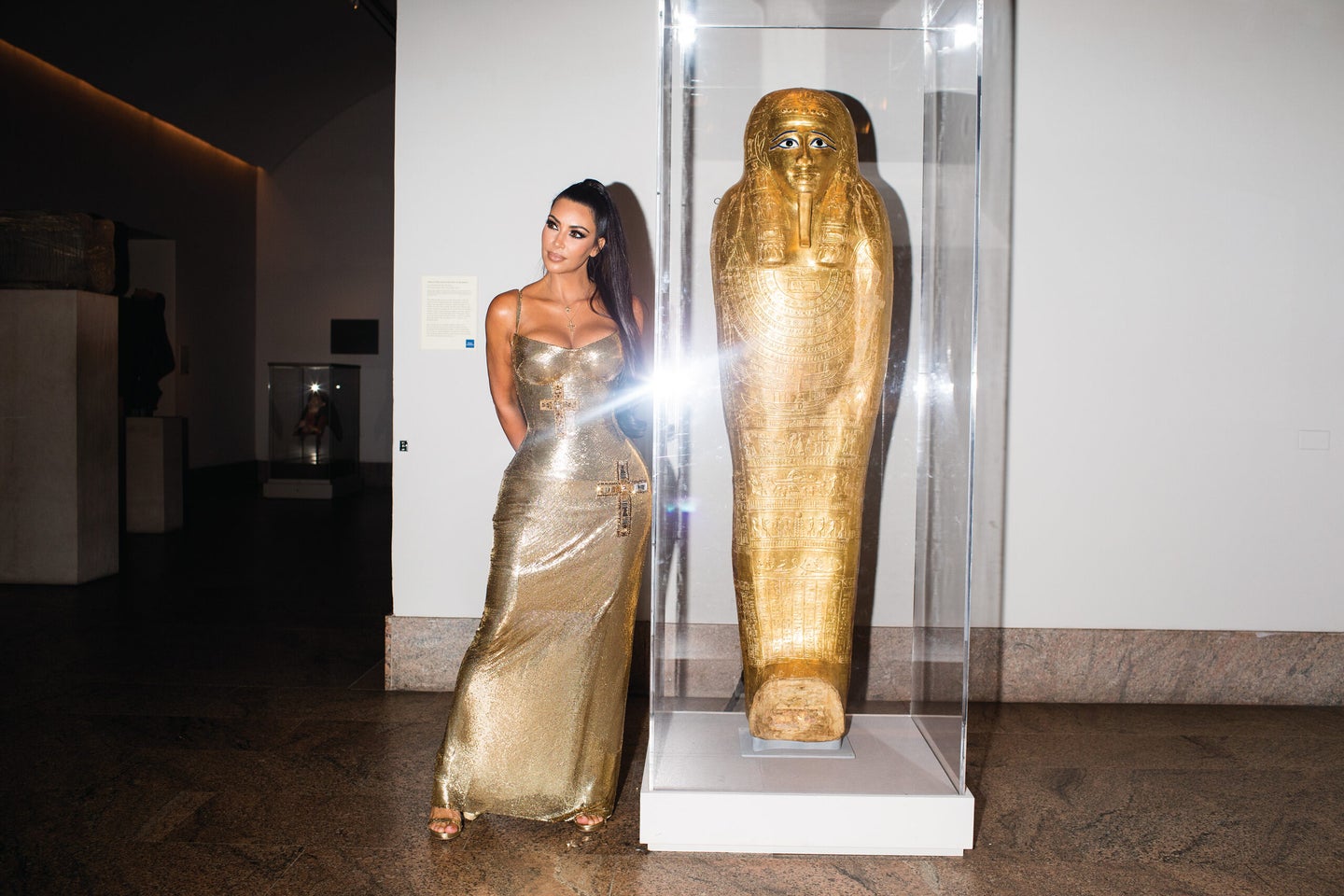 Kim Kardashian West has a superpower: She’s so famous that she can solve crimes just by posing next to a piece of evidence. No, seriously—that’s exactly what happened in a so-ridiculous-you-couldn’t-write-it art caper involving New York’s Metropolitan Museum, shady art dealers, a golden Egyptian coffin, and a photo of Kardashian West uncovered by historian Ben Lewis on his podcast, Art Bust.

At the 2018 Met Gala, Kardashian West wore a shiny gold dress. Also dolled up in gold was one of the museum’s highest-profile exhibits: Nedjemankh’s coffin from the 1st Century BC, which the Met had recently spent $4 million dollars acquiring. We’re not going to make the same cracks as every other outlet about matching gold outfits and mascara, but suffice it to say, the photo struck a chord with some people and went viral.

And that’s where things get weird.

Photographers (and writers) often have to deal with late payments and unpaid invoices, and apparently, so do looters.

The photo of Kardashian West and the coffin was seen around the world. In Egypt, one of the looters who dug it from the ground saw it and recognized the coffin. And, because he hadn’t been paid for the “assignment” he’d taken on in 2011 (seven years prior), he sent a tip-off to an informant “in the Middle East”.

A week or two after the Met Gala, the informant emailed the photo to Matthew Bogdanos, a Manhattan assistant district attorney who heads up the antiquities trafficking unit. It was the break he needed in a case he’d been working on for five years.

(Honestly, if I had the power to bring the DA down on the people who haven’t paid me, I’d take it!)

How the coffin got to The Met

The coffin took a convoluted route to the Met. For the full breakdown, check out Lewis’ podcast or his write up in The Times, but here’s the bulleted version:

While Bogdanos’ grand jury investigation is still ongoing, there have already been some consequences internationally.

French authorities have arrested and charged Kunicki and Semper. Dib was arrested by German authorities, though it’s unclear if he’s been charged. And the Met surrendered the coffin to the Manhattan DA who sent it back to Egypt, where it will be displayed in Cairo’s new Egyptian Museum.

While this might all seem like a fun caper, it does nicely highlight how sharing your photos online can have seriously unintended consequences. There are many areas around the world that are suffering from Instagram-inspired over-tourism, for similar reasons. If you take anything away from this article, remember that once an image is online, it’s kind of out of your hands—and there isn’t a huge amount you can do to protect it.

That, and don’t let Kim Kardashian West stand near any incriminating evidence.