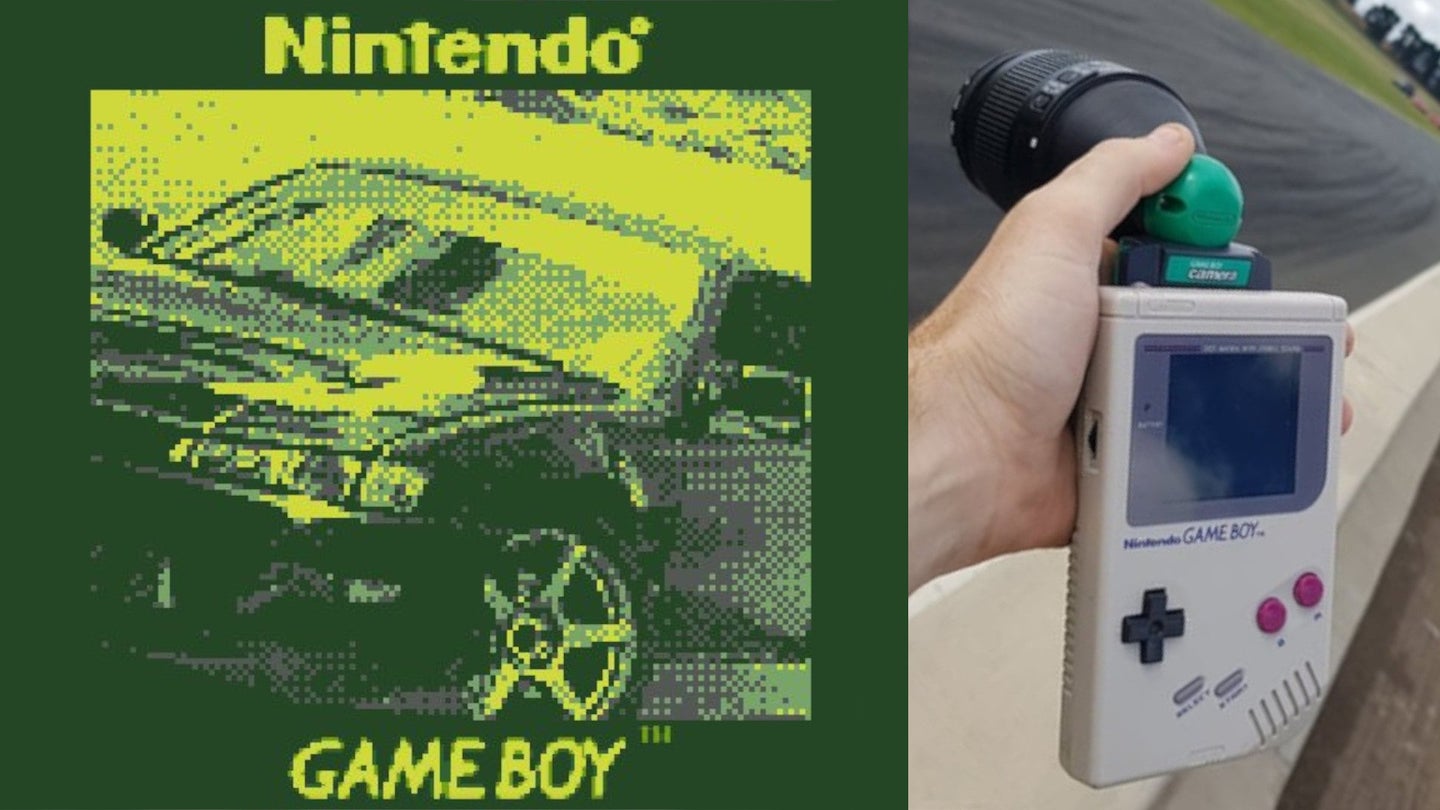 Conor Merrigan shot the image on the left with the Gameboy Camera and Canon lens rig on the right. Conor Merrigan
SHARE

The Game Boy Camera is one of the weirdest somewhat-successful consumer cameras ever made—and it has a serious cult following amongst photography enthusiasts these days. One fan, Conor Merrigan, has managed to adapt his into a surprisingly impressive motorsports shooting rig.

Here at PopPhoto, we have to admit we love the extreme retro vibes. And Conor’s photos look like how I remember the classic videogame, Gran Turismo, from my youth.

The Game Boy Camera has a swiveling lens built into a Game Boy Cartridge. Its 128×128-pixel CMOS sensor can capture 128×112-pixel images in four different shades of grey. That’s less than 0.01 megapixels—bad specs, even for 1998.

As well as being a terrible camera, the Game Boy Camera also has lots of other limitations. Two of the biggest, at least for shooting motorsports, are:

These, though, can be overcome.

To get his Game Boy Camera ready to shoot some motorsports action, Merrigan needed to find a way to get the photos off the cartridge and to attach a lens with a bit more reach. He’s posted a YouTube video with a full breakdown of the process and the workarounds are pretty clever.

To get photos off the cartridge, Merrigan uses an Arduino and some open source code from GitHub to emulate a Game Boy Printer, so photos could be “printed” and saved as digital images. (If you can get your hands on one, the Analogue Pocket offers an even simpler, though less retro, solution.)

And to fix the lack of zoom, Merrigan 3D printed an EF-to-Game Boy Camera mount adaptor (you can get the file on Thingiverse). Installing it involves taking apart the original cartridge and replacing the lens set up, but it also means you can use pretty much any EF lens instead.

Merrigan’s YouTube video originally went viral in December, but he’s finally gotten around to taking his modified Game Boy Camera setup to the track for a proper shoot—and the results are exceptional.

Even in ridiculously low resolution, Merrigan has managed to capture the feel of the action at a track day. I was shocked at how well each car looked with the 2-bit colors; they really don’t blend into an indistinct blur. You can even see tire smoke and dust in some of the shots.

And while you don’t necessarily have to limit yourself to a heavily modified camera from 1998 to push yourself, we’re all for trying new things with our photography here. And hopefully, Merrigan’s work will inspire you too.