Love cinema? 'Exposing Muybridge' shines a light on the dramatic and unexpected story of its invention. 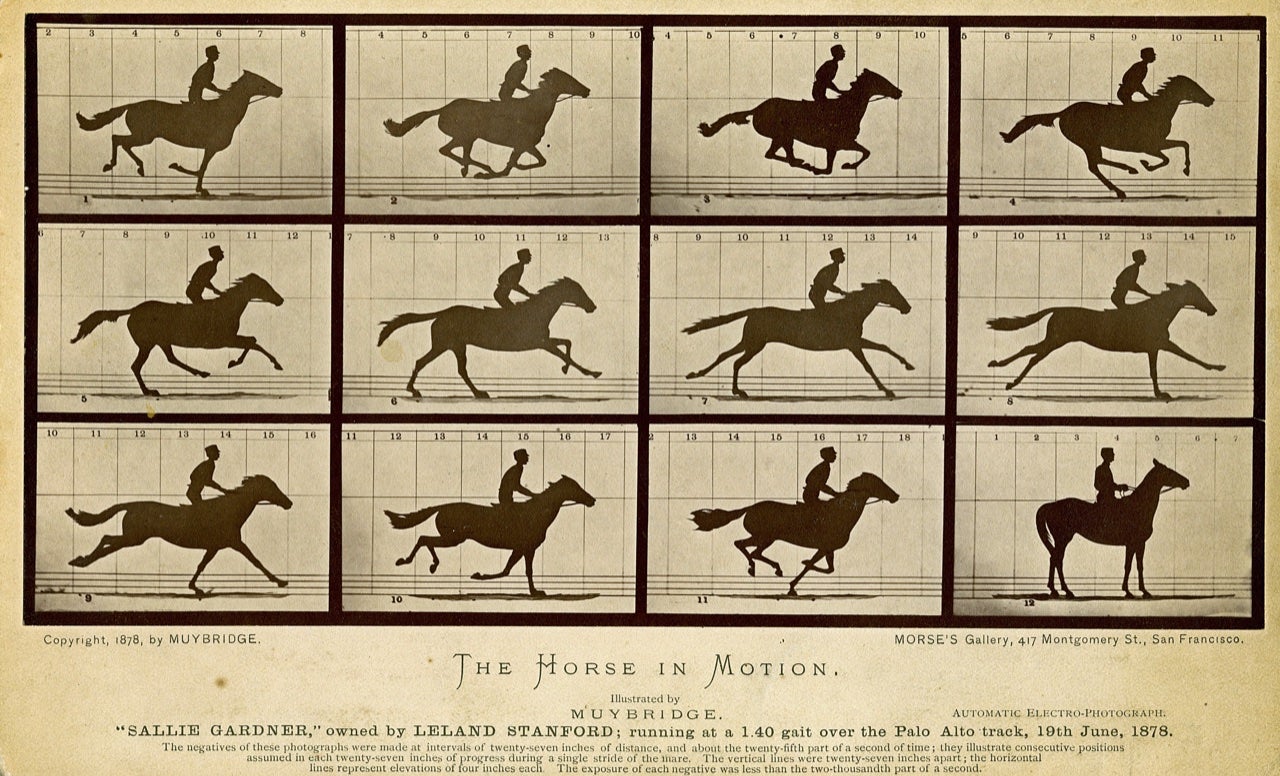 One of Muybridge's most recognizable works, "A Horse in Motion," was created by rigging several wet plate cameras. Courtesy of Marc Shaffer
SHARE

Today, Hollywood is a titanic industry churning out film after film. But what of its humble beginnings? Why can we synonymously say “motion picture” when referring to cinema? We owe much to a man named Eadweard Muybridge, a peculiar individual who loved photography as much as he loved changing his name. Now, the new documentary, Exposing Muybridge, is bringing to light his unconventional and fascinating past.

“I was blown away by his story. It was a blend of personal melodrama—ambition, betrayal, near-death experiences, even murder—and cultural criticism. Muybridge [is] living in an age of technological change, that’s much like our own, and also [one] saturated in sexism, racism, classism, and colonial expansion. [The story] seemed made for the screen,” director Marc Shaffer tells PopPhoto.

The film was recently awarded “Best Documentary Screenplay” at the Writers Guild Awards in March.

Who is Eadweard Muybridge?

Though he remains more obscure compared to other photography pioneers, Muybridge’s work has impacted artists and scientists worldwide—though many may be oblivious to it.

Born Edward James Muggeridge in 1830 in Kingston upon Thames, England, he changed his name several times throughout his life. He moved to the U.S. and eventually settled in San Francisco. After a six-year period back in England recuperating from a brain-damaging stagecoach accident, he returned to San Francisco with the name we now know. There, he worked extensively for the federal government, railroad and shipping companies, and magnates as he documented the American West (and Alaska).

More than a motion picture pioneer

Supported by the patronage of Leland Stanford, a railroad baron and politician, Muybridge became a pioneer of early cinema. His earliest work, A Horse in Motion, was shot on a wet plate camera and shows—you guessed it—a horse running. This would become the world’s first moving picture, leading to the development of cinema. At the time, however, a jealous Stanford tried to take credit (drama!), leading Muybridge to take his experiments to the University of Pennsylvania, where in 1887 he produced what is now considered his masterpiece, Animal Locomotion.

In that era, the idea of a moving picture was still considered ludicrous, but Muybridge helped to reshape the way people viewed and interacted with photography. “I hope viewers are provoked to think more deeply about how machine-made images, and the people who create them, shape the way we understand the world. Media is what connects us all to each other—beyond our own personal experience,” Shaffer says of the documentary.

Related: Best cameras for filmmaking on a budget

Animal Locomotion is composed of 781 plates featuring people and animals in various states of movement—they were deemed, “the first great photographic study of motion” from the moment they were released. However, though revolutionary, there’s still a cautionary tale of note that the documentary explores.

“I hope [people] come away from my film understanding that photographs (and films, especially documentaries) represent a point of view, and need to be cross-examined rather than taken at face value. Keep challenging the narrative,” Shaffer adds.

How to watch Exposing Muybridge

Exposing Muybridge will be available in the U.S. and Canada on-demand beginning August 2. Preorders on iTunes start in July. Additionally, the film will release worldwide, including in Australia, Spain, Scandinavia, and Hong Kong. It will also continue to appear globally at film festivals. Check the film’s website for future screenings.