They escaped Alcatraz 60 years ago, here’s what they may look like today

The US Marshals Service has released age progression photos of the only three people to ever escape San Francisco's infamous prison. 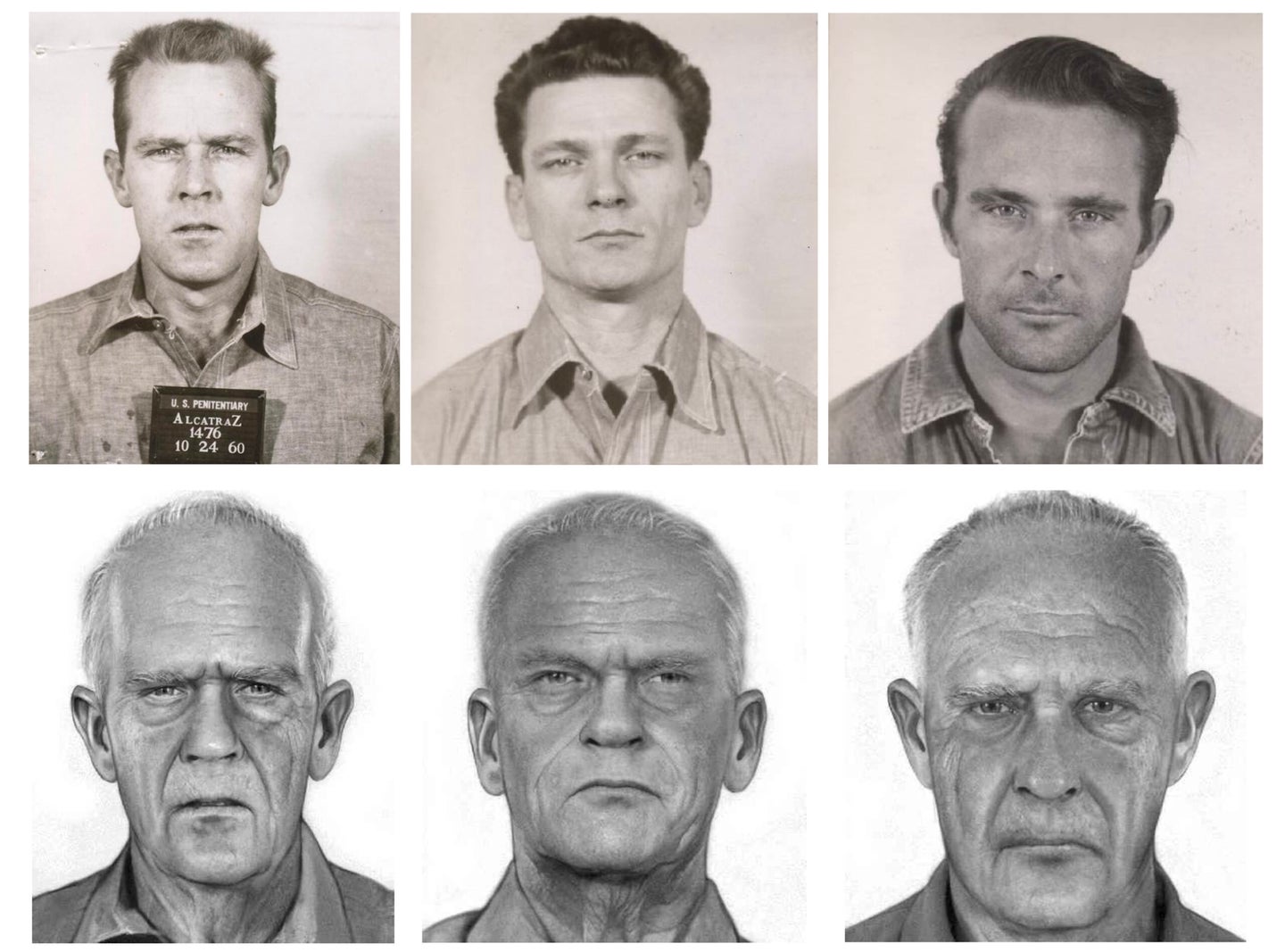 The US Marshals Service has released age-progressed photos of the three convicted bank robbers who escaped from Alcatraz Federal Penitentiary in 1962. Frank Morris, Clarence Anglin, and his brother John Anglin are still on the Most Wanted List 60 years after their infamous jailbreak. Assuming any of them survived the currents in the San Francisco Bay while fleeing the Rock (and that they also survived the intervening 60 years), all the men would be into their 90s.

And, if the age-progressed photos are anything to go by, looking pretty well.

We’ve got ourselves a jailbreak

On 11 June 1962, Morris and the Anglin brothers attempted their carefully planned escape. They had used improvised tools to remove the concrete around an air vent that led to a 3-foot wide utility corridor behind their cells. From there, they were able to climb to a roof where they’d built a raft stitched together from more than 50 stolen raincoats. To hide their attempt, they created papier-mâché heads (complete with real hair stolen from the barbers) that they left in their beds. It fooled the guards for long enough for them to get a 10-hour head start.

Whether the men escaped or not is a matter of much debate. The FBI’s investigation was closed in 1979 and concluded that it was unlikely that the men had survived the cold water of the Bay. The US Marshals’ investigation, however, remains open.

Also, every year people make the swim as part of the Escape from Alcatraz triathlon. The reality show Mythbusters recreated the escape attempt and declared it “Plausible”, after making it to the mainland in their raincoat-based raft.

So, assuming the men made it to shore (and there is some circumstantial evidence they did, hence the open investigation) what would they look like now? Well, that’s the job of forensic artists.

The age-progressed photos come courtesy of the FBI who employ forensic artists to do things like create composite sketches of suspects, recreate someone’s probable facial shape from their skull, and age-progress wanted criminals, missing children, and other people who vanished years ago.

While there are automated tools that can do this, forensic artists apparently rely on Photoshop. As a report on Today shows, they use existing photos of the person, as well as family photos and a general knowledge of how aging affects everyone to create the aged-up images.

While artists can’t predict things like hair, facial hair, glasses, or weight changes, there is some anecdotal evidence that they can be accurate, at least occasionally. How useful they are in general, however, is another question.

Are these three age-progressed photos likely to close the Alcatraz escape case? Nope. But if one of the escapees was found alive, they might well look a little bit like the recently released images.

Age progressing your own photos

If you want to age-progress a photo of yourself (and don’t have the requisite Photoshop skills) then check out FaceApp. You might remember it going viral a few years ago. It uses AI-powered filters to age-up any image. The results aren’t quite as realistic, but they’re still fun.