The work was captured with a 100-megapixel Hasselblad and is made up of 8,439 individual images. Explore all the fine details of this Golden Age work. 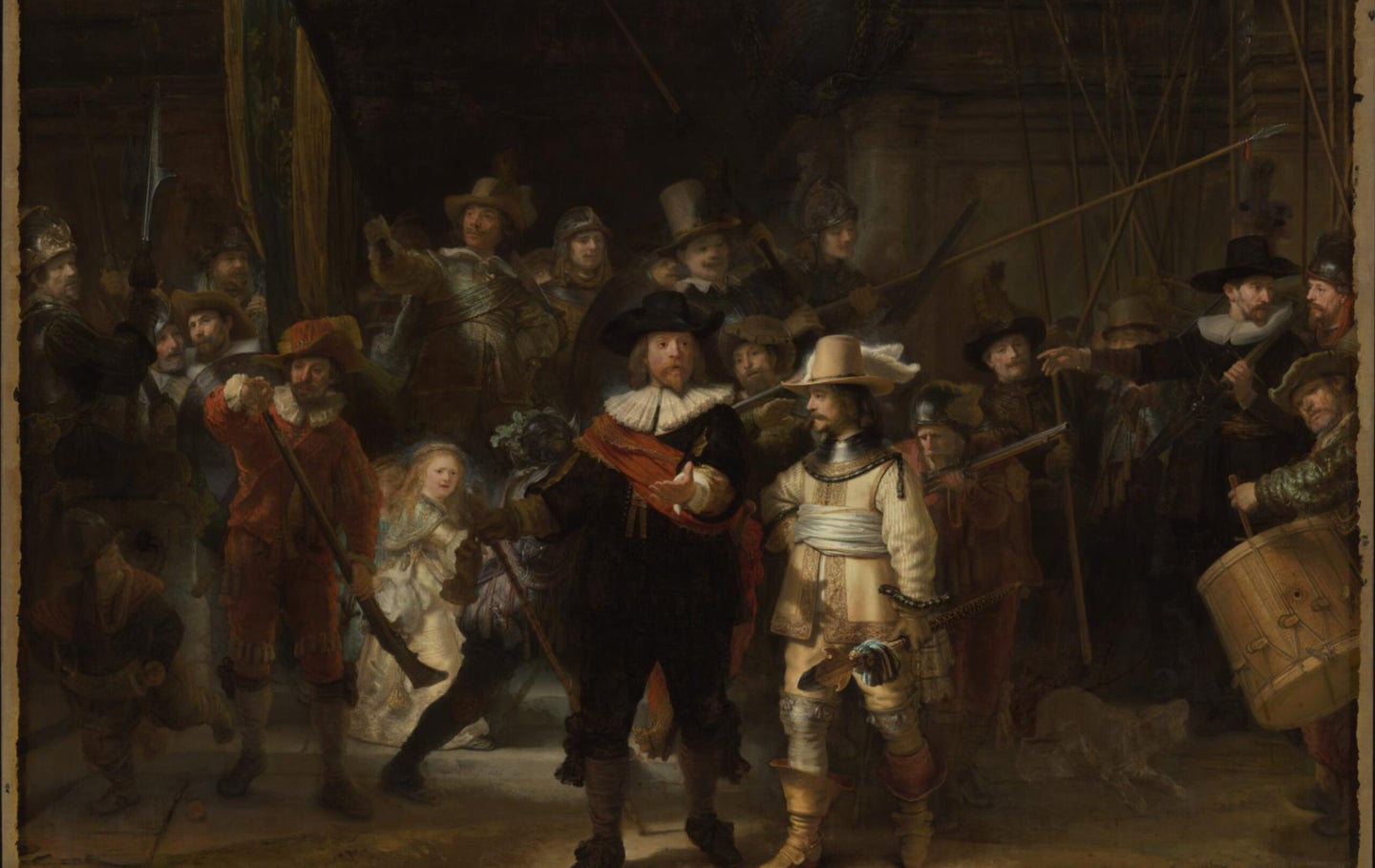 We, humans, love life’s finer details. And thanks to a team at the Rijksmuseum—the Netherlands’ national arts and history museum—one of Rembrandt’s most famous paintings has now been archived in finer detail than any work of art before. Using a 100-megapixel Hasselblad camera, researchers snapped and combined 8,439 individual images into a truly spectacular 717-gigapixel (717,000,000,000 pixels) resolution file. And the best part, you can explore it right here (scroll to zoom in and out!).

The artwork is entitled “Militia Company of District II under the Command of Captain Frans Banninck Cocq,” but it’s better known these days as “The Night Watch.” It’s a gigantic piece even before digitization, measuring nearly 14.5 feet across by 12 feet tall. Completed after several years’ work at the height of the Dutch Golden Age in 1642, it depicts members of a citizen militia led by Captain Banninck Cocq, who later became mayor of Amsterdam. Long coated in a thick, dark layer of varnish that led to its colloquial name, the painting was painstakingly restored in 2019.

‘The Night Watch’ has been digitized quite a few times before now, albeit at lower resolutions. A gigapixel scan was included in the Google Art Project—later renamed Google Arts & Culture—in 2011. And the Rijksmuseum followed up in 2020 with a 44.8-gigapixel version. But the new one simply blows past efforts out of the water when it comes to their resolution and the amount of detail shown.

The 44.8-gigapixel effort was stitched from 528 individual exposures arranged in an overlapping 24 x 22-image grid. That sounds like a lot until you learn that the new image was created from a staggering 8,439 individual exposures. Each of these mapped an area of 2.2 x 1.6 inches (5.5 x 4.1cm) using a Hasselblad H6D-400C MS camera body with 100-megapixel resolution.

Together, the images were stitched into one final output image with a whopping 5.6-terabyte file size. Precise dimensions for this final image weren’t stated, but based on its 6:5 aspect ratio and total pixel count, they’re likely somewhere in the region of 929,067,000 x 771,742,000 pixels. Presumably, the H6D-400c’s four-shot Multi-Shot capture mode was used as this also outputs 100-megapixel images (but the Rijksmuseum didn’t disclose this).

Comparing the results of this latest scan with its predecessors, the difference is stark. The once-noteworthy Google Art image, in particular, shows not only much lower resolution but is also lit very differently. That’s something of a double-edged sword. Google’s lighting gives more of a sense of depth to the brushstrokes, which are squashed flat in the more recent renderings (see comparison below). Those efforts more accurately reflect the colors in the original image, though, unlike Google’s shot which is full of small areas blown out by the lighting.

We’ve sprinkled a few comparisons of the scans in this article, but be sure to check out the full 717-gigapixel image to get the full experience. The level of detail is much easier to appreciate when you realize just how easily you can get lost within the image when fully zoomed in.

You can find yourself having lost all sense of what you’re looking at briefly, oddly convinced that you’re looking at a photo of a beautifully-marbled dessert up close, or perhaps a polished marble wall. Then you zoom out a good bit and realize where you’d lost yourself amongst the sea of brushstrokes laid down hundreds of years ago by one of the world’s greatest artists.

What the scan doesn’t show

Of course, they might be high-res, but looking at those crisply-rendered visuals on your screen can’t let you see those strokes in their three-dimensional glory. And nor can it give you the emotional experience of visiting the Rijksmuseum to see Rembrandt’s creation in person. Clearly, there’s still a place for the real artworks in real museums visited by real people.

But with this level of detail, it’s equally true in reverse: The general public might never be allowed close enough to the real thing to perceive the very finest details. Now, you can do so without leaving the comfort of your own home.