NASA Releases “Pillars of Creation” Image Captured by the Hubble

The upgraded version of a famous space image is absolutely stunning 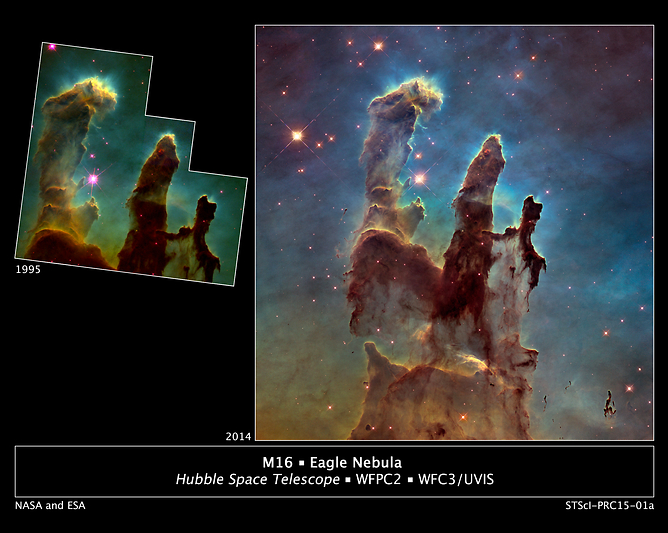 NASA has just released a new image (below) that is truly one for the ages. The Hubble Space Telescope made a return to the “Pillars of Creation,” otherwise known as three giant columns of cold gas.

This image has been capture before by NASA in 1995, and became one of their most noted and popular photos. To celebrate Hubble’s upcoming 25th anniversary in April, it made a return trip to the site of that iconic photo.

The new image is sharper and wider, and was captured in both near-infrared light and visible light. The image also reveals newborn stars within the pillars. “The infrared view transforms the pillars into eerie, wispy silhouettes seen against a background of myriad stars. That’s because the infrared light penetrates much of the gas and dust, except for the densest regions of the pillars,” says NASA.

While the nebula has been named after the act of creation, it appears that it might be taking a turn in the opposite direction. Paul Scowen, who led the original Hubble observations of the Eagle Nebula, says, “The ghostly bluish haze around the dense edges of the pillars is material getting heated up and evaporating away into space. We have caught these pillars at a very unique and short-lived moment in their evolution.”

The two images not only give insight into the way the nebula is growing and changing, but also serve as truly breathtaking works of art showcasing photography’s ability to capture the transiency in the world.