How do you identify the owner of a 70 year old camera and roll of film in the forests of Luxembourg? 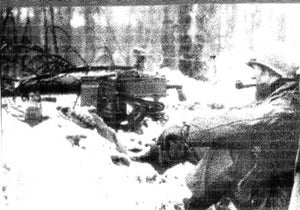 Technician 5th Grade Louis J. Archambeau was one of the many American servicemen who lost his life in the Battle of the Bulge, defending against a German offensive in the Ardennes. But it wasn’t until almost 70 years later that his belongings were discovered in a foxhole in the forest, and with them, a camera loaded containing a roll of film with which he captured some of the last images of his life.

U.S. Navy Captain, Mark Anderson and Luxembourg Historian Jean Muller discovered the foxhole in Luxembourg while looking for artifacts from the Battle. In it, amongst other things, was a camera that still had a roll of film loaded in it. A roll of film that was still in good enough condition to be developed and scanned, leading to this haunting set of images.

Either due to age, preservation, or scanning, the images aren’t in fantastic shape. But they do provide a glimpse into what were probably the last days of Archambeau’s life. And thanks to the camera and the personal effects, TheTroubleshooters.com site was able to identify Archambeau, discover his regiment, and even get in touch with his surviving family—which is what lead to one of his descendants posting the images and information to Reddit.

It’s astonishing that the film lasted as long as it did, through some pretty rough conditions, and it does make us wonder that if a camera with a memory card were discovered in 70 years time, if it would still be in good enough condition to read, and if the technology to read it would even still be around.

UPDATE: Unfortunately, it looks like these images aren’t what they seem. Apparently, at least two of the photos are from other collections, and it looks like someone along the way may have introduced the fakes. Here’s what Archambeau’s family member posted to Reddit:

We’re also saddened by this—it was a great story, and a great find, ruined because somewhere along the line, someone presented false images as originals.