All laid out in an easy to read map 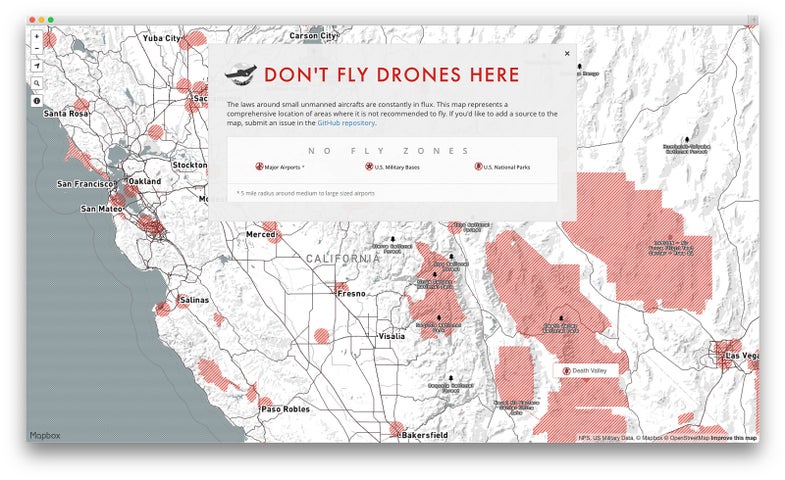 In the USA, there are three major rules that govern where you can and can’t fly your photography drone. To put it simply, you’re not allowed to take to the skies over US National Parks, US Military Bases, or within a five mile radius of a decent sized airport. Don’t Fly Drones Here pulls that information into an easy to read map, so you don’t have to grab a compass to figure out if you’re too close to an airport or not.

This map admittedly doesn’t take into account local ordinances that may ban them from certain places (which is definitely a thing that’s starting to happen), and there’s still an overall ban on their use for commercial work. But if you’re just doing some photography, this map provides an excellent guide to where you need to be careful about using a remote operated drone.

For the vast majority of the country, you’re probably in the clear. When it gets interesting is in major cities with multiple airports, such as around New York City and San Francisco, where the five mile radius rule can dominate much of the city. Good luck anywhere between San José and Palo Alto. And a big part of Manhattan’s Upper East Side and Central Park fall within the range of La Guardia.

Since this is an open source project, you can add further data to it, if you have. So next time, before you take your DJI Phantom out for a spin, make sure you’re in the clear.

[ED. NOTE: This isn’t a legally binding map and it doesn’t include all the areas where drones are banned. It’s just meant to be used as a guideline. So, don’t go trying to tell the cops about a map you saw on the web. You’ll probably just end up getting into more trouble. Do the research before you take your drone out.]