One new lens, one that we now know more about, and some unfortunate delays 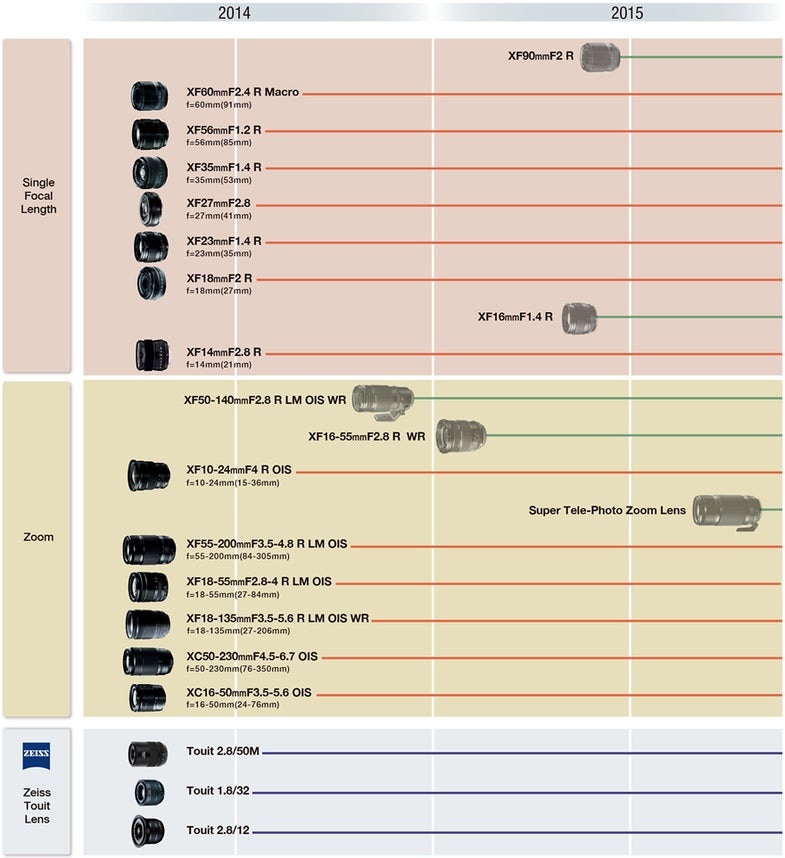 Fujifilm has updated its X-mount lens roadmap, revealing more information about two lenses, but also shifting back a few dates in a way that will doubtless frustrate some people.

Totally new in the roadmap is the XF90mmF2 R, set to launch in late 2015. This previously unhinted lens will have a 35mm equivalent 135mm focal length, making it appropriate for a long portrait lens, and one with a large enough aperture for a narrow field of view. The roadmap has now also specified what was previously just known as the “high speed wide angle lens”, which we now know will be XF16mmF1.4 R. Unfortunately, this has been pushed back from mid-2014 to early-2015. This 24mm equivalent lens will surely be a big draw for street shooters.

Other changes in the roadmap are the water-proofed XF16-55mmF2.8 R WR, which was originally scheduled for later this year, but has now been bumped to Spring 2015; and the as yet unspecified “super tele-photo zoom lens” which has been tweaked slightly from an overall 2015 release to a more specific “Winter” release window.

Fujifilm’s frequent and public updating of the lens roadmap has made it easy for X-mount photographers to stay on top of what lenses are coming out, and to purchase appropriately. And if Fujifilm sticks to this schedule, it’ll be a total of 21 lenses by the end of 2015—a situation not to be scoffed at.