Matthew Cetta makes his "Photogenic Alchemy" available to all 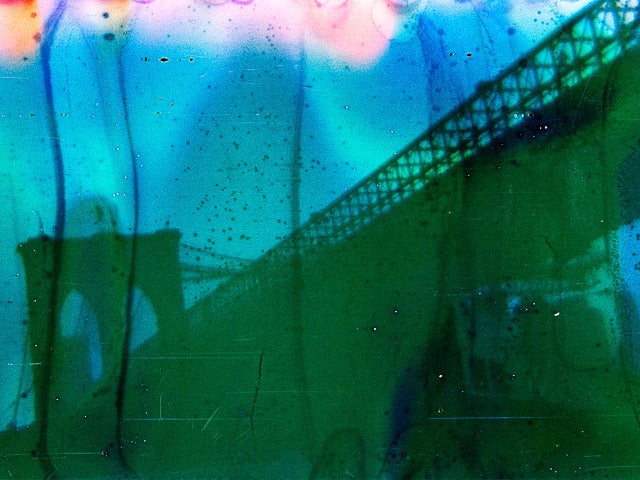 Last year, photographer Matthew Cetta got a huge amount of attention for a photographic series he did called Photogenic Alchemy. In it, he took film, and treated it with liquids like ammonia, olive brine, absinthe, iodine, and more, before using the film to shoot. The images came out warped and twisted, each one unique and modified in a way that can’t be replicated. Now, he’s attempting to bring that same bizarre chaos to the masses, with a Kickstarter called Flim (sic).

With Flim, Cetta is attempting to start the mass production of his modified films, selling them to public so that they too can experience randomly mutated analog shooting, the randomness of which digital versions can never quite meet. As he puts it, “We try so hard to mimic film, spending countless hours in photoshop and lots of dollars in apps. But it never comes out right. With digital every preset, every filter is the same. Film is not limited to bits. It’s not held back by ones and zeroes. Film can be random. Chaotic.”

Cetta is looking for $10,000 for the Kickstarter—a relatively reasonable amount compared to some projects that we’ve seen. However, we wish that the project would be a bit more specific about what the final offerings will be. He mentions that he has film treated with lemon juice, ammonia, and Drano, and even some that were left outside during an intense winter. However, he doesn’t say if those are what he’s going to have for sale, what the final price will be for the film in his store, or what types and formats of film he’ll have available.

There’s obviously a market for concepts like Flim. The widespread adoption of Lomography is definitely an attempt to recapture the inherent randomness of abused film, and the widespread coverage of Cetta’s Photogenic Alchemy last year likewise shows that people are interested in his methods. But you’ll need to back this project by at least $50 to get a roll of Flim, and there’s still an awful lot about it that we don’t know.