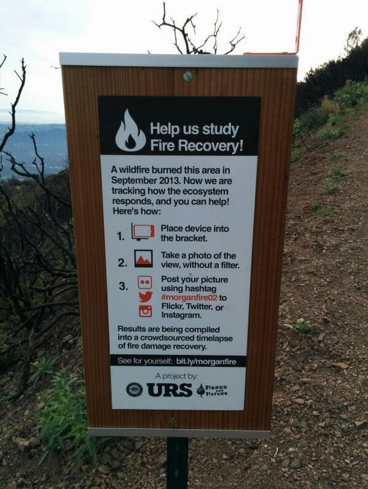 If you mention hashtags or Twitter in general to some people, they’re quick to dismiss it as noise and nonsense. Sometimes they’re right. But, the potential for awesome ness is definitely there, as demonstrated by this cool initiative known as #MorganFire.

Mount Diablo State Park was subjected to a gnarly wildfire just last year. Now, scientists are hoping to track the regrowth process. There are several little brackets throughout the park intended to hold a smartphone. When you put your phone into the bracket and take a photo, it replicates the composition taken by all those before you. Then, you’re supposed to tweet out the photo (or share via Instagram) with the hashtag indicating which station you were at when taking the photo.

The result, hopefully, is an interesting time-lapse like collection of images showing the park as it recovers.

Now, the actual scientific value of the images is somewhat questionable, but one of the express purposes of the project is to raise awareness about the fire and wildfire safety in general. With all the media attention this is getting right now, it seems like it’s working.

Right now, the hashtag is a bit dominated by people taking pictures of the actual sign, which isn’t’ quite the point, but once the hype dies down a bit, this could turn out to be a pretty cool project.