MIT Algorithm Predicts What Makes Photos Popular On the Web

Want to rake in those Instagram likes? Go with the color red, animals, and scantily clad women 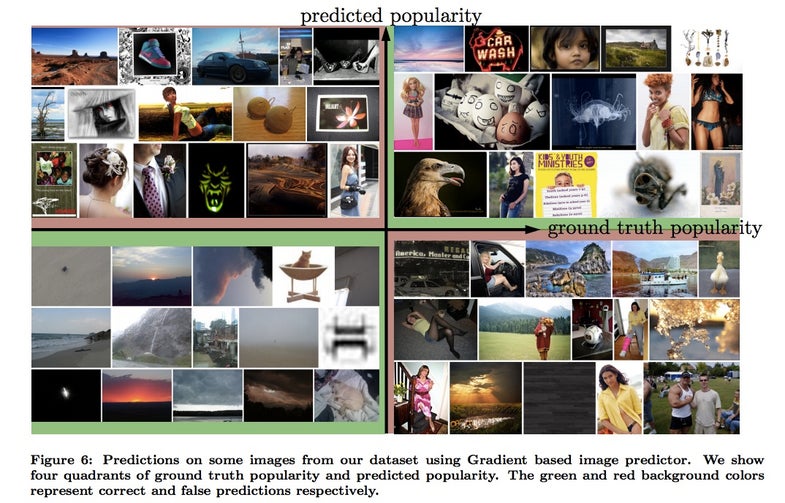 By analyzing millions of images from Flickr, an MIT researcher has discovered some of what makes an image popular—and frankly, it’s more or less what we were expecting.

Aditya Khosla, a PhD candidate at MIT’s Computer Science and Artificial Intelligence Lab analyzed 2.3 million images from Flickr, and through a combination of both automatic image analyses, image content, and social cues, was able to predict how well each image would do. And while the data comes from Flickr, it probably holds just as true for most other image based social networks, too.

There’s a simplified version of the calculator available online (though with all the attention, it’s been slightly overwhelmed). For a more in-depth look at the analysis and predictions, you should dive into the paper itself. Here are some factors that Khosla identified:Colors:

Anecdotally, this matches up with a lot of what we’re used to seeing. The popularity of items related to scantily clad women and cute animals; bright and poppy colors; and already being a well-established user inside of Flickr’s community. One thing that would be interesting is to see if the same factors translate across other social networks universally. 500px tends to have a different aesthetic than Flickr to Instagram to VSCO Cam to Facebook. Do these truths transfer, or are they Flickr specific?

Meanwhile, the online algorithm gave this shot of my cat a popularity of 4.146, which, quite frankly, I’ll take.