How The Vatican Plans To Digitize Its Library

Through years of scanning, this incredible archive of historical works will be viewable by anyone 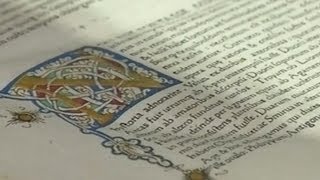 The Vatican Library is one of the greatest historical archives on the planet, a centuries old institution with a millennia of documents tucked away. But the extreme fragility of many of these original items means that very few people ever get to see them. But that’s all set to change with a new initiative to digitize the library, and allow anyone to peruse it.

The Vatican has partnered with Japanese firm NTT Data for a pilot program to scan some 3,000 of 82,000 documents in the library. Some 50 professionals over the next four years will digitize this first section of the archive using five scanners. According to the Wall Street Journal, NTT Data has been working on a special scanner specifically for this project. They feature a protective screen to limit exposure to light, and will be used in blacked out rooms to limit possibly damaging external light. All operators will be forbidden from wearing jewelry and will wear gloves to provide the utmost protection for the precious documents.

Once scanned, the documents will be “formatted for long-term storage”, and then released online for viewing, starting later this year. The first four-year interval will cost NTT Data $25 million, as the company has agreed to cover the first stages. Hopefully, if successful, further digitization can be done at a faster pace, as at a rate of 750 documents per year, it would take more than a century to complete the entire archive.