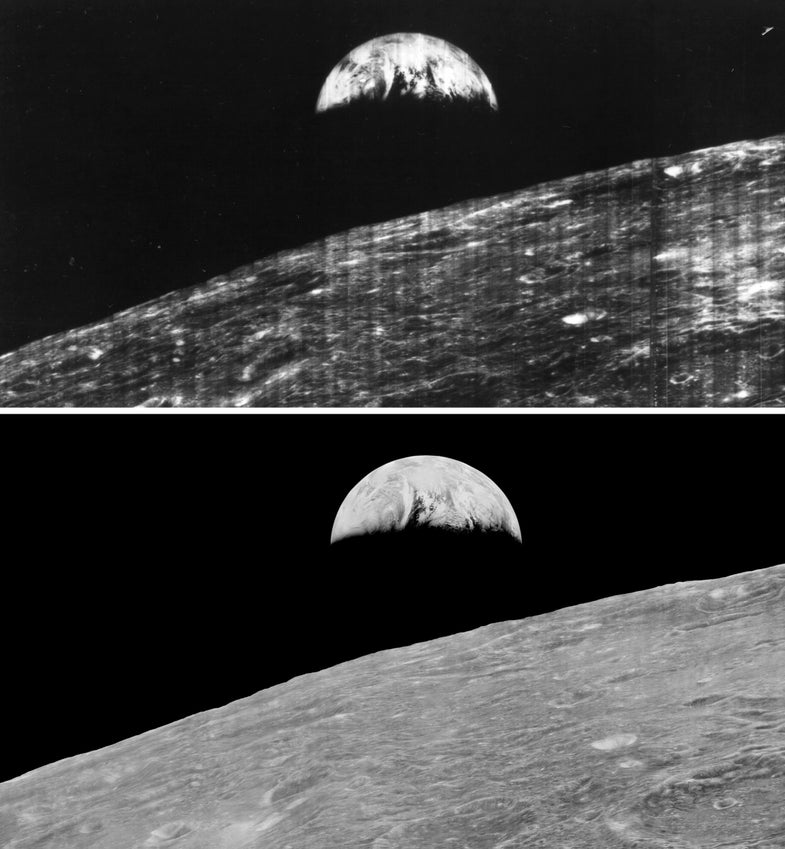 In 1966 and 1967, the Lunar Orbiter was sending back the first ever images of the Earth taken from the Moon, years before the Apollo program would touch down. Using technology that now seems almost primitive, the first ever full view of the Earth was captured, and beamed back to our planet. While never the most popular of the early space photos, this Earthrise image and its companions were immensely important, and were stored on magnetic tapes for printing using then bleeding edge technology. Now, decades later, these images have been restored thanks to a team of dedicated hackers known as the Lunar Orbiter Image Recovery Project (LOIRP).

As you can see in the top image, the photos as they were originally beamed down were in fairly rough shape, but the data itself was still there to be further analyzed—and cleaned up. The LOIRP set itself up in an ex-McDonalds restaurant, and set about restoring those images. Its first breakthrough came in 2008, and now Wired Magazine has profiled this incredible set of people.

The LOIRP has recovered some 2,000 images from 1,500 data tapes, finally completing the entire archive. Perhaps the most impressive facet of this is how they had to go through and piece back together old machines and computers to get the raw data off the tapes, and then convert it to a more modern format. Anyone who has ever found an old zip disk at the back of a drawer has probably mulled over how to get the files off of it—now imagine that for technology from the late 60s. LOIRP even had to go as far as finding a substitute for whale oil to properly lubricate tape heads.

The Wired article is a deeply fascinating read, and we thoroughly recommend having a look over it. And we can just remain thankful that the LOIRP team have managed to save some of the earliest images from space, which might otherwise have been lost to all time.