Watch Superman Save Metropolis Through a POV Action Camera

Given how many GoPros on animals we've seen, a GoPro on a hero seems a natural evolution 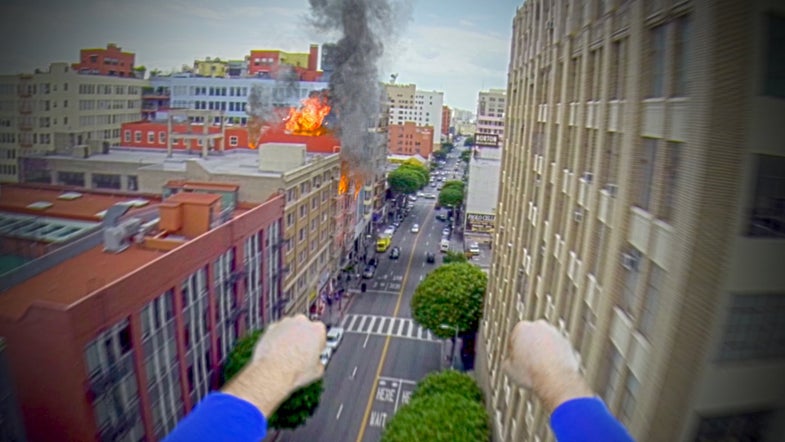 The folks at Corridor Digital have taken everyone’s love of sticking a GoPro on any moving thing they can get hold of, and taken it to its heroic conclusion—they slapped a GoPro on Superman’s chest while on patrol.

OK, so that might not actually be Superman (everyone knows that Metropolis doesn’t look that much like LA), it’s still an impressive piece of production work, one that combines GoPro work on the ground with footage from a DJI Phantom 2 for aerial work. In order to get the Superman point of view for the flying shots, the Phantom footage had to be sped up significantly to get the feeling of zooming around a city, and then a set of arms were digitally added.

You can see a lot more about how the video was shot in the behind the scenes video, which is also below. What was actually done really well was the transition from the ground level action to the flying shots, which had to be spliced together from two different GoPro clips, but managed to be merged seamlessly in the final project.

Hopefully this starts a trend of heroic one-upmanship with GoPro clips, and someone will soon stick one on the Silver Surfer’s surfboard as he cruises the cosmos.

behind the scenes
Gopro
news