To mark a program to study gamma-rays in lightning bolts, NASA has released a couple of interesting photos taken from the ISS 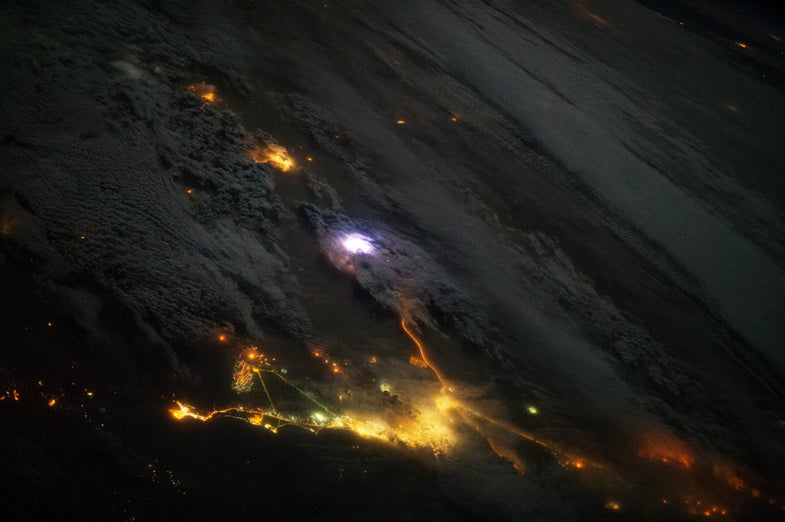 Usually, when you hear the words gamma rays, you probably think nuclear explosions and solar flares (and probably the Hulk). But it turns out gamma ray blasts are being produced every day on Earth during lightning storms. With NASA observing these events thanks to a recently new instrument, the agency has released some shots of what exactly lightning looks like from the ISS.

Across the planet, lightning bolts happen more than four million times a day, and of those, up to 500 are what’s called terrestrial gamma-ray flashes (TGFs). These rare flashes produce gamma rays, and it’s up to the ISS’s new Firestation instruments to record these events, and try and pick apart why they happened.

“The fact that TGFs exist at all is amazing,” said Doug Rowland, the principal investigator for Firestation and a space physicist at NASA’s Goddard Space Flight Center. “The electron and gamma-ray energies in TGFs are usually the domain of nuclear explosions, solar flares, and supernovas. What a surprise to find them shooting out of the cold upper atmosphere of our own planet.”

The Firestation instrumentation was installed in August 2013, and a Lightning Imaging Sensor (LIS) is planned to head up to the ISS in 2016. But if you’ve ever wondered what lightning looks like from orbit, here are two shots, courtesy of NASA. The top image comes from December 2013, and was recorded with a Nikon D3s and an 85mm lens, and shows lightning near Kuwait and Saudi Arabia. The second image is from 2011, was captured using the same model camera but with a 180mm lens, and shows lightning behind a thunder head in Bolivia.