It's blurry, packed with celebrities, and now it's the most popular photo ever tweeted 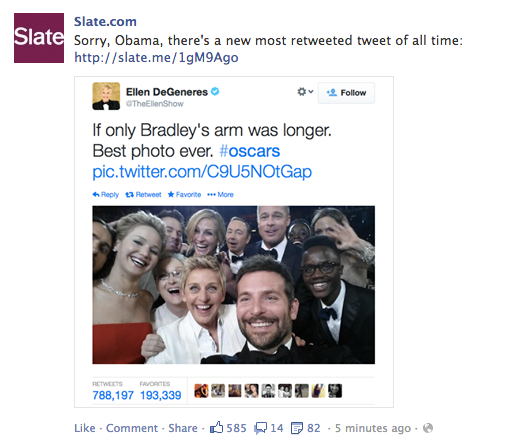 Tonight on the Oscars, host Ellen Degeneres tried to set the record for the “most retweeted photo.” She gathered up some famous people, plunked them in front of a smartphone she was being paid to promote, and mentioned it on TV. The result? One of the most popular photographs ever posted on one of the world’s biggest social media networks.

It’s just like Andy Warhol said, “My idea of a good picture is one that’s in focus and of a famous person.” This one is halfway there, I guess. Thanks for the pageviews, Ellen.

That said, I totally get that a photo need not be a masterpiece to be important. But, it’s nice when a photo represents a moment that isn’t completely manufactured. For the record, the last photo to hold the most RT’d title was a celebratory photo from Barack Obama after his reelection. A historic moment, regardless of your politics.