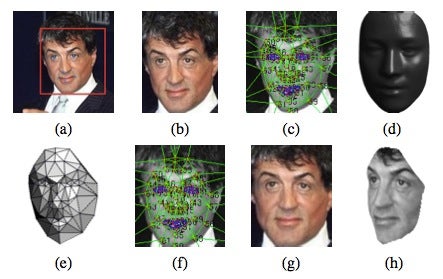 If you’re paging through a big set of photos, you probably don’t have much trouble spotting if the same person pops up multiple times. In fact most humans can match two faces 97.55% of the time. Now Facebook’s DeepFace technology has almost matched this, correctly recognizing the same features 97.25%—within spitting distance of human performance.

Keep in mind, this technology isn’t facial recognition (putting a name to a face), but facial verification (matching two faces together). But given Facebook’s unparalleled collection of photos tagged with your identity, moving from one to the other wouldn’t be hard.

DeepFace works by looking at a photo of your face, then correcting the angle of it using a 3D model of an “average face”. From there it can identify key features and a “description” of the face, which can be compared to other, similarly analyzed images.

For now, DeepFace isn’t coming to your Facebook timeline. As the Technology Review reports:

But sooner or later, you can be sure it’ll transition to helping you tag photos—assuming the intense processing power behind it can be tamed to the point where it can be used to crunch the numbers on the obscene volume of images that get uploaded to Facebook daily.