How LED Streetlamps Could Change the Look of Night Photography Forever 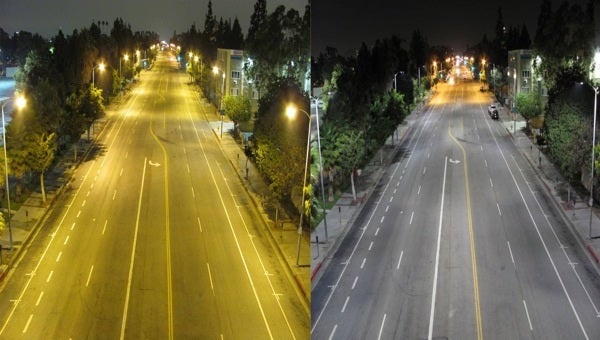 Night photography in big cities has a very specific look. The ugly color cast by your standard sodium streetlight has become so common, that it many cities it’s hard to imagine everything not looking dipped in orange after the sun sets. But with both LA and New York moving towards more neutral LEDs, the way our night photographs and videos look is about to change massively.

LA has completed the world’s largest retrofit of LED street lights, and, as you can see in the before and after above, it has resulted in significantly different look of light for the street. Over at NoFilmSchool, Dave Kendricken has broken down some of what this means in terms of the history of film, and how things will look now.

Films have long made use of the orange/yellow color cast of the high pressure sodium vapor lights, which produce an extremely limited spectrum of light. As NoFilmSchool points out, the yellow light was a key part of the movie Collateral, and we’d say Drive counts on there, too. Now, with new, more neutral LEDs in place, colors will look far more accurate when you’re taking photos or video—but we’ll be losing a key visual shorthand for when a scene’s shot at night. Give it a few years, and yellow lit streelight scenes might seem as out of place as a rotary telephone. And the tungsten white balance setting on your camera will be getting a lot less use.