At what point is a painting of a photo "transformative"? 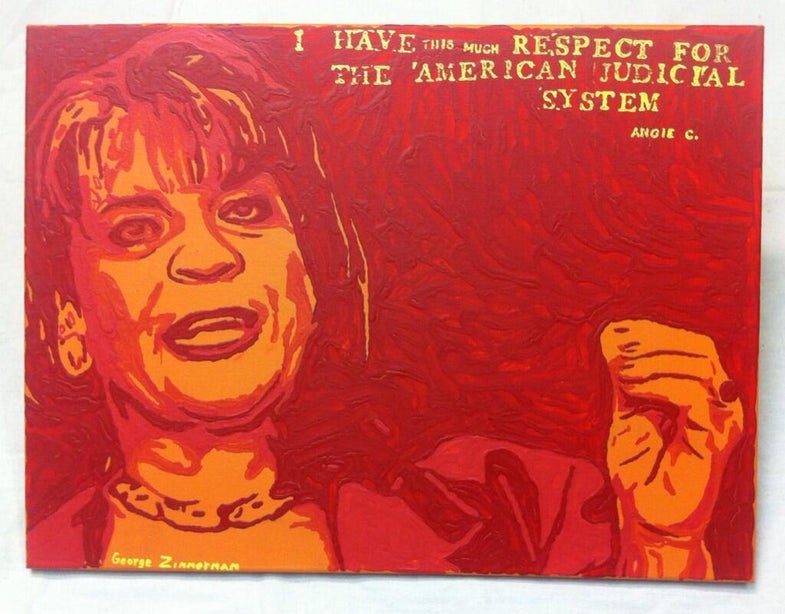 George Zimmerman, the man accused, and then found not guilty, of the murder of Trayvon Martin has turned to painting to raise funds in recent months. But now his penchant for basing his images on the photography of others has landed him in hot water, with the original photographer of his newest painting filing suit against the man.

The painting was revealed over Twitter last week, and is a stylized rendition of a photograph of Florida State Attorney Angela Corey. The image it’s based on was taken by an Rick Wilson, an AP photographer, in April 11, 2012 when Corey announced that Zimmerman was being charged.

Now, a lawyer representing Wilson has said they will take legal action over the image, stating, “You just can’t do that. You just can’t take somebody else’s work and make it your own.” Meanwhile, the AP has also sent a cease-and-desist letter to Zimmerman over the painting.

Zimmerman’s previous efforts at painting netted him more than $100,000 on eBay, and was also accused of being based on an existing image.

The case immediately brings to mind the long-running battle that was waged between the Associated Press and Shepard Fairey over the original photographic basis for his widely used “Hope” image. The two parties eventually settled out of court.

Now it remains to be seen if a judge will rule that making a painting of an existing photograph is considered “transformative” enough for this to be a fair use situation. If establishing a precedent, this could have an unforeseen and significant impact on a number of artists within the pop-art field—Roy Lichtenstein would have had a much harder time if the original comic artists had been able to exert copyright over his adaptations of their work.