By retouching the corner of a photo, Narciso Contreras has been cut from the AP 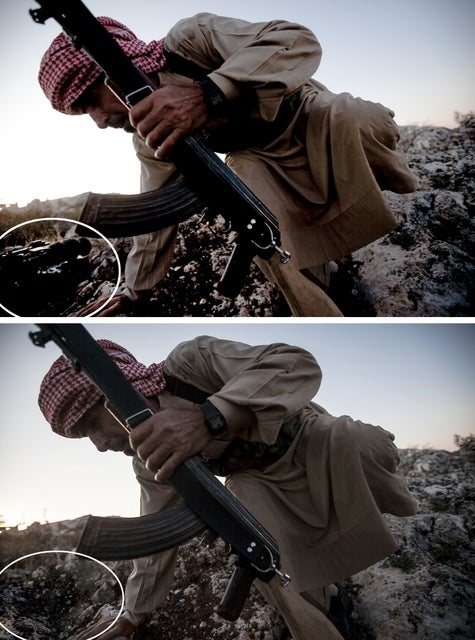 In 2012, Narciso Contreras was one of a cadre of five photojournalists who won the Pulitzer Prize for their work in Syria for the AP. Now, after being caught removing an object from one photo, Contreras has been cut from the agency, and his entire back catalog of images removed from distribution.

Contreras originally snapped a picture of an opposition fighter in September of last year. He then digitally removed a video camera that was in the bottom left corner of the frame, clone stamping in a rock formation instead. The video camera wasn’t particularly invasive in the scene, but Contreras opted to remove it—and in doing so, fell afoul of the AP’s strict editing guidelines, which state “No element should be digitally added to or subtracted from any photograph.”

The AP has put out an article and a blogpost on the incident, and after having examined some 500 of Contreras’ other images, has determined that this was the only example of such editing. AP Vice President and Director of Photography Santiago Lyon is quoted as saying:

It seems curious that Contreras would edit just this one image, and remove an object that seems fairly non-intrusive, so you have to wonder on his motivation. You’d assume that he knew the AP hard line stance on the matter, and one wonders if the video camera might not have lead to accusations of the shot being staged. Contreras expressed his regrets on the matter, saying

The AP obviously has to be extremely strict in these situations, in order to preserve its reputation as an un-biased news source. But as is always the case with ethical issues around photo-editing, it raises more questions about where the line must be drawn for photoshoppery.