Woman Takes a Selfie As a Man Threatens Suicide, Ends Up On the Cover of the New York Post

Probably should've kept the smartphone camera in that pocket 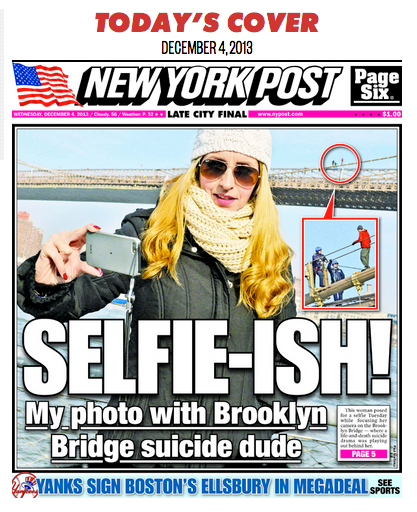 I’ve gotten used to putting the word “selfie” in quotation marks, but now that it’s a full-blown word, I don’t have to do it anymore. We’ve heard a lot about smartphone self-portraits this year, but today there’s one on the cover of the New York Post.

A man on the Brooklyn Bridge was considering suicide while authorities tried to talk him down. A female bystander decided to take a selfie with the scene in the background. At that moment, a photojournalist grabbed a shot of her in the act. That photo ended up on the cover of the New York Post with a shaming headline.

The woman preferred not to identify herself, which was probably a smart move on her part, but the internet is _very _ good at solving mysteries, so we wouldn’t be surprised if she were to be identified sooner than later.

It’s an interesting scenario that’s playing out. Is it stupid to take a photo of yourself in front of a scene like that? I think so. But, what if the woman was simply taking a photo of the scene without injecting herself into it?

What do you think? Does she deserve a front-page call-out?