How do you spin such a heavy and expensive rig? 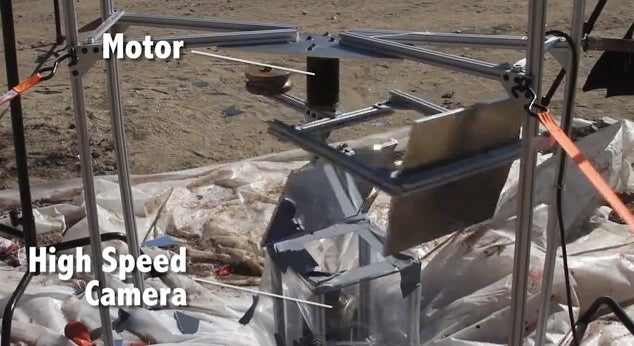 In May, we reported on a DIY way to do a Matrix-like “bullet time” using a GoPro and a ceiling fan motor. By spinning the GoPro around the subject at high speeds, it could be captured at all manner of angle. But engineer Mark Rober wasn’t satisfied, and decided to make the rig high-speed, with help from a Phantom high speed camera, and some impressive building skills.

Unfortunately, the Phantom itself was too heavy and expensive to put in danger. So instead, Rober got the help of another engineer friend, and together they constructed an incredibly impressive mirror rig. Rather than rotate the camera, a series of spinning mirrors are put in place that direct a beam of light down to the Phantom itself, which can capture the high speed footage.

The setup still has some problems, despite a number of redesigns. The mirrors and protection on the camera lead to the images looking very soft and fuzzy — especially when pared with the 50mm lens needed to let in enough light for the 7,200fps video. There’s more of a discussion about what went into the design and building over at Gizmodo, and it’s an intriguing build.

Even with its limitations, the clips the setup produces are astonishing. The work with water balloons is particularly impressive looking, even the ones which don’t pop. We can’t wait to see what Rober does next!