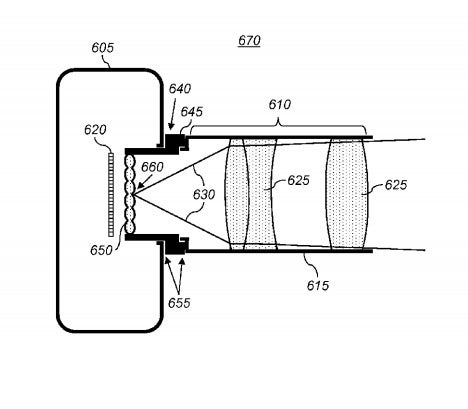 When the Lytro was first announced in 2011 we were wowed by the potential of light field photography. And it seems we weren’t the only one, as soon after, Apple filed its own patent for a plenoptic lens, a patent which it has just been awarded.

What makes Apple’s patent newsworthy is that it’s for more than just a microlens array that would allow you to focus after the fact. It’s actually for a plenoptic adapter, a microlens system that would sit between a standard lens and the sensor, but then could be moved out of the way to function as normal. So rather than being stuck with low size and quality light field photos that you can focus after the fact, you could switch between that and standard imaging at will.

Here’s how the patent describes it:

It’s not hard to imagine how a patent like this would be useful. The major downside of the Lytro system is that the images simply aren’t that great, despite being very interesting. By being able to swap at will between plenoptic and normal photography, you would just be able to use whichever one you’d find most useful at the moment.

Now the big question is how, and if, Apple will use this patent. A great number of such developments never see the light of day, and are just kept in the company’s patent library, unused. But, theoretically, this microlens adapter could work with just about any camera, as long as there’s space to move the array out of the way when not in use. The patent even takes time to mention DSLRs, saying:

We’ll just have to wait and see what Apple has in mind for this patent.